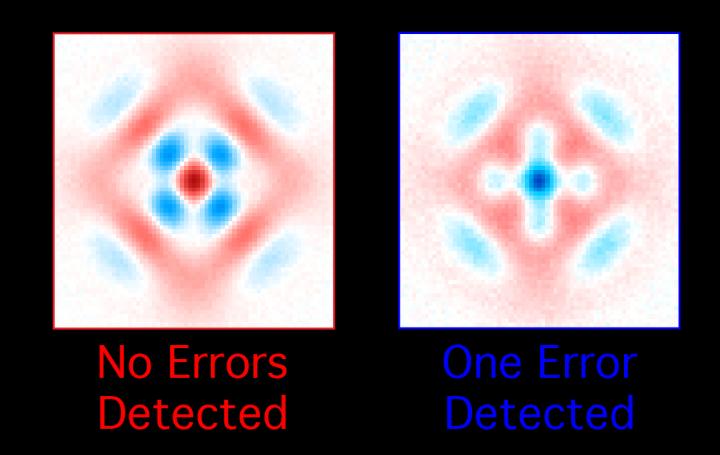 A representation of the quantum state in the new Yale device. Crucial to its success, the researchers say, is the ability to successfully detect and sort errors. Credit: Yale University

For the first time, researchers at Yale have crossed the “break even” point in preserving a bit of quantum information for longer than the lifetime of its constituent parts. They have created a novel system to encode, spot errors, decode, and correct errors in a quantum bit, also known as a “qubit.” The development of such a robust method of Quantum Error Correction (QEC) has been one of the biggest remaining hurdles in quantum computation.

The findings were published online July 20 in the journal Nature.

“This is the first error correction to actually detect and correct naturally occurring errors,” said Robert Schoelkopf, Sterling Professor of Applied Physics and Physics at Yale, director of the Yale Quantum Institute, and principal investigator of the study. “It is just the beginning of using QEC for real computing. Now we need to combine QEC with actual computations.”

Error correction for quantum data bits is exceptionally difficult because of the nature of the quantum state. Unlike the “classical” state of either zero or one, the quantum state can be a zero, a one, or a superposition of both zero and one. Furthermore, the quantum state is so fragile that the act of observing it will cause a qubit to revert back to a classical state.

Co-lead author Andrei Petrenko, who is a Yale graduate student, added: “In our experiment we show that we can protect an actual superposition and the QEC doesn't learn whether the qubit is a zero or a one, but can still compensate for the errors.”

The team accomplished it, in part, by finding a less complicated way to encode and correct the information. The Yale researchers devised a microwave cavity in which they created an even number of photons in a quantum state that stores the qubit. Rather than disturbing the photons by measuring them — or even counting them — the researchers simply determined whether there were an odd or even number of photons. The process relied on a kind of symmetry, via a technique the team developed previously.

“If a photon is lost, there will now be an odd number,” said co-lead author Nissim Ofek, a Yale postdoctoral associate. “We can measure the parity, and thus detect error events without perturbing or learning what the encoded quantum bit's value actually is.”

The cavity developed by Yale is able to prolong the life of a quantum bit more than three times longer than typical superconducting qubits today. It builds upon more than a decade of development in circuit QED architecture.

Schoelkopf and his frequent Yale collaborators, Michel Devoret and Steve Girvin, have made a series of quantum superconducting breakthroughs in recent years, directed at creating electronic devices that are the quantum version of the integrated circuit. Devoret, Yale's F.W. Beinecke Professor of Physics, and Girvin, Yale's Eugene Higgins Professor of Physics and Applied Physics, are co-authors of the Nature paper.