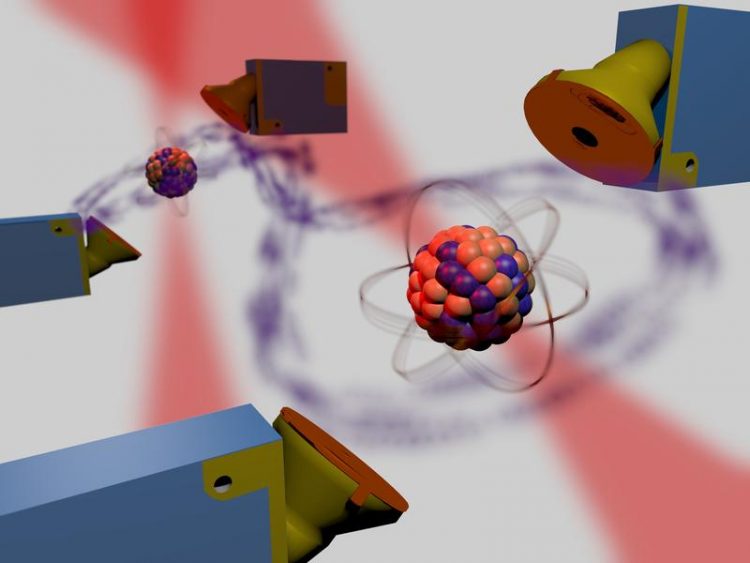 Artist’s view of the experiment in which two atoms are being entangled over a distance of 400 metres. (Graphic: Wenjamin Rosenfeld)

“Nature is different from what we observe with our five senses.”, summarizes Professor Harald Weinfurter (Ludwig-Maximilians-Universität (LMU) Munich and Max Planck Institute of Quantum Optics (MPQ), Garching) the results of recent measurements carried out by his team in order to test Bell’s inequality.

In their experiment the physicists produced entanglement between two atoms that were located 400 metres apart and determined their properties immediately after with high efficiency. The results of these measurements clearly contradict “local-realism” which is the fundament of classical physics.

In this world view properties of objects exist independent of being observed (realism), and no information or physical influence can propagate faster than the speed of light (locality). (Phys. Rev. Lett., 7 July 2017)

Local realism perfectly describes what we experience in our everyday life. However, the world of quantum particles is ruled by laws that are quite the opposite: two particles can be connected in a non-local way over large distances, and the property of a particle may be defined not until the instant it is being measured. In 1935 Albert Einstein, Boris Podolsky and Nathan Rosen emphasized these inconsistencies of quantum mechanics with local-realism in a foundational theoretical paper.

In 1964 the Irish physicist John Bell showed that a certain inequality can be used to test the validity of either world view experimentally. Quantum me-chanics can violate the inequality, whereas local realism is in agreement.

The test requires the entanglement of two quantum particles as well as the successive measurement of their properties. Though all experiments so far have confirmed the predictions of quantum mechanics, advocates of local realism still found loopholes for their classical interpretation.

In each lab, a single rubidium atom is caught in an optical trap and excited to emit a single photon. That way, the spin-state of the atom and the polarization state of the photon are being entangled. The photons are coupled into optical fibres and guided to a set-up where they are brought to interference.

“Our two observer stations are independently operated and are equipped with their own laser and control systems”, Dr. Wenjamin Rosenfeld, leader of the project, points out. “Because of the 400 metres distance between the laboratories, communication from one to the other would take 1328 nanoseconds, which is much more than the duration of the measurement process. So, no information on the measurement in one lab can be used in the other lab. That’s how we close the locality loophole.”

As a consequence, the spins of the two trapped rubidium atoms are expected to point into the same direction, or into the opposite direction, depending on the kind of entanglement. In a measurement run of eight days the scientists collected around 10 000 events. The analysis of the data showed, that far more atoms were in the same state (or in the opposite state respectively) than would be expected for a classical distribution.

In fact, a violation of Bell’s inequality of more than 6 standard deviations was obtained – much more than in similar experiments conducted in the Netherlands. “We were able to determine the spin-state of the atoms very fast and very efficiently. Thereby we closed a second potential loophole: the assumption, that the observed violation is caused by an incomplete sample of detected atom pairs”, says Wenjamin Rosenfeld.

On the one hand, the proof of the violation of Bell’s inequality in an experiment, which closes both locality and detection loophole, is of fundamental importance for our understanding of nature. On the other hand, the scientists envision the possibility to use the method for the safe encoding of messages. The application of the method to quantum cryptography would still require further improvement of the measurement quality. The system could also be used as a quantum repeater that would make it possible to transmit quantum information over long distances in an efficient way. Olivia Meyer-Streng