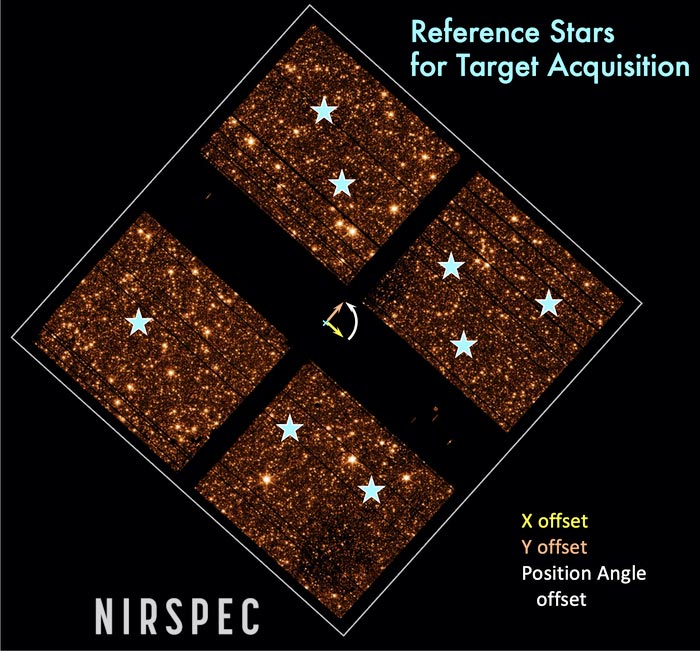 A simulation of the NIRSpec MSA-based Target acquisition process, demonstrated on the NIRSpec Sharpness Check Image. NIRSpec uses “Reference Stars” observed through the fixed slits in the central area and the MSA to carefully correct the small x – y and position angle (rotation) offsets of the observatory so that the science targets will be aligned properly with their shutters across the entire NIRSpec MOS field of view.
Credit: NASA, ESA, and the NIRSpec Team

The Webb team has now approved 10 out of 17 science instrument modes; since last week we added (14) MIRI imaging, (2) NIRCam wide-field slitless spectroscopy, and our final NIRISS mode, (10) single-object slitless spectroscopy. As we ramp down the final commissioning activities, some openings in the schedule have appeared. The team has started to take some of the first science data, getting it ready to release starting July 12, 2022, which will mark the official end of commissioning Webb and the start of routine science operations.

“The Near-Infrared Spectrograph (NIRSpec) is the instrument on the Webb telescope that observes spectra of astrophysical and planetary objects at near infrared wavelengths. The NIRSpec Grating Wheel Assembly (GWA) uses diffraction gratings or a prism to separate the wavelengths of incoming light into a spectrum. Study of the intensity or brightness of light across the wavelengths can provide key diagnostic information about the nature of various objects across the universe – from extrasolar planets around distant stars, to faint galaxies at the edge of the universe, and objects in our own solar system. NIRSpec will observe them all.”

“In addition to the gratings and a prism, the NIRSpec GWA also has a mirror that is primarily used to ‘acquire’ targets – to image them and place them at the proper locations in the instrument to observe a spectrum.  NIRSpec has two methods for target acquisition (TA): the Wide Aperture Target Acquisition (WATA) and the Micro-Shutter Assembly (MSA) -based Target Acquisition (MSATA).

“The WATA process takes an image of a single astrophysical target through the wide ‘S1600A1’ fixed slit to determine its position on the sky as seen through the instrument. The software on-board the Webb telescope autonomously calculates an offset to move the telescope and accurately position either this target or another nearby target at the optimal location in NIRSpec to spread the light into a spectrum. During instrument commissioning, the excellent performance of WATA has been demonstrated on the sky for all four of the NIRSpec observing modes: integral field unit imaging spectroscopy, fixed slit spectroscopy, bright object time series, and multi-object spectroscopy.

“NIRSpec includes the multi-object spectroscopy (MOS) mode, where spectra of dozens to hundreds of science targets will be observed at one time. This requires specialized apertures that can be configured by opening and closing specific tiny doorways (microshutters) of the 250,000 total that are arranged in a rectangular grid in the MSA, allowing individual targets to be observed with little contamination from nearby objects or background light.

“During MSATA, a set of target acquisition reference stars are imaged through open microshutters. The stellar positions are calculated autonomously by Webb’s on-board software and used to correct the initial spacecraft pointing and position angle (rotation). To allow accurate correction of the observed spectra for the centering of each source in its shutter, this process must place the MOS science targets across the full span of the NIRSpec field of view with an accuracy of 1/10th of a NIRSpec shutter width – or just 20 milli-arcseconds on the sky (the approximate size of a bumblebee, 1.5 cm, viewed from 150 km away!).

“The recent confirmation of NIRSpec target acquisition and additional work on the four science modes primes the NIRSpec team for our last activities of commissioning. We cannot wait to see the first NIRSpec science observations coming this summer!

“NIRSpec was built for the European Space Agency (ESA) by a consortium of European companies led by Airbus Defence and Space (ADS) with NASA’s Goddard Space Flight Center providing its detector and microshutter subsystems.”