Home / Physics and Astronomy / Light rays from a supernova bent by the curvature of space-time around a galaxy
21.04.2017 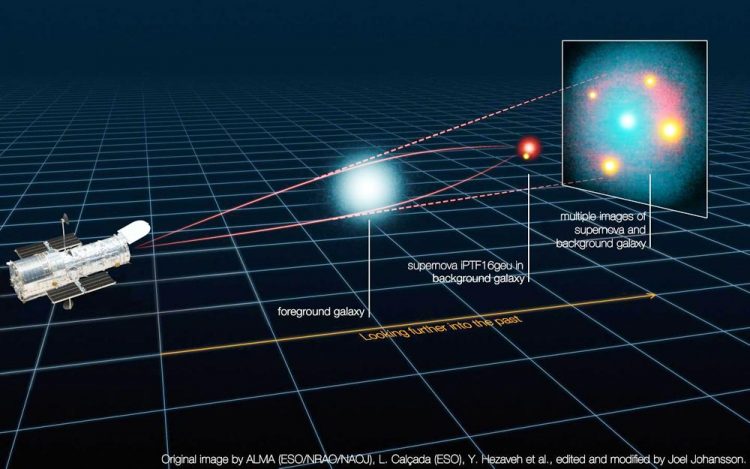 The light from the supernova iPTF16geu and of its host galaxy is warped and amplified by the curvature of space mass of a foreground galaxy. In the case of the point-like supernova, the light is split into four images. These have been resolved with the Hubble Space Telescope. Credit: Original image by ALMA (ESO/NRAO/NAOJ), L. Calçada (ESO), Y. Hezaveh et al, edited and modified by Joel Johansson

Type Ia supernovae, nature's own “standard candles”, have been used for many years by astronomers to measure cosmological distances. These studies led to the discovery of the accelerated expansion of the Universe, a sensational discovery that won the 2011 Nobel prize in Physics. Professor Ariel Goobar at the Department of Physics at Stockholm University was a member of the team led by one of the Nobel laureates, Saul Perlmutter.

An international team of physicists and astronomers led from Stockholm University has now seen, for the first time, the rare appearance of multiple images of the same exploding star dubbed iPTF16geu, which belongs to a class of supernovae known as Type Ia.

The phenomenon, called strong gravitational lensing is a result of the intense warping of the supernova light by an intervening galaxy positioned between us and the star in near perfect alignment. In this special case, the supernova appeared magnified, but also multiplied. The new observations provide a promising new tool to test key cosmological theories about the accelerating expansion of the universe and the distribution of a mysterious substance known as dark matter.

Type Ia supernovae are abundant and frequently used by astronomers to accurately measure distances in the universe. Gravitational lensing – the curving of space due to gravity – has also been observed many times since the early 20th century when it was predicted by Einstein. Yet, imaging a gravitationally lensed Type Ia supernova had proven formidably difficult, until now.

“Resolving, for the first time, multiple images of a strongly lensed “standard candle” supernova is a major breakthrough. We can measure the light focusing power of gravity more accurately than ever before, and probe physical scales that may have seemed out of reach until now,” says Ariel Goobar, Professor at Oskar Klein Centre, Stockholm University and a lead author of the study, published today in the journal Science.

Goobar and his group are partners in two Caltech-led international scientific collaborations– iPTF (intermediate Palomar Transient Factory) and GROWTH (Global Relay of Observatories Watching Transients Happen). The iPTF takes advantage of the Palomar Observatory and its unique capabilities to scan the skies and discover, in near real time, fast-changing cosmic events such as supernovae. GROWTH manages a global network of researchers and telescopes that can swiftly perform follow-up observations to study these transient events in detail.

Within two months of detection, the team observed iPTF16geu supernova with NASA/ESA Hubble Space Telescope, and the adaptive-optics instruments on the Keck Observatory atop Mauna Kea, Hawaii, and the VLT telescopes in Chile. Apart from producing a striking visual effect, capturing the image of the strongly lensed Type Ia supernova such as iPTF16geu is extremely useful scientifically. Astronomers can now measure very accurately how much time it takes for the light from each of the multiple images of the supernova to reach us. The difference in the time of arrival can then be used to estimate with a high precision the expansion rate of the universe known as the Hubble constant. Currently, the different methods to measure the Hubble constant produce slightly different results but even these small changes can result in significantly different scenarios for the predicted evolution and expansion of the universe.

The study of iPTF16geu is already delivering interesting results. Based on current knowledge of supernovae and gravitational lensing, observing an event such as iPTF16geu is rather improbable. Moreover, using data from Keck and Hubble the team finds that the lensing galaxy needs a great deal of substructure to account for the observed differences in the four supernova images, and the total lens magnification.

This may introduce new questions about the way matter clumps in the universe and challenge astronomers' understanding of gravitational lensing at small scales.

“The discovery of iPTF16geu is truly like finding a somewhat weird needle in a haystack. It reveals to us a bit more about the universe, but mostly triggers a wealth of new scientific questions. That's why I love science and astronomy” – says Rahman Amanullah, a postdoctoral fellow at Stockholm University and a co-author on the study.

The study, titled “iPTF16geu: A multiply-imaged gravitationally lensed Type Ia supernova” is published in the journal Science,. Eleven of the authors are researcher at Stockholm University.

The intermediate Palomar Transient Factory (iPTF) is based at the Palomar Observatory which is operated by the California Institute of Technology.

GROWTH is a partnership of 13 international academic institutions who jointly pursue science at the frontier of time-domain astronomy.