From dust to planet: how gas giants form 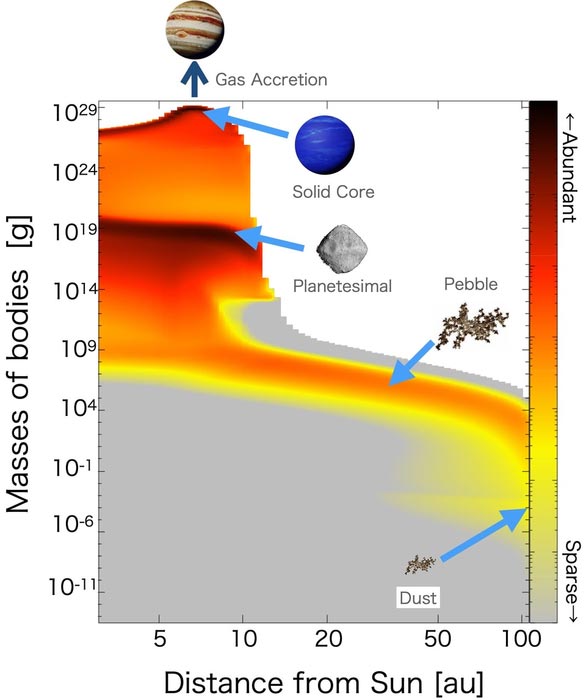 Result of dust-to-planet simulation: Mass distribution of bodies from dust to planets at about 200,000 years Credit: Hiroshi Kobayashi

Gas giants are made of a massive solid core surrounded by an even larger mass of helium and hydrogen. But even though these planets are quite common in the Universe, scientists still don’t fully understand how they form. Now, astrophysicists Hiroshi Kobayashi of Nagoya University and Hidekazu Tanaka of Tohoku University have developed computer simulations that simultaneously use multiple types of celestial matter to gain a more comprehensive understanding of how these colossal planets grow from tiny specks of dust. Their findings were published in The Astrophysical Journal.

“We already know quite a bit about how planets are made,” says Kobayashi. “Dust lying within the far-reaching ‘protoplanetary disks’ surrounding newly formed stars collides and coagulates to make celestial bodies called planetesimals. These then amass together to form planets. Despite everything we know, the formation of gas giants, like Jupiter and Saturn, has long baffled scientists.”

This is a problem, because gas giants play huge roles in the formation of potentially habitable planets within planetary systems.

For gas giants to form, they must first develop solid cores that have enough mass, about ten times that of Earth, to pull in the huge amounts of gas for which they are named. Scientists have long struggled to understand how these cores grow.  The problem is two-fold. First, core growth from the simple amassing of nearby planetesimals would take longer than the several million years during which the dust-containing protoplanetary disks survive. Second, forming planetary cores interact with the protoplanetary disk, causing them to migrate inward towards the central star. This makes conditions impossible for gas accumulation.

To tackle this problem, Kobayashi and Tanaka used state-of-the-art computer technologies to develop simulations that can model how dust lying within the protoplanetary disk can collide and grow to form the solid core necessary for gas accumulation. A major issue with current programs was that they could only simulate planetesimal or pebble collisions separately. “The new program is able to handle celestial bodies of all sizes and simulate their evolution via collisions,” explains Kobayashi.

The simulations showed that pebbles from the outer parts of the protoplanetary disk drift inwards to grow into icy planetesimals at about 10 astronomical units (au) from the central star. A single astronomical unit represents the mean distance between the Earth and the Sun. Jupiter and Saturn are about 5.2au and 9.5au away from the Sun, respectively. Pebble growth into icy planetesimals increases their numbers in the region of the developing planetary system that is about 6-9 au from the central star. This encourages high core growth rates, resulting in the formation of solid cores massive enough to accumulate gas and develop into gas giants in a period of about 200,000 years.

“We expect our research will help lead to the full elucidation of the origin of habitable planets, not only in the solar system, but also in other planetary systems around stars,” says Kobayashi.

The paper, “Rapid Formation of Gas-giant Planets via Collisional Coagulation from Dust Grains to Planetary Cores,” was published online in The Astrophysical Journal on November 17, 2021, at DOI: 10.3847/1538-4357/ac289c.