Firing up a new alloy 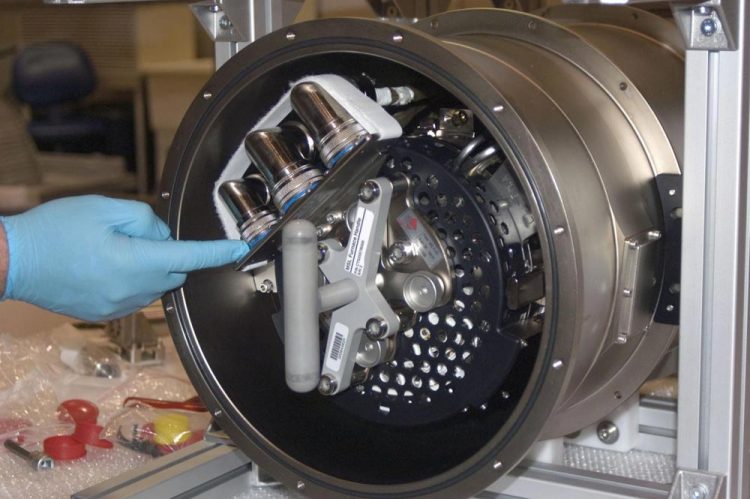 “In space the rules of sintering change,” said Rand German, principal investigator for the investigation titled NASA Sample Cartridge Assembly-Gravitational Effects on Distortion in Sintering (MSL SCA-GEDS-German). “The first time someone tries to do sintering in a different gravitational environment beyond Earth or even microgravity, they may be in for a surprise. There just aren't enough trials yet to tell us what the outcome could be. Ultimately we have to be empirical, give it a try, and see what happens.”

If the disparities between sintering on Earth and sintering in space can be better understood through continued experimentation, the technique could hold promise as an in-flight manufacturing solution or become a reliable path for piecing together in-situ resources.

Missions to Mars or the Moon could leverage this new knowledge of sintering to piece together habitats from the lunar or Martian soil, known as regolith. Regolith includes mixed sediment like loose rock, dust, and soil.

The sintering process is used on a wide variety of everyday items that require metal bonding from the metal parts of a watch to a set of braces or the hinges on eyeglasses. One familiar example of the process in action is the bonding that occurs when ceramics are fired in a kiln.

This experiment relies on sintering to study a new alloy's behavior in microgravity.

“After the 1940s, sintering really started to take off as a manufacturing process,” said German. “Once the automotive industry adopted it, the field saw phenomenal growth. Now we want to take sintering to space.”

Components for the investigation were delivered to the space station aboard SpaceX CRS-14 and were fired in the Material Science Laboratory Low Gradient Furnace (MSL-LGF) within Materials Science Research Rack One (MSRR-1).

The investigation uses a process known as liquid phase sintering to test the degree of distortion in sintering caused by microgravity. Slightly different from traditional sintering, liquid phase sintering introduces materials with a lower melting point to the mix to bond particles not otherwise easily sintered. The melted additive speeds up and improves the bonding process. The results may allow scientists to adjust future calculations to create more successful bonds in microgravity.

“Sintering happens at the atomic level,” said German. “Increased temperatures can cause those atoms to move about, and the liquid phase for our investigation helps with this atomic transport. On Earth, we have very stable structures where particles are pushed together by gravity, but we found in prior experiments that without gravity's compression, the components being sintered can distort tremendously.”

Initially scientists on German's team hoped to sinter a tungsten, nickel, and iron alloy, but the team had to get creative to accommodate a temperature of 1210 C – the maximum allowed for the station's Low Gradient Furnace. Their solution? Create a new alloy. While based on previous research on the melting points and sintering applications of manganese, the substance created for this investigation is a novel combination of tungsten, nickel, copper and manganese.

The alloy could even have uses for lower temperature sintering back on Earth, where this bonding process has revolutionized and expanded options for the additive manufacturing industry. While the effects of Earth's gravitational pull are well known and defined for sintering on the ground, the investigation's results could still allow for process improvements and new insights into distortion. Likewise, the new alloy developed by German's team could be useful for a variety of industrial applications.

This investigation was sponsored by the Space Life and Physical Sciences Research and Applications Division (SLPSRA) at NASA Headquarters in Washington.