Home / Physics and Astronomy / An exoplanet atmosphere as never seen before
25.11.2022 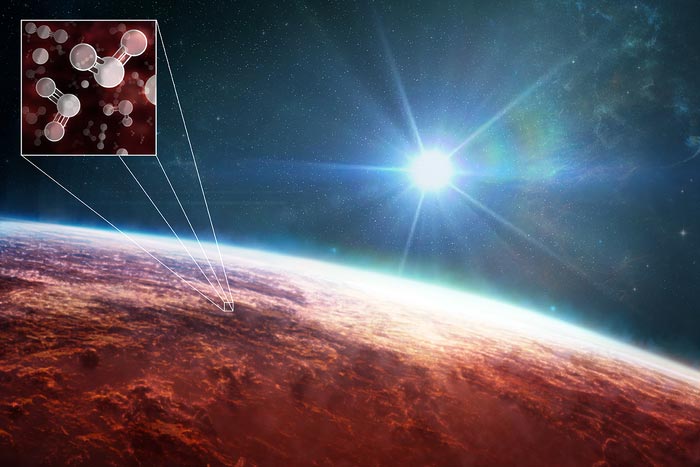 New observations of WASP-39b with the JWST have provided a clearer picture of the exoplanet, showing the presence of sodium, potassium, water, carbon dioxide, carbon monoxide and sulfur dioxide in the planet's atmosphere. This artist's illustration also displays newly detected patches of clouds scattered across the planet.
Credit: Melissa Weiss/Center for Astrophysics | Harvard & Smithsonian

The JWST just scored another first: a detailed molecular and chemical portrait of a distant world’s skies.

The telescope’s array of highly sensitive instruments was trained on the atmosphere of a “hot Saturn” — a planet about as massive as Saturn orbiting a star some 700 light-years away — known as WASP-39 b. While JWST and other space telescopes, including Hubble and Spitzer, previously have revealed isolated ingredients of this broiling planet’s atmosphere, the new readings provide a full menu of atoms, molecules, and even signs of active chemistry and clouds.

“The clarity of the signals from a number of different molecules in the data is remarkable,” says  Mercedes López-Morales, an astronomer at the Center for Astrophysics | Harvard & Smithsonian and one of the scientists who contributed to the new results.

“We had predicted that we were going to see many of those signals, but still, when I first saw the data, I was in awe,” López-Morales adds.

The latest data also give a hint of how these clouds in exoplanets might look up close: broken up rather than a single, uniform blanket over the planet.

The findings bode well for the capability of JWST to conduct the broad range of investigations on exoplanets — planets around other stars — scientists hoped for. That includes probing the atmospheres of smaller, rocky planets like those in the TRAPPIST-1 system.

“We observed the exoplanet with multiple instruments that, together, provide a broad swath of the infrared spectrum and a panoply of chemical fingerprints inaccessible until JWST,” said Natalie Batalha, an astronomer at the University of California, Santa Cruz, who contributed to and helped coordinate the new research. “Data like these are a game changer.”

The suite of discoveries is detailed in a set of five newly submitted scientific papers, available on the preprint website arXiv. Among the unprecedented revelations is the first detection in an exoplanet atmosphere of sulfur dioxide, a molecule produced from chemical reactions triggered by high-energy light from the planet’s parent star. On Earth, the protective ozone layer in the upper atmosphere is created in a similar way.

“The surprising detection of sulfur dioxide finally confirms that photochemistry shapes the climate of ‘hot Saturns,’” says Diana Powell, a NASA Hubble fellow, astronomer at the Center for Astrophysics and core member of the team that made the sulfur dioxide discovery. “Earth’s climate is also shaped by photochemistry, so our planet has more in common with ‘hot Saturns’ than we previously knew!”

Jea Adams a graduate student at Harvard and researcher at the Center for Astrophysics analyzed the data that confirmed the sulfur dioxide signal.

“As an early career researcher in the field of exoplanet atmospheres, it’s so exciting to be a part of a detection like this,” Adams says. “The process of analyzing this data felt magical. We saw hints of this feature in early data, but this higher precision instrument revealed the signature of SO2 clearly and helped us solve the puzzle.”

At an estimated temperature of 1,600 degrees Fahrenheit and an atmosphere made mostly of hydrogen, WASP-39 b is not believed to be habitable. The exoplanet has been compared to both Saturn and Jupiter, with a mass similar to Saturn, but an overall size as big as Jupiter. But the new work points the way to finding evidence of potential life on a habitable planet.

The planet’s proximity to its host star – eight times closer than Mercury is to our Sun – also makes it a laboratory for studying the effects of radiation from host stars on exoplanets. Better knowledge of the star-planet connection should bring a deeper understanding of how these processes create the diversity of planets observed in the galaxy.

Other atmospheric constituents detected by JWST include sodium, potassium, and water vapor, confirming previous space and ground-based telescope observations as well as finding additional water features, at longer wavelengths, that haven’t been seen before.

JWST also saw carbon dioxide at higher resolution, providing twice as much data as reported from its previous observations. Meanwhile, carbon monoxide was detected, but obvious signatures of both methane and hydrogen sulfide were absent from the data. If present, these molecules occur at very low levels, a significant finding for scientists making inventories of exoplanet chemistry in order to better understand the formation and development of these distant worlds.

Capturing such a broad spectrum of WASP-39 b’s atmosphere was a scientific tour de force, as an international team numbering in the hundreds independently analyzed data from four of JWST’s finely calibrated instrument modes. They then made detailed inter-comparisons of their findings, yielding yet more scientifically nuanced results.

JWST views the universe in infrared light, on the red end of the light spectrum beyond what human eyes can see; that allows the telescope to pick up chemical fingerprints that can’t be detected in visible light.

Each of the three instruments even has some version of the “IR” of infrared in its name: NIRSpec, NIRCam, and NIRISS.

To see light from WASP-39 b, JWST tracked the planet as it passed in front of its star, allowing some of the star’s light to filter through the planet’s atmosphere. Different types of chemicals in the atmosphere absorb different colors of the starlight spectrum, so the colors that are missing tell astronomers which molecules are present.

By so precisely parsing an exoplanet atmosphere, the JWST instruments performed well beyond scientists’ expectations — and promise a new phase of exploration among the broad variety of exoplanets in the galaxy.

López-Morales says, “I am looking forward to seeing what we find in the atmospheres of small, terrestrial planets.”