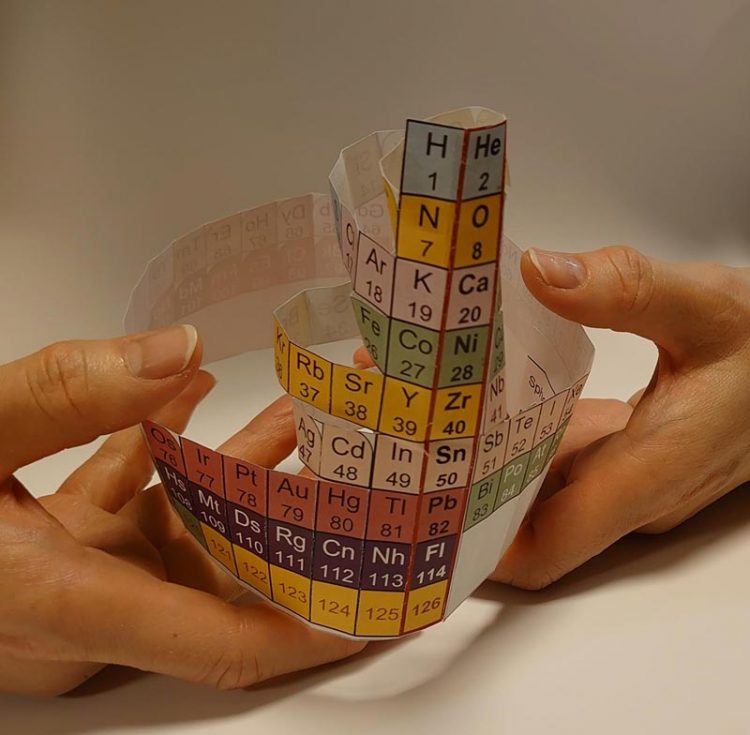 Protons have different stable magic numbers: 2, 8, 20, 28, and so on. When nuclear orbits are filled with protons, they form stable nuclei, analogous to the noble-gas elements Credit: Kyoto University/Yoshiteru Maeno/Kouichi Hagino

A staple in every science classroom is the periodic table of elements, and for many it is their first introduction to the vast mysteries of the natural world.

“The periodic table of the elements is one of the most significant achievements in science, and in its familiar form it is based on the shell structure of electron orbitals in atoms,” explains Yoshiteru Maeno, one of the co-developers of the new table.

“But atoms are comprised of two types of charged particles that designate each element: electrons orbiting the core and protons in the core itself.”

The team's new 'Nucletouch' table — also available as a 3D model — was announced recently in the journal Foundations of Chemistry.

Over 150 years have passed since Dmitri Mendeleev discovered the periodic law that lead him to propose the classic periodic table. He even had the foresight to add space for elements that were still unknown in his time.

“Fundamentally, it comes down to the electrons in each atom. Atoms are considered to be stable when electrons completely fill their 'shell' of orbits around the nucleus,” continues Maeno.

“So-called 'noble gases', inert elements such as helium, neon, and argon, rarely react with other elements. Their most stable electron numbers are 2, 10, 18, 36, and so on.”

Maeno decribes these as atomic 'magic numbers', and importantly the same principle can also be applied to protons. Imagining that protons in a nucleus exist in 'orbits' may seem like a stretch, but the discovery of the concept was awarded the 1963 Nobel prize in physics.

Protons have different stable magic numbers: 2, 8, 20, 28, and so on. Among these are familiar elements such at helium, oxygen, and calcium. The Nucletouch table places these 'magic nuclei' at its center, providing a new perspective on the elements.

“Similar to electrons, when nuclear orbits are filled with protons, they form stable nuclei, analogous to the noble-gas elements,” says collaborator Kouichi Hagino.

“In our nuclear periodic table, we also see that nuclei tend to be spherically-shaped near the magic numbers, but deformed as you move away from them.”

The team made the table to highlight alternative ways to illustrate the laws of nature, and hopes that enthusiasts and academics alike will find something to enjoy and learn from this fresh new look at an old friend.

Kyoto University is one of Japan and Asia's premier research institutions, founded in 1897 and responsible for producing numerous Nobel laureates and winners of other prestigious international prizes. A broad curriculum across the arts and sciences at both undergraduate and graduate levels is complemented by numerous research centers, as well as facilities and offices around Japan and the world.