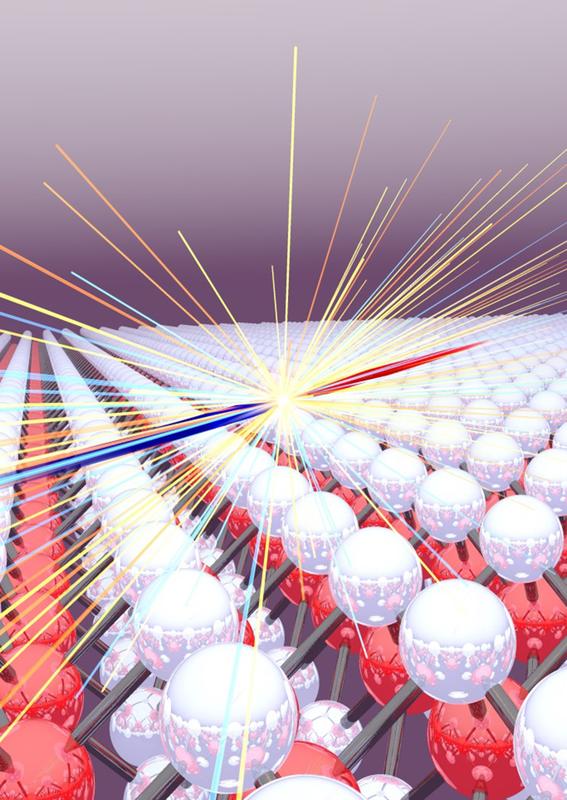 Electron (blue) and hole (red) are collided within a tungsten diselenide crystal (lattice at the bottom). The energy gained is released in high-energy photons (brightly coloured rays). Fabian Langer

Our standard model of the smallest bits of matter rests upon evidence gathered from particle accelerators and collider experiments. A team of physicists from Regensburg (Germany), Marburg (Germany), and Santa Barbara (USA) have now realized a collider for particles in solids. This fundamentally new concept will be reported in the upcoming issue of Nature.

Already little children tend to smash all sorts of things together to learn about their interactions and properties. Particle colliders apply this natural idea to study the building blocks of matter. In the early 1900’s, Ernest Rutherford shot  α-particles onto gold foils and concluded from their scattering properties that atoms contain their mass in a very small nucleus. A hundred years later, the greatest collaboration in modern science smashed protons into each other in the pursuit and discovery of the Higgs boson.

Such an elemental collider concept is absent in solid-state research, although our modern technology crucially depends on knowing the structural and electronic properties of solids. In a crystal, the complex interaction of the billions upon billions of particles boils down to simple entities, so-called quasiparticles. However, it is extremely difficult to single out specific quasiparticles among a large ensemble of them.

A team of physicists from Germany and the US have now succeeded in smashing such elementary excitations of a solid into each other. Since the quasiparticles only exist for a flash of time, it was crucial to operate on ultrashort timescales. If one second was compared to the age of the universe, a quasiparticle would exist only for a few hours.

The scientists used a unique laser source (terahertz high-field lab, Regensburg) to produce hard evidence on collisions within excitons, which are pairs of electrons and holes (electron vacancies) bound by the attractive Coulomb-force between them, in a thin crystal of tungsten diselenide. A femtosecond optical pulse (1 femtosecond equals a millionth of a billionth of a second) creates excitons at a precise time with respect to an intense light pulse in the terahertz spectral regime (1 terahertz means one trillion oscillations per second).

The lightwave of the terahertz pulse accelerates the constituents of the exciton, i.e. electrons and holes, within a period shorter than a single oscillation of light. The experiment shows that only excitons created at the right time lead to electron–hole collisions, just as in conventional synchrotron accelerators. This re-collision generates ultrashort light bursts encoding key aspects of the solid. The observations in the laboratory are supported and explained by a quantum mechanical simulation carried out by physicists from the University of Marburg.

These time-resolved collision experiments in a solid prove that basic collider concepts can be utilized to transfer versatile methods from particle physics to solid-state research and shed new light on quasiparticles and many-body excitations in condensed matter systems. Ultimately, this approach might lead to the clarification of some of the most outstanding enigmas of condensed matter physics such as the binding mechanism of Cooper pairs in high temperature superconductors.