Light that Moves and Molds Gels 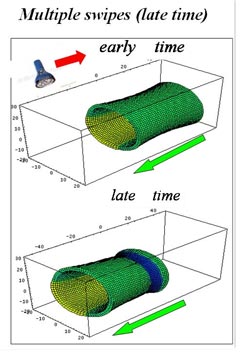 Using the light to move the gel.<br>

Some animals—like the octopus and cuttlefish—transform their shape based on environment, fending off attackers or threats in the wild. For decades, researchers have worked toward mimicking similar biological responses in non-living organisms, as it would have significant implications in the medical arena.

Now, researchers at the University of Pittsburgh have demonstrated such a biomimetic response using hydrogels—a material that constitutes most contact lenses and microfluidic or fluid-controlled technologies. Their study, published in Advanced Functional Materials, is the first to show that these gels can be both reconfigured and controlled by light, undergoing self-sustained motion—a uniquely biomimetic behavior.

“Imagine an apartment with a particular arrangement of rooms all in one location,” said lead author Anna Balazs, Pitt Distinguished Professor of Chemical and Petroleum Engineering in the Swanson School of Engineering. “Now, consider the possibility of being able to shine a particular configuration of lights on this structure and thereby completely changing not only the entire layout, but also the location of the apartment. This is what we’ve demonstrated with hydrogels.”

Together with Olga Kuksenok, research associate professor in the Swanson School, Balazs experimented with a newer type of hydrogel containing spirobenzopyran molecules. Such materials had been previously shown to form distinct 2-D patterns on initially flat surfaces when introduced to varying displays of light and are hydrophilic (“liking” water) in the dark but become hydrophobic (“disliking” water) under blue light illumination. Therefore, Balazs and Kuksenok anticipated that light could be a useful stimulus for tailoring the gel’s shape.

Using computer modeling, the Pitt team demonstrated that the gels “ran away” when exposed to the light, exhibiting direct, sustained motion. The team also factored in heat—combining the light and local variations in temperature to further control the samples’ motions. Controlling a material with light and temperature could be applicable, Balazs said, in terms of regulating the movement of a microscopic “conveyor belt” or “elevator” in a microfluidic device.

“This theoretical modeling points toward a new way of configuring the gels into any shape, while simultaneously driving the gels to move due to the presence of light,” said Kuksenok.

“Consider, for example, that you could take one sheet of hydrogel and, with the appropriate use of light, fashion it into a lens-shaped object, which could be used in optical applications”, added Balazs.

The team also demonstrated that the gels could undergo dynamic reconfiguration, meaning that, with a different combination of lights, the gel could be used for another purpose. Reconfigurable systems are particularly useful because they are reusable, leading to a significant reduction in cost.

“You don’t need to construct a new device for every new application,” said Balazs. “By swiping light over the system in different directions, you can further control the movements of a system, further regulating the flow of materials.”

Balazs said this type of dynamic reconfiguration in response to external cues is particularly advantageous in the realm of functional materials. Such processes, she said, would have a dramatic effect on manufacturing and sustainability, since the same sample could be used and reused for multiple applications.

The team will now study the effect of embedding microscopic fibers into the gel to further control the shape and response of the material to other stimuli.

The paper, “Modeling the Photoinduced Reconfiguration and Directed Motion of Polymer Gels,” was first published online July 31. Funding for this study was provided by the U.S. Department of Energy.

Click here to see Balazs give a web seminar about these reconfigurable gels.
http://www.newton.ac.uk/programmes/CFM/seminars/2013062714454.html