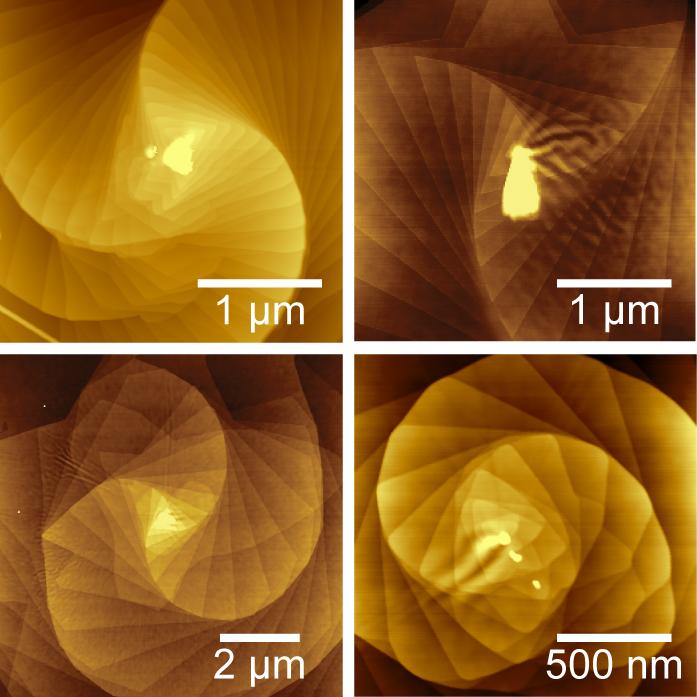 This microscopic, twisting spiral -- which exhibits interesting, tunable superconductive properties -- was "grown" by depositing sheets of two-dimensional material over a substrate curved slightly by slipping a nanoparticle underneath.
Credit: Image courtesy of Song Jin Lab

Scientists at the University of Wisconsin-Madison have discovered a way to control the growth of twisting, microscopic spirals of materials just one atom thick.

The continuously twisting stacks of two-dimensional materials built by a team led by UW-Madison chemistry Professor Song Jin create new properties that scientists can exploit to study quantum physics on the nanoscale. The researchers published their work today in the journal Science.

“This is the current frontier of 2D material research. In the last few years, scientists have realized that when you make a small twist between atomic layers — usually a few degrees — you create very interesting physical properties, such as unconventional superconductivity. For example, the twisted material loses its electrical resistance completely at the low temperature,” says Jin. “Researchers consider these 2D-quantum materials, and call such work ‘twistronics.'”

Yuzhou Zhao, a graduate student and first author of the study, says the standard practice for making twisting two-dimensional structures has been mechanically stacking two sheets of the thin materials on top of each other and carefully controlling the twist angle between them by hand. But when researchers grow these 2D materials directly, they cannot control the twist angle because the interactions between the layers are very weak.

“Imagine making a stack of continuously twisting playing cards. If you have nimble fingers, you could twist the cards, but our challenge is how to make the atomic layers twist in a controllable way by themselves at the nanoscale,” Jin says.

Jin’s team found out how to control these twisting nanoscale structures’ growth by thinking outside the flat space of Euclidean geometry.

Euclidean geometry forms the mathematic basis of the world we are familiar with. It allows us to think about the world in flat planes, straight lines and right angles. In contrast, non-Euclidean geometry describes curved spaces in which lines are curved and the sum of the angles in a square is not 360 degrees. Scientific theories that explain the space-time continuum, like Einstein’s general relativity, use non-Euclidean geometry as bedrock. Thinking about crystal structures outside Euclidean geometry, Jin says, opens up intriguing new possibilities.

Zhao and Jin created twisted spirals by taking advantage of a type of imperfection in growing crystals called screw dislocations. Jin has studied such dislocation-driven crystal growth for years and had used it to explain, for example, the growth of nanowire trees. In 2D materials, the dislocations provide a step up for following layers of the structure as it spirals like a parking ramp with all layers throughout the stack connected, aligning the orientation of every layer.

Then, in order to grow a non-Euclidean spiral structure and make the spirals twist, Jin’s team changed the foundation their spirals grew from. Instead of growing crystals on a flat plane, Zhao placed a nanoparticle, like a particle of silicon oxide, under the spiral’s center. During the growth process, the particle disrupts the flat surface and creates a curved foundation for the 2D crystal to grow on.

What the team found is that instead of an aligned spiral where the edge of each layer lies parallel to the previous layer, the 2D crystal forms a continuously twisting, multilayer spiral that twists predictably from one layer to the next. The angle of the interlayer twist arises from a mismatch between the flat (Euclidean) 2D crystals and the curved (non-Euclidean) surfaces they grow on.

Zhao calls the pattern in which the spiral structure grows directly over the nanoparticle, creating a cone-shaped base, a “fastened spiral.” When the structure grows over an off-center nanoparticle, like a house built on the side of a mountain, it’s an “unfastened spiral” pattern. Zhao developed a simple mathematic model to predict the twist angles of spirals, based on the geometric shape of the curved surface, and his modelled spiral shapes match well with the grown structures.

After the initial discovery, UW-Madison material science and engineering professor Paul Voyles and his student Chenyu Zhang studied the spirals under an electron microscope to confirm the alignment of the atoms in these twisted spirals. Their images showed that atoms in neighboring twisted layers form an expected overlapping interference pattern called a moiré pattern, which also gives fine layered silk clothing its sheen and ripple. Emeritus chemistry professor John Wright and his lab conducted preliminary studies suggesting the potential for unusual optical properties of the twisting spirals.

The researchers used transition metal dichalcogenides as the layers for the twisting spirals, but the concept doesn’t depend on specific materials, as long as they are 2D materials.

“We now can follow a rational model rooted in mathematics to create a stack of these 2D layers with a controllable twist angle between every layer, and they’re continuous,” Zhao says.

Direct synthesis of twisting 2D materials will enable the studies of novel quantum physics in these 2D “twistronic” materials, which Jin and his collaborators are pursuing in earnest.

“When you see everything matches perfectly with a simple math model and you think, ‘Wow, this is really working out,’ that kind of joy is why we work on research — that ‘eureka’ moment that you realize you’re now learning something nobody else has understood before,” Jin says.