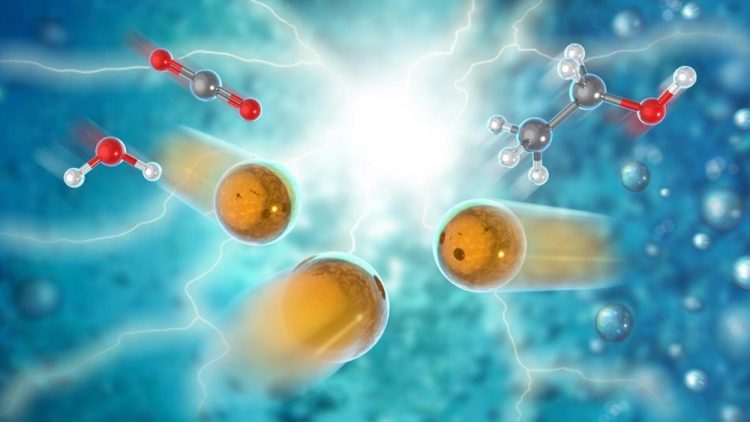 Artistic rendering of electrocatalytic process for conversion of carbon dioxide and water into ethanol. Image by Argonne National Laboratory

A research team, led by the U.S. Department of Energy's (DOE) Argonne National Laboratory in collaboration with Northern Illinois University, has discovered a new electrocatalyst that converts carbon dioxide (CO2) and water into ethanol with very high energy efficiency, high selectivity for the desired final product and low cost.

Ethanol is a particularly desirable commodity because it is an ingredient in nearly all U.S. gasoline and is widely used as an intermediate product in the chemical, pharmaceutical and cosmetics industries.

“The process resulting from our catalyst would contribute to the circular carbon economy, which entails the reuse of carbon dioxide.” — Di-Jia Liu, senior chemist in Argonne's Chemical Sciences and Engineering division and a UChicago CASE scientist

“The process resulting from our catalyst would contribute to the circular carbon economy, which entails the reuse of carbon dioxide,” said Di-Jia Liu, senior chemist in Argonne's Chemical Sciences and Engineering division and a UChicago CASE scientist in the Pritzker School of Molecular Engineering, University of Chicago.

This process would do so by electrochemically converting the CO2 emitted from industrial processes, such as fossil fuel power plants or alcohol fermentation plants, into valuable commodities at reasonable cost.

The team's catalyst consists of atomically dispersed copper on a carbon-powder support. By an electrochemical reaction, this catalyst breaks down CO2 and water molecules and selectively reassembles the broken molecules into ethanol under an external electric field.

The electrocatalytic selectivity, or “Faradaic efficiency,” of the process is over 90 percent, much higher than any other reported process. What is more, the catalyst operates stably over extended operation at low voltage.

“With this research, we've discovered a new catalytic mechanism for converting carbon dioxide and water into ethanol,” said Tao Xu, a professor in physical chemistry and nanotechnology from Northern Illinois University. “The mechanism should also provide a foundation for development of highly efficient electrocatalysts for carbon dioxide conversion to a vast array of value-added chemicals.”

Because CO2 is a stable molecule, transforming it into a different molecule is normally energy intensive and costly. However, according to Liu, “We could couple the electrochemical process of CO2-to-ethanol conversion using our catalyst to the electric grid and take advantage of the low-cost electricity available from renewable sources like solar and wind during off-peak hours.” Because the process runs at low temperature and pressure, it can start and stop rapidly in response to the intermittent supply of the renewable electricity.

“Thanks to the high photon flux of the X-ray beams at the APS, we have captured the structural changes of the catalyst during the electrochemical reaction,'' said Tao Li, an assistant professor in the Department of Chemistry and Biochemistry at Northern Illinois University and an assistant scientist in Argonne's X-ray Science division.

These data along with high-resolution electron microscopy at CNM and computational modeling using the LCRC revealed a reversible transformation from atomically dispersed copper to clusters of three copper atoms each on application of a low voltage. The CO2-to-ethanol catalysis occurs on these tiny copper clusters. This finding is shedding light on ways to further improve the catalyst through rational design.

“We have prepared several new catalysts using this approach and found that they are all highly efficient in converting CO2 to other hydrocarbons,” said Liu. “We plan to continue this research in collaboration with industry to advance this promising technology.”

About Argonne's Center for Nanoscale Materials

The Center for Nanoscale Materials is one of the five DOE Nanoscale Science Research Centers, premier national user facilities for interdisciplinary research at the nanoscale supported by the DOE Office of Science. Together the NSRCs comprise a suite of complementary facilities that provide researchers with state-of-the-art capabilities to fabricate, process, characterize and model nanoscale materials, and constitute the largest infrastructure investment of the National Nanotechnology Initiative. The NSRCs are located at DOE's Argonne, Brookhaven, Lawrence Berkeley, Oak Ridge, Sandia and Los Alamos National Laboratories. For more information about the DOE NSRCs, please visit https://science.osti.gov/User-Facilities/User-Facilities-at-a-Glance.

About the Advanced Photon Source

The U. S. Department of Energy Office of Science's Advanced Photon Source (APS) at Argonne National Laboratory is one of the world's most productive X-ray light source facilities. The APS provides high-brightness X-ray beams to a diverse community of researchers in materials science, chemistry, condensed matter physics, the life and environmental sciences, and applied research. These X-rays are ideally suited for explorations of materials and biological structures; elemental distribution; chemical, magnetic, electronic states; and a wide range of technologically important engineering systems from batteries to fuel injector sprays, all of which are the foundations of our nation's economic, technological, and physical well-being. Each year, more than 5,000 researchers use the APS to produce over 2,000 publications detailing impactful discoveries, and solve more vital biological protein structures than users of any other X-ray light source research facility. APS scientists and engineers innovate technology that is at the heart of advancing accelerator and light-source operations. This includes the insertion devices that produce extreme-brightness X-rays prized by researchers, lenses that focus the X-rays down to a few nanometers, instrumentation that maximizes the way the X-rays interact with samples being studied, and software that gathers and manages the massive quantity of data resulting from discovery research at the APS.