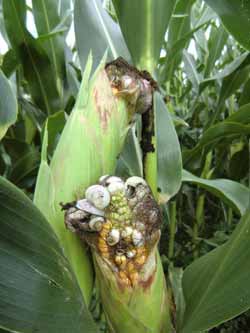 The parasitic fungus Ustilago maydis inhabits a corn cob – this combination is also served in Mexico as a delicacy with tortillas. Photo: Ronny Kellner<br>

Two-timing is nothing out of the ordinary for them: for about 100 million years, grass smut fungi have been breeding in a three-gender system. This was discovered by Dr. Ronny Kellner and Prof. Dr. Dominik Begerow of the RUB Geobotany Laboratory in cooperation with colleagues from the Heinrich Heine Universität in Düsseldorf.

Using genetic analysis, they showed that the structure of the responsible regions in the genome has hardly changed since then. In the journal PLoS Genetics, the team also reports that the fungi in the experiment not only mate within their own species, but also form hybrids with other species – and that after millions of years of separate evolution. “If you look at the time periods, it is almost as if mice could mate with humans” Begerow illustrates.

Grass smut fungi live as parasites on plants such as corn, wheat, and grasses and cause various plant diseases. For the study, the researchers tested 100 species, which they partly gathered themselves in Ecuador, Mexico, or Germany. For all the species they decoded the area of the genome that contains the genes for pheromone receptors. These make it possible to distinguish one’s own species from others. “What makes the work special is the successful synthesis of biodiversity research and functional genetics, which was made possible by the collaboration with Prof. Michael Feldbrügge and with Dr. Evelyn Vollmeister of the University in Düsseldorf” says Kellner.

How genes change over 100 million years

The researchers analysed ten species especially thoroughly using complex sequencing technologies. Instead of the usual 1,000 DNA building blocks (base pairs), they sequenced 20,000 base pairs. “In this way, we were able to gain entirely new insights” explained Begerow. “Although the actual gene structure has changed little in the last 100 million years, within the structure, the genetic information has changed dramatically. That should really mean that different species can no longer mate with each other”.

Mixing with other species

Nevertheless, in the experiment the team proved that grass smut fungi of different species can mate. Now they want to investigate whether this phenomenon also occurs in nature. “This is a fascinating discovery”, says Kellner. “The hybrid formation would have far-reaching ecological consequences.” A new species of fungus could, for example, be more harmful than its two predecessor species because it infests several different host plants. Leaps to new hosts would also be conceivable. “It’s like in the current debate surrounding the bird flu virus, which could combine with another strain of the virus” explained Begerow. “Here, new ‘super parasites’ could emerge whose properties are completely unpredictable. If different species of fungi did actually mate, that would speed up evolution enormously.”