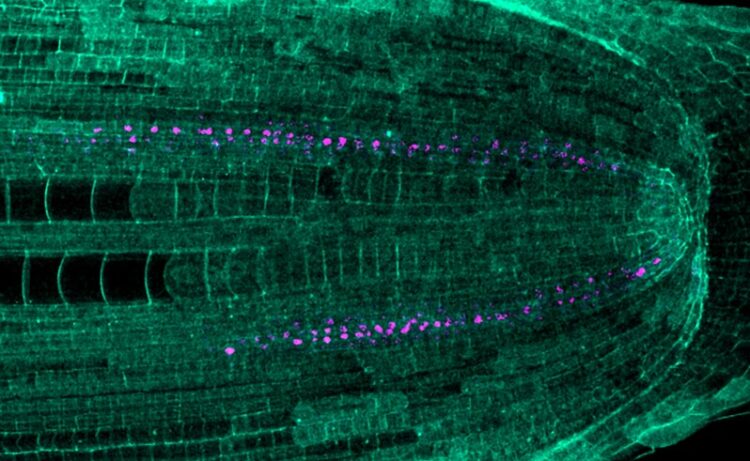 Median section of a corn root showing the expression of the SHR gene in its unusual "jumping off" point in the middle layer of cells called the endodermis. From this point, SHR communicates with outer layers to generate multiple layers of cortex, which have known roles in symbiosis and drought and flooding stress.
Credit: Carlos Ortiz-Ramírez

A single-cell map of corn’s root reveals a regulator of cellular diversity.

A new study uses novel single-cell profiling techniques to reveal how plants add new cell layers that help them resist climate stressors like drought or flooding. The research focuses on corn—a critically important crop around the world—in an effort to create a cell-by-cell map of the plant’s root system, which mediates drought stress and absorbs nutrients and fertilizer from the soil.

“We discovered how corn expands its cortex tissue, which makes up much of the crop’s root system. Adding layers to the cortex tissue is a key evolutionary feature that generates ways for plants to tolerate drought and flooding and improve nutrient uptake,” said Kenneth Birnbaum, a professor in New York University’s Department of Biology and Center for Genomics and Systems Biology and the senior author of the paper, which appears in the journal Science.

“These traits will be critical targets to allow plants to withstand global warming and reduce the carbon footprint of crops,” added Birnbaum, whose lab at NYU led the project in collaboration with researchers at Cold Spring Harbor Laboratory and the University of Pennsylvania.

They next mapped the cells back to their location in the corn root, akin to assembling a 10,000-piece jigsaw puzzle without a guide. To solve the puzzle, the researchers used fluorescent dyes that penetrated into root tissues at variable depths to label and isolate different layers, like separating the layers of an onion, giving them gene landmarks to map the single cells.

“This second layer of information essentially gave us the puzzle box that allowed us to precisely map cells to their appropriate location in order to recreate a 3D model of gene expression throughout the entire corn root,” said Carlos Ortiz Ramirez of the NYU Center for Genomics and Systems Biology and UGA Laboratorio Nacional de Genómica para la Biodiversidad in Mexico, who was the first author of the study.

The new map of the corn root revealed previously undescribed cellular specialization in the cortex of the root. The cortex is particularly important because it comprises the bulk of the early corn root and has more than 10 layers. In addition, the cortex cellular subtypes are of critical importance for traits that help crop plants cope with environmental stressors. For example, the inner cortex layer is where symbiotic fungi exchange nutrients with the plant, and increased cooperation could help lessen the carbon footprint of agriculture. Middle layers of cortex create air tunnels that enable gas exchange during flooding, while on-demand expansion of the cortex can reduce water loss during drought stress.

“Using our 3D model of the corn root, we mapped out four distinct cortex layer signatures that could provide important genetic targets for further improvement in symbiosis, flooding, and drought,” said Ortiz Ramirez.

Furthermore, the group found clues within the new map of the root about how corn could generate the extra layers of cortex. In particular, the key gene regulator known as SHORT ROOT (SHR), whose function is similar across different plants, was in an intriguing position that was different from other plants with just one layer of cortex.

In Arabidopsis, a small flowering plant commonly used as a model organism in plant biology, SHR was one of the first transcription factors shown to move from cell to cell, allowing inner cell types to give instructions to middle layers to create a new tissue. That makes SHR a type of local organizer, directing root tissues to assemble around a core pattern. However, in corn, the single-cell map revealed that SHR was in a new position right next to the multiple layers of cortex, a convenient “jumping off” point to expand the multiple cortex layers. Indeed, the researchers tracked SHR protein movement and found that it was hypermobile, moving not just one layer but multiple layers through the cortex.

Moreover, mutations that disturbed SHR function in both corn and the corn relative foxtail millet had a severely reduced number of cortex layers. This demonstrates how SHR kept its primary role in expanding tissue layers and generating new cell identities but switched its location to add new cell types that ultimately allow corn to cope with environmental stresses.

“Identifying SHR has a key regulator of cortex expansion is an important first step,” said Birnbaum. “Moving forward, tweaking these regulators could provide tools to alter the number of cortex layers or subtypes that could enhance their ability to withstand climate stressors like drought, or improve nitrogen uptake, allowing plants to use less fertilizer or grow in nutrient-poor soil.”