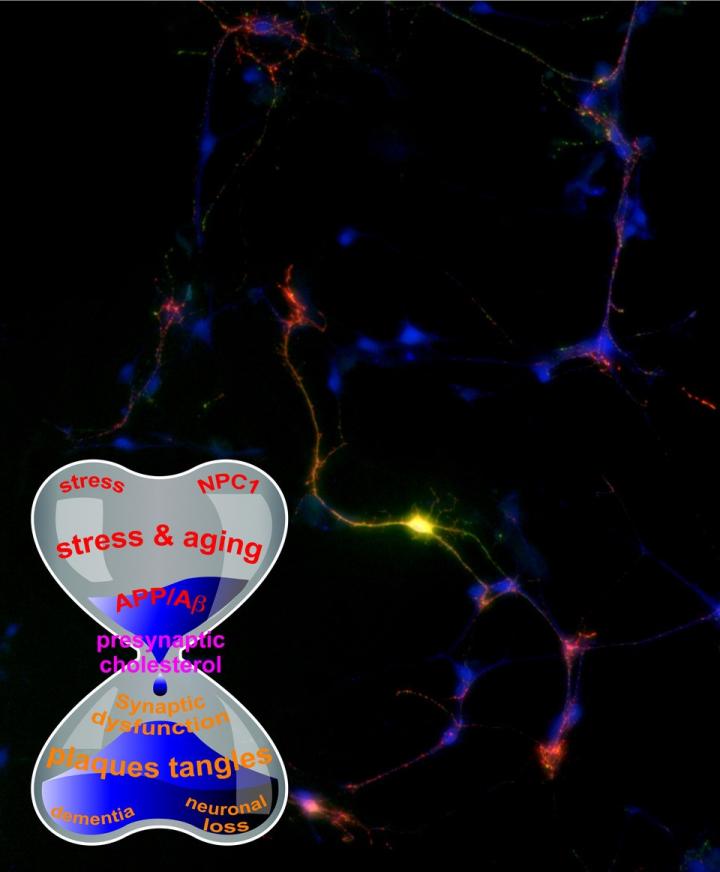 The background is an image of neurons (blue). Some of them express the new amyloid precursor protein reporter (green) and a synapse-marker, Synaptophysin-pHTomato (red). The rendering at the lower left corner illustrates the Alzheimer's disease etiology model derived from the study, in which a variety of pathological contributors like aging and Abeta converge on presynaptic cholesterol and the disruption of cholesterol homeostasis diverges to various pathological outcomes like synaptic dysfunction and neuronal loss. Credit: Qi Zhang, Ph.D. and Claire E. DelBove

It has been more than 100 years since Alois Alzheimer, M.D., a German psychiatrist and neuropathologist, first reported the presence of senile plaques in an Alzheimer's disease patient brain. It led to the discovery of amyloid precursor protein that produces deposits or plaques of amyloid fragments in the brain, the suspected culprit of Alzheimer's disease.

A team of neuroscientists led by Florida Atlantic University's Brain Institute sought to answer a fundamental question in their quest to combat Alzheimer's disease — “Is amyloid precursor protein the mastermind behind Alzheimer's disease or is it just an accomplice?”

Mutations found in amyloid precursor protein have been linked to rare cases of familial Alzheimer's disease. Although scientists have gained a lot knowledge about how this protein turns into amyloid plaques, little is known about its native function in neurons.

In the case of more common sporadic Alzheimer's disease, the highest genetic risk factor is a protein that is involved in cholesterol transportation and not this amyloid precursor protein. Moreover, various clinical trials designed to address Alzheimer's disease by minimizing amyloid plaque formation have failed, including one from Biogen announced last month.

In a study published in the journal Neurobiology of Disease, Qi Zhang, Ph.D., senior author, an investigator at the FAU Brain Institute, and an assistant research professor in FAU's Schmidt College of Medicine, along with collaborators from Vanderbilt University, tackle this Alzheimer's disease mystery by devising a multi-functional reporter for amyloid precursor protein and tracking the protein's localization and mobility using quantitative imaging with unprecedented accuracy.

For the study, Zhang and collaborators genetically disrupted the interaction between cholesterol and amyloid precursor protein. Surprisingly, by disengaging the two, they discovered that this manipulation not only disrupts the trafficking of amyloid precursor protein but also messes up cholesterol distribution at the neuronal surface. Neurons with an altered distribution of cholesterol exhibited swollen synapses and fragmented axons and other early signs of neurodegeneration.

“Our study is intriguing because we noticed a peculiar association between amyloid precursor protein and cholesterol that resides in the cell membrane of synapses, which are points of contact among neurons and the biological basis for learning and memory,” said Zhang. “Amyloid precursor protein may just be one of the many accomplices partially contributing to cholesterol deficiency. Strangely, the heart and brain seem to meet again in the fight against bad cholesterol.”

Given the broad involvement of cholesterol in almost all aspects of neurons' life, Zhang and collaborators have proposed a new theory about the amyloid precursor protein connection in Alzheimer's disease, especially in the surface of those tiny synapses, which triggers neurodegeneration.

“Although still in early stages, this cutting-edge research by Dr. Zhang and his collaborators at Vanderbilt University may have implications for the millions of people at risk for or suffering with Alzheimer's disease,” said Randy D. Blakely, Ph.D., executive director of the FAU Brain Institute and a professor of biomedical science in FAU's Schmidt College of Medicine. “The number of people in Florida alone who are age 65 and older with Alzheimer's disease is expected to increase 41.2 percent by 2025 to a projected 720,000, highlighting the urgency of finding a medical breakthrough.”

According to the Alzheimer's Association, Florida is number one in per capita cases of Alzheimer's disease in the U.S.

About the FAU Brain Institute:

Inaugurated in 2016 on the John D. MacArthur Campus in Jupiter, Fla., the FAU Brain Institute, supports research, education and community outreach among more than 100 faculty level researchers at FAU and its affiliate research centers. One of FAU's four pillars that guide the University's goals and strategic actions, the Institute seeks to unlock the secrets of brain development, function and plasticity and how the mechanisms uncovered can be compromised to drive devastating brain disorders. From the study of neuronal development and signaling to investigations of brain diseases including addiction, autism, Parkinson's and Alzheimer's disease, researchers from FAU's Brain Institute seek to generate knowledge that benefits society. For more information about the Institute and its members, visit http://www.ibrain.fau.edu.

Florida Atlantic University, established in 1961, officially opened its doors in 1964 as the fifth public university in Florida. Today, the University, with an annual economic impact of $6.3 billion, serves more than 30,000 undergraduate and graduate students at sites throughout its six-county service region in southeast Florida. FAU's world-class teaching and research faculty serves students through 10 colleges: the Dorothy F. Schmidt College of Arts and Letters, the College of Business, the College for Design and Social Inquiry, the College of Education, the College of Engineering and Computer Science, the Graduate College, the Harriet L. Wilkes Honors College, the Charles E. Schmidt College of Medicine, the Christine E. Lynn College of Nursing and the Charles E. Schmidt College of Science. FAU is ranked as a High Research Activity institution by the Carnegie Foundation for the Advancement of Teaching. The University is placing special focus on the rapid development of critical areas that form the basis of its strategic plan: Healthy aging, biotech, coastal and marine issues, neuroscience, regenerative medicine, informatics, lifespan and the environment. These areas provide opportunities for faculty and students to build upon FAU's existing strengths in research and scholarship.