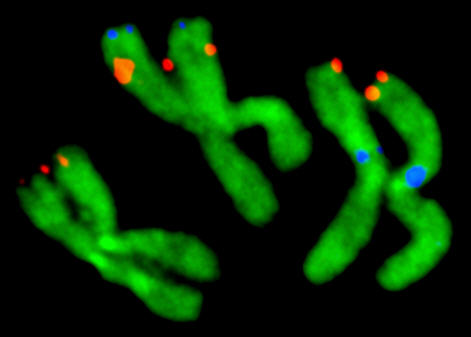 The red and blue signals indicate positions of interest for researchers on the chromosomes of the mosquito Aedes aegypti, the principal carrier of dengue and yellow fevers. Courtesy of Maria Sharakhova.

With the map, researchers can compare the chromosome organization and evolution between this mosquito and the major carrier of malaria, the Anopheles gambiae mosquito, to find ways to prevent diseases.

“Despite looking somewhat similar, these mosquitoes diverged from each other about 150 million years ago. So, they are genetically further apart than humans and elephants,” said Maria Sharakhova, a research scientist in the College of Agriculture and Life Sciences, a Fralin Life Science Institute affiliate, and the principal investigator of the study published in BMC Biology and highlighted on Biome.

The researchers say that the genome of the malaria mosquito is clearly separated into gene-rich and gene-poor compartments, while the genome of the yellow fever mosquito has no such differentiation. The study supports the observation that sex determination is also handled differently in the two mosquito species which could be useful in devising prevention measures.

In the malaria mosquito, X and Y chromosomes determine sex, but in the yellow fever mosquito, sex in males is determined just by a small location on chromosome 1.

Despite these differences, sex chromosome X in the malaria mosquito and chromosome 1 in the yellow fever mosquito evolve much faster than other chromosomes, meaning that the sex-determining segment of chromosome 1 may influence the rate of the change.

The discovery is significant because only female mosquitoes bite and transmit infectious diseases. Understanding the mechanisms of the sex chromosomes may help to manipulate the sex ratio in mosquitoes and reduce disease transmission.

“The development of novel approaches to disease control will be definitely more successful if we better understand the differences and similarities in the genomes ofthe yellow fever and malaria vectors,” Sharakhova said.

Although the genome of the yellow fever mosquito was published in 2007, the lack of a detailed physical genome map prevented researchers from analyzing the chromosome genetic composition and evolution. The large size of the yellow fever mosquito’s genome — about one third of the human genome size and five times larger than the malaria mosquito’s genome — complicated genomic mapping efforts.

“The physical genome map developed in this study will guide efforts to significantly improve the genome assembly for the yellow fever mosquito and will facilitate more advanced studies of the genome organization and chromosome evolution in mosquitoes,” said Igor Sharakhov, an associate professor of entomology in the College of Agriculture and Life Sciences, a Fralin Life Science Institute affiliate, and co-author on the paper.

Other study authors include Vladimir A. Timoshevskiy, a postdoctoral research associate in entomology in the College of Agriculture and Life Sciences; Nicholas Kinney of Leesburg, Virginia, a graduate student in the genetics, bioinformatics, and computational biology program at Virginia Tech; Zhijian Tu, a professor of biochemistry in the College of Agriculture and Life Sciences; Chunhong Mao, a senior project associate at the Virginia Bioinformatics Institute; David W. Severson, a professor of biological sciences at Eck Institute for Global Health of the University of Notre Dame, and Becky S. deBryun, a technician in the Severson laboratory.

A premiere Research Institute of Virginia Tech, the Fralin Life Science Institute enables and enhances collaborative efforts in research, education, and outreach within the Virginia Tech life science community through strategic investments that are often allied with colleges, departments, and other institutes.