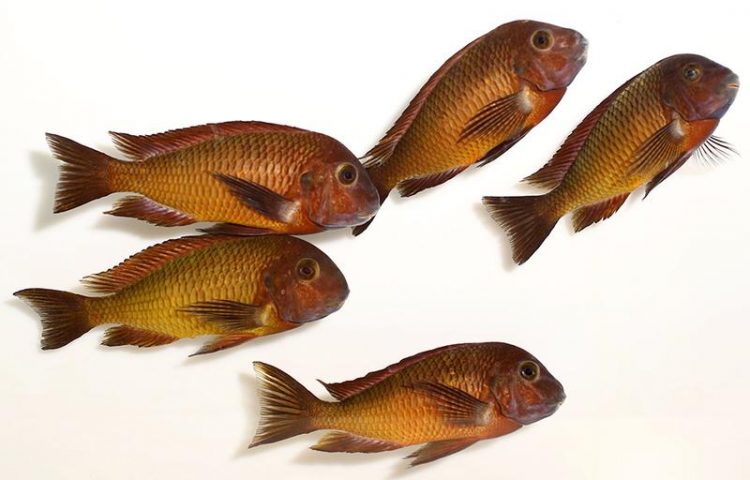 Yellow Tropheus of the population Ilangi, which has developed as a result of hybridisation between red and blue fish in Lake Tanganyika www.pisces.at/Wolfgang Gessl

“It very rarely happens in nature that a new phenotype, that developed as a result of cross-breeding, continues to persist over many generations”, says Univ.-Prof. Dr. Kristina Sefc from the Institute of Zoology at the University of Graz who is also the first author of this recent publication.

“A hybrid population with its own distinctive traits can only survive if there is no further hybridisation with the parent line.”

It is possible, yet very rare, that this is achieved by mate choice, i.e. only specimens of the same phenotype are recognised as mating partners. More often, the new population differs from its predecessors in ecological terms and colonizes a new habitat, for example, because it prefers a more arid environment.

In addition, environmental changes that create natural barriers may also contribute to physical separation. The latter is described by the Graz scientists in their “Shifting Barriers Model” now published for the first time.

This model, which can be applied to all sorts of different organisms, is the result of research on the red, blue and yellow Tropheus populations in Lake Tanganyika. The investigated populations inhabit the rocky sections of the lake shore. The yellow ones can only be found along an approximately 30 kilometre long stretch limited at both ends by sandy sections, one of these being the estuary of the wide Lufubu River.

The fish are highly specialised in reference to their habitat. Sand, for example, is a physical barrier that prevents them from meeting their red and blue conspecifics populating other lake shore sections. Otherwise they would mate, as was indeed demonstrated in laboratory experiments.

But how did the hybridisation come about? “As a result of environmental fluctuations, the positions of barriers separating the different fish populations along the coastline have changed so that the red and blue species came into contact, while the resulting hybrids were immediately physically separated from the parent lineages”, explains Sefc. Roughly 100 000 years ago, the water level was 400 metres lower, and the lake shore looked entirely different.

At that time, the Lufubu was not the barrier it is today. “The new phenotype probably appeared at that time”, the researchers presume. This assumption is in line with the fact that several different populations have in turn formed among the yellow cichlids. This indicates that the hybridisation must have happened a very long time ago.

In their analyses, the zoologists were supported by their colleagues from the Institute of Chemistry at the University of Graz.