Study Methods, Strains of Pfiesteria Are Both Critical in Determining Organism’s Toxicity 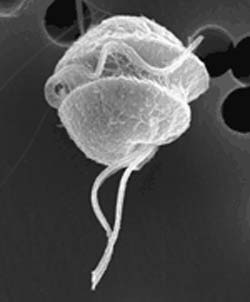 Flagellated sexual cell of one of the two known toxic Pfiesteria species, Pfiesteria shumwayae, that were included in the study. Photo by M. Parrow, Center for Applied Aquatic Ecology.

To gauge the toxicity of Pfiesteria, the important single-celled fish predator that was the culprit behind a number of fish kills and fish diseases along the East Coast in the 1990s, researchers need to both use the proper study methods and recognize that certain populations of the organism, called strains, are toxic while others are not.

That’s the main result of a wide-ranging study by Dr. JoAnn M. Burkholder, professor and director of the Center for Applied Aquatic Ecology at North Carolina State University, along with a dozen colleagues from several universities and research institutions, and a federal laboratory specializing in marine toxins. The research is published online in Proceedings of the National Academy of Sciences.

The study reaffirmed that some strains of the two known Pfiesteria species are toxic, including a strain used by other researchers who had asserted that Pfiesteria can’t make toxin. Burkholder and her colleagues found that toxic Pfiesteria strains can produce toxin in the absence of bacteria or other contaminating microbes, and that small amounts of Pfiesteria can kill fish with toxin. They also showed that toxin from Pfiesteria can cause fish disease and death without Pfiesteria cells having to be present: water that at one time contained Pfiesteria, but was then completely filtered to remove all of the toxic Pfiesteria cells, caused lesions in fish.

Other experiments showed that purified Pfiesteria toxin residue added to cultures of larval fish killed the fish, while control fish without exposure to the toxin remained healthy.

In the study, two basic methods of detecting Pfiesteria toxicity were compared: fish microassays (FMAs) using larval fish, and standardized fish bioassays (SFBs) using juvenile fish. In each method, the scientists tested toxic Pfiesteria strains, known to be toxic from toxin detection tests that were completed by the National Oceanic and Atmospheric Administration’s National Ocean Service in Charleston, S.C. The researchers compared the results from the known toxic strains to tests of a strain of Pfiesteria previously reported as nontoxic, and with controls that included both Pfiesteria strains which did not express toxicity and a related nontoxic, single-celled organism similar to Pfiesteria.

FMAs had been proposed by other scientists as useful tests for ruling out the presence of toxic Pfiesteria – if fish don’t die when exposed to water filtered from a Pfiesteria culture, they asserted, then toxic Pfiesteria doesn’t exist. But lack of fish death does not necessarily mean Pfiesteria’s toxin isn’t there. “Unless the water was tested to see if Pfiesteria toxin was present, all that can be said from such a study is that there wasn’t enough toxin present to cause the fish to die,” explained Dr. Andrew Gordon, second author of the paper and a scientist at Old Dominion University. “More sensitive tests for the chemical toxin itself would be needed to say for sure whether toxin was or wasn’t present.”

Burkholder offered this analogy: “If a person drinks a glass of water from a well that sometimes contains arsenic, and the person doesn’t suddenly become very sick or die, would it be correct to say that the water didn’t contain any arsenic? Surely not – such a test wouldn’t be sensitive enough to detect levels of arsenic that were too low to cause sudden illness or death, but still were present, and still harmful. A test to detect arsenic would be needed.”

SFBs were better able to reliably detect actively toxic Pfiesteria than FMAs, Burkholder says, since SFBs were not developed to distinguish between toxicity and physical attack as factors in fish death, but instead designed to detect toxic Pfiesteria strains, which are known to routinely prey upon fish. “SFBs detected actively toxic strains. Those strains were verified as toxic by also actually testing for chemical toxin that they produced,” said Dr. Alan J. Lewitus, a scientist at the University of South Carolina, Georgetown and a co-author of the paper. “Toxin detection tests like the procedures developed by the National Ocean Service should be done along with fish assays to determine whether a toxic strain is present.”

The researchers also wanted to test whether Pfiesteria can produce toxin without help from bacteria and – as is known for other toxic algae – whether bacteria enhance Pfiesteria’s toxicity. Burkholder and her colleagues found that some strains of Pfiesteria were able to make toxin on their own, without bacteria. “However, when bacteria were present, Pfiesteria made more toxin,” noted Dr. Harold Marshall, a scientist at Old Dominion University and a co-author of the paper, “and a lot more toxin was produced when the toxic strains were given live fish.”

The study showed that conclusions about whether a species of algae is toxic should be based on tests of many strains, rather than one or a few, using culture conditions that encourage toxin production. “It’s also important to keep in mind that Pfiesteria changes when it’s cultured, after years of separation from its natural habitat,” Burkholder added. “Many toxic strains of Pfiesteria, like other toxic algae, even lose their ability to keep making toxin, so young cultures should be used as much as possible. This study clearly shows that Pfiesteria has benign strains and toxic strains, just like other toxic algae – it is the norm, not the exception. Research designed in recognition of that fact will make real progress in advancing scientific understanding about Pfiesteria.”