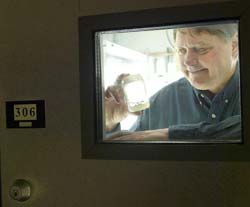 Simple sugars apparently are the biological signals needed to maintain the steel-like strength of plant cell walls, according to Purdue University scientists.

“This is a really fundamental discovery in the mechanics of plant growth that eventually could have several practical applications,” said Nick Carpita, a botany and plant pathology professor. “These could include controlling crop plant size and shape, improving desirable textural properties of fruits and vegetables, and enhancing nutritional fibers in plant cell walls without changing other plant structural factors.”

Before these goals can be accomplished, however, the scientists must learn as much as possible about how plant cell walls are created and evolve, he said.

Plant cell walls are composites of minute plant fibers interlaced with many different chains of simple sugars, or polymers, that make the structure strong, Carpita said. While studying how cell walls change as plants develop, his research team discovered that an enzyme requires a simple milk sugar, called galactose, to relace polymers during growth.

The scientists report their findings in the January issue of the journal Plant Physiology.

“A plant cell is essentially concentric rings or spools of cellulose, so when the cells expand, the microfibrils of the wall spread apart,” Carpita said. “New microfibrils, or minute organic plant fibers, that are synthesized during growth are continually integrated from the inner rings into the outer rings.

“This process prevents the thickness of the wall from changing even as the cell increases 100 or 1,000 times its length.”

The galactose needed to ensure wall strength during plant cell growth is attached to some long polymers, he said. However, abnormal plants, or mutants, that are missing the simple sugars lose cell wall tensile strength.

Xyloglucan, a sugar polymer that has several molecules of simple sugars, ties the spools of cellulose together, he said. An enzyme called xyloglucan endo-transglucosylase, or XET, breaks the tether during cell growth to allow the microfibrils to separate. However, XET hangs onto one end of the broken polymer so when a new cellulose fibril forms to fill the space, the enzyme brings old and new xyloglucans together to relace the cellulose to maintain tensile strength. This process not only allows the cell wall to grow, but also is the way growth is finally halted.

“When the plant cells grow, there is a mechanism to loosen the cell walls of the interlacing molecules so the sugar can push those microfibrils apart,” Carpita said. “The thickness isn’t compromised because new cellulose microfibrils fill the gap. Unless the xyloglucans are retied or reassociated around the new configurations of microfibrils, the cells will continue to expand indefinitely.”

Using the common research plant Arabidopsis, the researchers looked at mutants and found some that developed abnormally. The mutants the scientists studied had an area at the base of the embryonic plant stems, called the hypocotyls, that bulged.

“We isolated the enzyme, isolated the individual polymers, and showed that their activity was severely compromised if the simple sugar galactose was missing from the xyloglucan,” Carpita said. “In the plant, the consequence is that the tensile strength of the cell walls is less than half of normal.

“They are really flimsy cells and they bulge out. Instead of being really nice and columnar as this tissue usually is, they get a little flabby. We deduced that these galactose appendages are required for XET to recognize where to clip the xyloglucans to allow expansion and then to retie them.”

The scientists want to find out how to control cell wall formation by determining the function of all the genes in their formation, development and growth. This may allow them to improve many everyday products from food to chairs.

The other researchers involved in this study are Maria Peña, currently of Complex Carbohydrate Research Center, University of Georgia; and Peter Ryden and Andrew C. Smith, of the Institute of Food Research, Norwich Research Park, Colney, England; and Michael Madson, Lafayette, Ind.