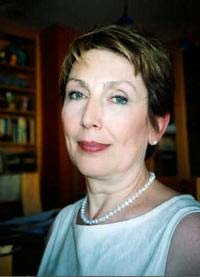 Natasha Raikhel, Distinguished Professor of Plant Cell Biology at UC Riverside, reports in the Proceedings of the National Academy of Sciences the mechanisms plants use to process and degrade proteins. (Photo credit: N. Raikhel.)

In plants, many proteins are degraded or activated within the vacuole, a large water and nutrient-filled vesicle found in plant cells that helps maintain the shape of plant cells and that stores food molecules. The manner by which this degradation or activation occurs, however, is uncertain.

In the June 10, 2003, issue of the Proceedings of the National Academy of Sciences (PNAS), however, scientists from UC Riverside identify a key protein, vacuolar processing enzyme or VPEg, in Arabidopsis thaliana (thale cress) that is required for this process.

“Plants that do not have VPEg fail to accumulate the active form of an important vacuolar enzyme and fail to degrade a variety of proteins that would not normally accumulate to high levels within vacuoles, particularly those of older tissues,” said Natasha Raikhel, Distinguished Professor of Plant Cell Biology at UC Riverside and the principal investigator of the research project.

The findings, which would interest researchers studying changes that occur within plants during the aging process as well as those studying the role of vacuoles in plants, indicate that VPEg is likely involved in a variety processes that range from proper development during aging to stress and defense responses.

This is an important discovery because it demonstrates a previously unknown mechanism through which plants control protein composition of the vacuole. “Plants cannot live without vacuoles,” explained Raikhel. “Since the vacuole plays such a central role in a wide variety of physiological processes, the VPEg pathway for protein processing and degradation may have a large impact on many of these processes.”

The research, funded by the National Science Foundation, was performed from 2001-2003 in the UC Riverside Department of Botany and Plant Sciences and the Center for Plant Cell Biology (CEPCEB). Besides Raikhel, the co-authors of the PNAS paper are Enrique Rojo, Jan Zouhar, Clay Carter and Valentina Kovaleva, all of whom are researchers in Raikhel’s laboratory.