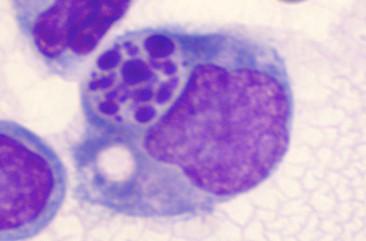 If dead cells accumulate in the body, they can contribute to inflammation and pre-dispose individuals to multiple chronic inflammatory conditions such as rheumatoid arthritis, cardiovascular diseases, Crohn's disease or lupus by uncharacterized pathways.

“Billions of cells die daily as a consequence of regular wear and tear, tissue turnover and during an inflammatory response. The body dedicates a significant amount of energy in the specific recognition and uptake of these dead cells via specific pathways,” said Juhi Bagaitkar, Ph.D., a researcher in the University of Louisville School of Dentistry's Department of Oral Immunology and Infectious Diseases.

“If you don't bury the dead cells, they can burst open and cause harm, however the underlying mechanisms are incompletely characterized.”

Bagaitkar, along with researchers at Washington University, Indiana University and University of Michigan, recently published a paper in blood, demonstrating the importance of oxidants in the digestion of apoptotic, or dead cells.

Specifically, the research uncovers how NADPH-oxidase is activated to generate reactive oxygen species (ROS) in macrophages, a kind of white blood cell that eats dead cells. These cells also are involved in getting rid of viruses and bacteria.

The presence of ROS is critical as its generation drives additional mechanisms involved in the digestion of cellular corpses to perform at an optimal level. This allows the macrophage to complete the digestion process of efferocytosis, meaning “to bury the dead”.

“Independent of their role in microbial killing, we are gaining even greater appreciation of ROS for their huge role in the regulation of host immune response,” Bagaitkar said. “Uncovering this role of ROS in the clearance of dead cells sheds some mechanistic insights on how oxidants function in limiting of host inflammation rather than activating it.

“When our bodies produce too much or too little ROS we become pre-disposed to autoimmune disease and chronic inflammation. Producing just enough – the optimal level — is what's needed,” she said.