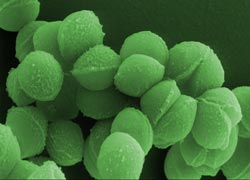 Streptococcus pyogenes is one of the bacteria in which the HZI scientists have studied the CRISPR-Cas system. © HZI / Rohde<br>

Viruses cannot only cause illnesses in humans, they also infect bacteria. Those protect themselves with a kind of ‘immune system’ which – simply put – consists of specific sequences in the genetic material of the bacteria and a suitable enzyme.

It detects foreign DNA, which may originate from a virus, cuts it up and thus makes the invaders harmless. Scientists from the Helmholtz Centre for Infection Research (HZI) in Braunschweig have now shown that the dual-RNA guided enzyme Cas9 which is involved in the process has developed independently in various strains of bacteria.

This enhances the potential of exploiting the bacterial immune system for genome engineering.

Even though it has only been discovered in recent years the immune system with the cryptic name ‘CRISPR-Cas’ has been attracting attention of geneticists and biotechnologists as it is a promising tool for genetic engineering. CRISPR is short for Clustered Regularly Interspaced Palindromic Repeats, whereas Cas simply stands for the CRISPR-associated protein. Throughout evolution, this molecule has developed independently in numerous strains of bacteria. This is now shown by Prof Emmanuelle Charpentier and her colleagues at the Helmholtz Centre for Infection Research (HZI) who published their finding in the international open access journal Nucleic Acids Research.

The CRISPR-Cas-system is not only valuable for bacteria but also for working in the laboratory. It detects a specific sequence of letters in the genetic code and cuts the DNA at this point. Thus, scientists can either remove or add genes at the interface. By this, for instance, plants can be cultivated which are resistant against vermins or fungi. Existing technologies doing the same thing are often expensive, time consuming or less accurate. In contrast to them the new method is faster, more precise and cheaper, as fewer components are needed and it can target longer gene sequences.

Additionally, this makes the system more flexible, as small changes allow the technology to adapt to different applications. “The CRISPR-Cas-system is a very powerful tool for genetic engineering,“ says Emmanuelle Charpentier, who came to the HZI from Umeå and was awarded with the renowned Humboldt Professorship in 2013. “We have analysed and compared the enzyme Cas9 and the dual-tracrRNAs-crRNAs that guide this enzyme site-specifically to the DNA in various strains of bacteria.” Their findings allow them to classify the Cas9 proteins originating from different bacteria into groups. Within those the CRISPR-Cas systems are exchangeable which is not possible between different groups.

This allows for new ways of using the technology in the laboratory: The enzymes can be combined and thereby a variety of changes in the target-DNA can be made at once. Thus, a new therapy for genetic disorders caused by different mutations in the DNA of the patient could be on the horizon. Furthermore, the method could be used to fight the AIDS virus HIV which uses a receptor of the human immune cells to infect them. Using CRISPR-Cas, the gene for the receptor could be removed and the patients could become immune to the virus. However, it is still a long way until this aim will be reached.

Still those examples show the huge potential of the CRISPR-Cas technology. “Some of my colleagues already compare it to the PCR,” says Charpentier. This method, developed in the 1980s, allows scientists to ‘copy’ nucleic acids and therefore to manifold small amounts of DNA to such an extent that they can be analysed biochemically. Without this ground-breaking technology a lot of experiments we consider to be routine would have never been possible.

Charpentier was not looking for new molecular methods in the first place. “Originally, we were looking for new targets for antibiotics. But we found something completely different,” says Charpentier. This is not rare in science. In fact some of the most significant scientific discoveries have been made incidentally or accidentally.

The department “Regulation in Infection Biology” studies how the expression of bacterial RNA and bacterial proteins is controlled. Both factors contribute to the establishment and the course of an infection.

The Helmholtz Centre for Infection Research (HZI)
Scientists at the Helmholtz Centre for Infection Research in Braunschweig, Germany, are engaged in the study of different mechanisms of infection and of the body’s response to infection. Helping to improve the scientific community’s understanding of a given bacterium’s or virus’ pathogenicity is key to developing effective new treatments and vaccines.