Path to the brown coloration of diatoms discovered 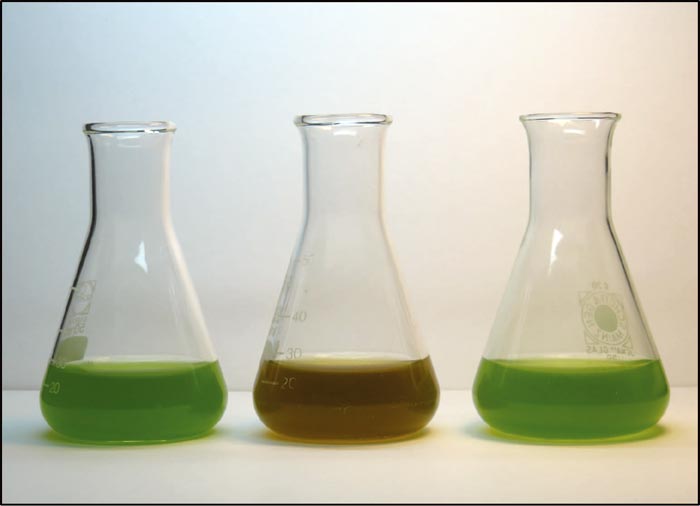 The brown color of diatoms is caused by the carotenoid fucoxanthin that absorbs green light and transfers the energy to chlorophylls for photosynthesis. The two newly engineered diatom mutants with impaired fucoxanthin biosynthesis are green-colored.
Photo/©: Martin Lohr

Diatoms are microscopic unicellular algae occurring in natural waters worldwide. During photosynthesis, they take up large quantities of carbon dioxide, the primary greenhouse gas emitted through human activities, and convert it into biomass. The carotenoid fucoxanthin enables diatoms to efficiently harvest the blue-green part of the sunlight for photosynthesis. In collaboration with an international research team, researchers of Johannes Gutenberg University Mainz (JGU) in Germany now discovered how the algae produce this important and widely used pigment. Their work has recently been published in a scientific paper in Proceedings of the National Academy of Sciences (PNAS).

New insights into the synthesis of fucoxanthin

Thriving in both marine and freshwater environments all around the world, diatoms are the most species-rich algal group and have been estimated to account for up to one-fifth of the global photosynthetic carbon dioxide fixation. Contrary to the photosynthetically active green leaves of land plants, diatoms are brown-colored. Their distinct coloration is caused by the light-harvesting carotenoid fucoxanthin that enables the efficient absorption and photosynthetic utilization of the blue-green light prevailing in many aquatic habitats. Fucoxanthin is one of the most abundant carotenoids on earth and a major driver of marine photosynthesis. During the last decade, fucoxanthin has also become a subject of rising interest for nutraceutical and pharmaceutical applications. First mentioned in the scientific literature already 150 years ago as a major pigment in brown algae, the chemical structure of fucoxanthin was established in the 1960s. So far, however, it was not known how algae synthesize this important natural product.

The research groups of Dr. Martin Lohr at Johannes Gutenberg University Mainz (JGU), Professor Graham Peers at Colorado State University in Fort Collins, USA, and Professor Xiaobo Li at Westlake University in Hangzhou in China now have unveiled the biosynthetic pathway of fucoxanthin in diatoms, reported in a joint manuscript published in PNAS. Using the CRISPR/Cas9 genetic scissors, the researchers impaired genes in the diatom Phaeodactylum tricornutum that encode proteins with high similarity to enzymes involved in carotenoid biosynthesis in land plants. The knockout of two of these candidate enzymes resulted in green-colored mutants that were devoid of fucoxanthin, but had accumulated other carotenoids instead and had a strongly diminished photosynthetic efficiency. The detailed biochemical characterization of the novel carotenoids and of the enzymes that were knocked out in the mutants enabled the researchers to propose the complete path to fucoxanthin in diatoms.

Synthesis via a complex pathway with previously unknown intermediates

The pathway turned out to be substantially more complex than anticipated and encompasses three novel carotenoid intermediates. Based on bioinformatic analyses of the newly discovered enzymes and their distribution among algae, the researchers were also able to show that the fucoxanthin pathway evolved by duplication of ancient genes for enzymes catalyzing the formation of photoprotective carotenoids. As the authors explain, carotenoids in photosynthetic organism initially served as protectants under excess light. Their recent work shows that diatoms repeatedly duplicated components of the enzymatic toolbox that generates these photoprotective pigments. Some of the copies gained novel functions, thus enabling the synthesis of more complex carotenoids that turned out to be particularly well suited for photosynthetic light harvesting. Notably, the evolutionary younger brown algae are missing these additional enzymes and the novel carotenoid intermediates. Instead, they appear to use a modified pathway that evolved by shortening the pathway in diatoms.

A transfer of the complete fucoxanthin biosynthetic pathway into other organisms is not yet possible. “We have identified all pathway intermediates, but some of the enzymes involved are still unknown,” said Dr. Martin Lohr of JGU’s Institute of Molecular Physiology (IMP). The authors expect, however, that their findings will foster the identification of the yet missing enzymes. Moreover, the green diatom mutants will provide unprecedented research opportunities for a deeper understanding of the biogenesis and regulation of the photosynthetic apparatus in this prominent algal group of particular ecological importance.