Long-term memory in the cortex 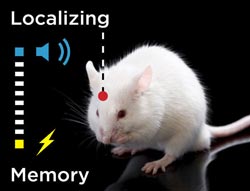 Memories (red) for associating two different sensations are formed in the cortex (tone in blue and touch in yellow). © MPI f. Medical Research/Splettstoesser<br>

‘Where’ and ‘how’ memories are encoded in a nervous system is one of the most challenging questions in biological research. The formation and recall of associative memories is essential for an independent life.

The hippocampus has long been considered a centre in the brain for the long-term storage of spatial associations. Now, Mazahir T. Hasan at the Max Planck Institute for Medical Research and José Maria Delgado-Garcìa at the University Pablo de Olavide of Seville, Spain, were able to provide first experimental evidence that a specific form of memory associations is encoded in the cerebral cortex and is not localized in the hippocampus as described in most Neuroscience textbooks.

The new study is a game changer since it strongly suggests that the motor cortical circuits itself, and not the hippocampus, is used as memory storage.

Henry Molaison, known widely as H.M., is a famous name in memory research. Large parts of the American‘s hippocampus – the region of the brain that is a major element in learning and memory processes – were removed in the 1950s in an attempt to cure his epileptic seizures. He subsequently suffered severe memory lapses and was no longer able to remember virtually anything new he had learned. Most scientists thereby concluded that the hippocampus is the site of long-term memory.

However, the extent of H.M.’s brain damage was obviously underestimated, because other regions in addition to the hippocampus were also removed or damaged in the surgical procedure. The researchers from Heidelberg and Seville have therefore investigated the learning behaviour of genetically modified mice in which NMDA receptors are turned off only in the motor cerebral cortex. NMDA receptors bind the neurotransmitter glutamate to the synapses and become active when several signals feed into one synapse at the same time. They are the central molecular elements of learning processes, being involved in increasing or decreasing transmission of the signals to synapses.

As the new study shows, in the motor cortex this so-called synaptic plasticity no longer functions without the NMDA receptors. The scientists were thus able to rule out the hippocampus or other regions as the cause for their observations. Based on the new findings, it is the cerebral cortex, not the hippocampus that is the storage site for some forms of memory.

In behaviour tests, so called eyeblink conditioning, animals with and without NMDA receptors in the primary motor cortex had to learn to link a tone with a subsequent electrical stimulus of the eyelid. This association of two sensory inputs involves the cerebellum which coordinates the necessary movements, as well as the hippocampus and the cerebral cortex, which are important learning and memory centres. “After a learning phase, the animals’ reflex is to close their eye when they hear just the tone. Without NMDA receptors in the primary motor cerebral cortex, the genetically modified mice on the other hand cannot remember the connection between the tone and electrical stimulus, and therefore they keep their eyes open despite the tone”, explains Mazahir T. Hasan of the Max Planck Institute for Medical Research.

The researchers have thus complemented the findings of their Heidelberg-based colleagues that the hippocampus is not the seat of memory. In July 2012, Rolf Sprengel and Peter Seeburg from the Max Planck Institute for Medical Research discovered that mice without NMDA receptors in the hippocampus are still quite capable of learning. “We now think that the hippocampus provides the necessary environmental cues, which are transmitted to the cortex where learning-dependent associations take place. Memories are thus stored at various sites in the cerebral cortex on a long-term basis”, explains Hasan.

The findings of Hasan and Delgado-Garcìa thus represent a paradigm-shift in memory research as they make clear that the cerebral cortex is the brain region where memory associations are linked and stored – not the hippocampus. An advanced and detailed knowledge of the mechanisms for the acquisition, consolidation, and recall of associations in the brain is the prerequisite for a therapeutic treatment of the devastating effects of memory loss in various neurological diseases, such as amnesia, Alzheimer`s disease and dementia.