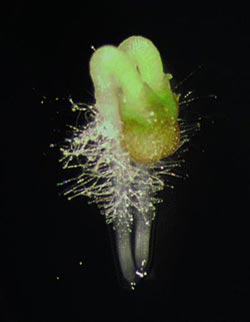 A boost of vitamin C results in the production of twin seedlings of tobacco. Credit: Gallie Lab, UC Riverside<br>

Biochemists at the University of California, Riverside report a new role for vitamin C in plants: promoting the production of twins and even triplets in plant seeds.

Daniel R. Gallie, a professor of biochemistry, and Zhong Chen, an associate research biochemist in the Department of Biochemistry, found that increasing the level of dehydroascorbate reductase (DHAR), a naturally occurring enzyme that recycles vitamin C in plants and animals, increases the level of the vitamin and results in the production of twin and triplet seedlings in a single seed.

The value of the discovery lies in the potential to produce genetically identical seedlings and increase production of high-value crops.

“The ability to increase fertility can be extremely useful when the inherent rate of fertility is low or the value of the crop is great, such as corn in which the production of multiple embryos would significantly boost its protein content,” Gallie said. “The extra seedlings per seed may also enhance per-seed survival chances for some species.”

Study results appear in the online international journal PLoS ONE.

Although they used tobacco in their research, Gallie predicts vitamin C could generate twins and triplets in other plants as well.

“Because the early stages of embryo development are so conserved among plant species, we expect that vitamin C will have a similar effect in almost any plant,” he said.

A question raised by the study is whether vitamin C might have a similar effect in humans. In contrast to most animals, humans cannot make vitamin C and it must, therefore, be obtained regularly from dietary sources.

“Although the development of plant and animal embryos differ in many respects, the manner in which the genetically identical twins were produced in our study is similar to that for identical human twins in that it is the very first division of the fertilized egg into two separate cells that produces the two separate embryos, resulting in two seedlings in plants or two fetuses in humans,” Gallie said. “Despite the differences in the subsequent development of embryos in plants and humans, the critical effect of vitamin C is on this very first cell division.”

To Gallie's knowledge, no study linking vitamin C to twins in humans has been carried out to date.

“Humans are mutants in that we lack the last enzyme in the pathway needed to produce vitamin C,” he said.

Vitamin C is well known to prevent scurvy, a disease affecting collagen synthesis, iron utilization, and immune cell development. It also improves cardiovascular and immune cell function and is used to regenerate vitamin E. The vitamin is present at high levels in some fruits such as citrus and some green leafy vegetables, but present in low levels in those crops most important to humans such as grains.

Vitamin C is as essential for plant health as it is for humans. It serves as an important antioxidant, destroying reactive oxygen species that can otherwise damage or even kill cells. In plants, vitamin C is important for photosynthetic function, in controlling water usage, in providing protection against pollutants such as ozone, and promoting growth.

A grant from the University of California Agricultural Experiment Station supported the study.

Previously, Gallie and Chen, who helped develop technology to increase vitamin C in plants, showed that a boost of the vitamin can help plants defend themselves against the ravages of ozone — smog's particularly nasty component. They also showed that reducing DHAR increases a plant's responsiveness to drought conditions.

The University of California, Riverside (www.ucr.edu) is a doctoral research university, a living laboratory for groundbreaking exploration of issues critical to Inland Southern California, the state and communities around the world. Reflecting California's diverse culture, UCR's enrollment has exceeded 20,500 students. The campus will open a medical school in 2013 and has reached the heart of the Coachella Valley by way of the UCR Palm Desert Center. The campus has an annual statewide economic impact of more than $1 billion. A broadcast studio with fiber cable to the AT&T Hollywood hub is available for live or taped interviews. UCR also has ISDN for radio interviews. To learn more, call (951) UCR-NEWS.