How molecules teeter in a laser field 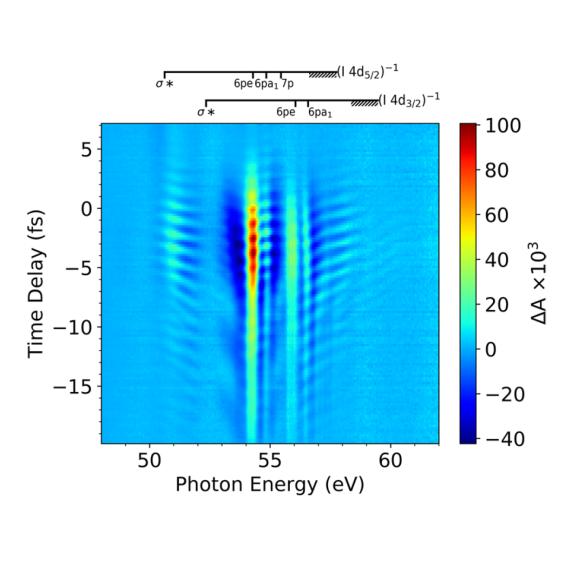 Measured transient change of the XUV absorbance in the 4d-core-to-valence (σ*) and 4d-core-to-Rydberg spectral region in CH3I molecules. Pronounced sub-cycle oscillations at twice the NIR laser frequency are observed in the region of the core-to-Rydberg transitions, while the core-to-valence transitions are only weakly affected by the field. The observed effect is traced back to the higher polarizability of the Ryberg states, which makes them more susceptible to the interaction with the laser field Credit: MBI Berlin Usage Restrictions: The image may only be used with appropriate caption and credit.

The reported work represents the first attosecond transient absorption spectroscopy (ATAS) experiment on a polyatomic molecule. In an ATAS experiment, the absorption of photons in the extreme ultraviolet (XUV) spectral range (provided in the form of an isolated attosecond pulse or an attosecond pulse train) is studied in the presence of an intense infrared laser field, whose relative phase with respect to the XUV radiation is controlled.

“Initially somewhat surprising, we found that the infrared field affects the weak core-to-Rydberg transitions much more strongly than the core-to-valence transitions, which dominate the XUV absorption,” says MBI scientist Lorenz Drescher. The published paper is part of his PhD work at MBI.

Accompanying theory simulations revealed that the Rydberg states dominate the laser-dressed XUV absorption due to their high polarizability. Importantly, the reported experiment offers a glimpse into the future.

“With the advent of attosecond XUV light sources in the water window, ATAS of light-induced couplings in molecules is anticipated to become a tool to study ultrafast phenomena in organic molecules,” he adds. In this wavelength regime, transitions from core-orbitals in nitrogen, carbon and oxygen atoms are located. MBI is at the forefront of developing such light sources, which will allow the researchers to study the building blocks of life.