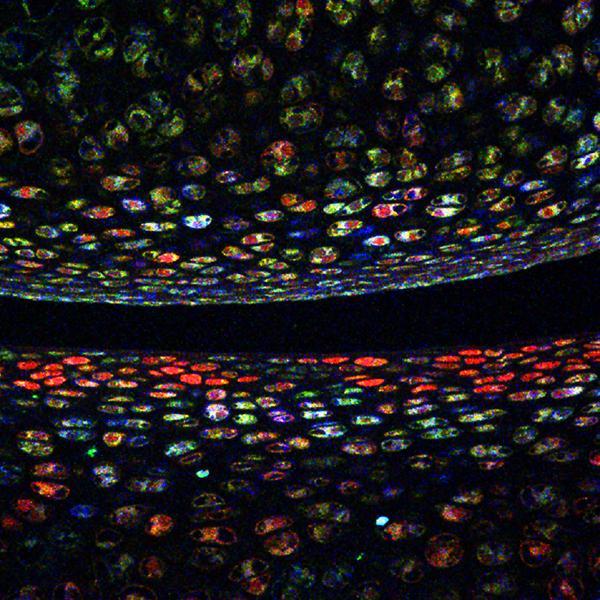 Developed at Harvard's Center for Brain Science, the technique involves coding multiple colors of florescent protein into a cell's DNA. As genes recombine inside the cell, the cell elaborates a color unique to its genetic code. For blood stem cells, that color becomes a genetic signature passed down to daughter cells; purple stem cells, for example, will only make purple blood cells.

Two independent research teams, one led by David Scadden, HSCI co-director and Gerald and Darlene Jordan Professor of Medicine at Harvard University, and the other by his colleague Leonard Zon, HSCI Executive Committee member and director of the Stem Cell Program at Boston Children's Hospital, adapted the color-based labeling to the blood system to better understand how blood stem cells behave.

In a study recently published in Nature Cell Biology, a research team led by Scadden found that in mice individual blood stem cells had a specific and restricted blood production repertoire.

“We used to think of stem cells as the mother cell that gives rise to all these other cells in the system on an as needed basis,” said Vionnie Yu, first author of the study and, at the time of the research, a postdoctoral fellow in Scadden's lab. But their results suggest that stem cells have a scripted set of responses and cannot make just any blood cell type.

When transplanted into a new environment, each cell not only consistently made the same mature blood cell types but also the same number of those cells. Additionally, clones responded similarly to inflammatory and chemotoxic stress, suggesting the cells had a hardwired memory dictating their behavior. They found that this memory was written into the stem cell epigenome.

Blood stem cells, said Scadden, may be more like chess pieces with a fixed way they can behave within the system.

“When you are young and have a full chess set you can mount a vigorous and multilayered defense to an attack on your system,” Scadden said, “but if you lose chess pieces with age or you don't receive a full suite of players during a bone marrow transplant, the pieces you have left could determine your ability to protect yourself.”

In addition to looking at blood stem cells in adult mice, color tagging also allows researchers to explore the blood system as a zebrafish embryo develops.

“We've been working with David Scadden for years as part of the HSCI. Initially, we presented our work at a joint lab meeting and realized we could study stem cell clones with this multi-color system,” said Zon, who is also a professor in Harvard's Stem Cell and Regenerative Biology department. “We shared ideas and results, and even wrote a grant together on the topic. It is wonderful that studying clonal dynamics in two different animals could provide such complementary information.”

In a study published yesterday in Nature Cell Biology, the researcher team led by Zon used the color tagging system to define the origin and number of stem cells that contribute to lifelong blood production.

About 24 to 30 hours after fertilization, dozens of stem cells budded off from the dorsal side of the aorta. Only twenty made it to a secondary site before heading to the kidney marrow, the zebrafish equivalent to human and mouse bone marrow.

After transplanting the multicolored marrow into fish that had received sublethal doses of radiation, the researchers found that some blood stem cell lineages supplied a greater proportion of blood than they had before and that certain lineages could survive harsher conditions than others.

Knowing which cells are responsible for blood production could have implications for understanding the development of blood cancers, explains Jonathan Henninger, a graduate student in Zon's lab at Boston Children's Hospital and first author in the study.

For example, one blood stem cell could develop a mutation that gives it a competitive edge, allowing it to take over the blood system.

“If that cell starts behaving badly, it could lead to blood disorders, such as myeloid dysplasia and leukemia,” Henninger said.

Researchers know these disorders come from a single stem cell or a downstream progenitor cell, said Henninger, but right now they are looking at populations of stem cells in bulk. “To be able to identify that single cell that went awry could help us better understand these diseases.”