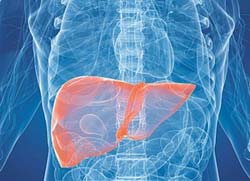 The ELF test (Enhanced Liver Fibrosis test) takes approximately one hour to complete and requires only a blood sample. The process is therefore less invasive but just as reliable as the previously required biopsy, and it usually takes about a week to deliver a biopsy result.

The new test was developed by Siemens Healthcare in collaboration with University College London and can be used as a routine test on the Siemens ADVIA Centaur Immunoassay System.

Liver fibrosis is the result of chronic liver damage caused by vi-ral hepatitis, alcoholic cirrhosis, or fatty liver disease. It is characterized by scarring of the liver tissue, which can lead to cirrhosis or cancer of the liver over the long term — a frequent cause of death worldwide.

At present, the “gold standard” for assessing the severity of a liver fibrosis is a liver biopsy, which involves the removal of a small amount of liver tissue. This biopsy has drawbacks, however: It is painful; it entails some risk for the patient; and it tests only a small sample of the liver.

With the automated ADVIA Centaur ELF Test, a fast and mini-mally invasive technique is now available for determining both the severity of a liver fibrosis and the risk that it will worsen. The test examines three direct blood serum biomarkers: hyaluronic acid (HA), procollagen III N-terminal propeptide (PIIINP), and the tissue inhibitor of metalloproteinase 1 (TIMP-1). These direct biomarkers are molecules that are involved in the formation of fibrosis. In the test, special reagents react with the biomarkers and generate light in the process. The greater the intensity of this chemiluminescence, the greater the presence of the biomarker.

A special algorithm is used to convert the results of the three biomarkers into the ELF score, which indicates the degree of fibrosis. The combination of three biomarkers increases the accuracy of the test. As an international clinical trial has shown, the ELF test can precisely differentiate between slight, moderate, and serious cases of fibrosis. In the event of slight or moderate fibrosis, patients normally have no symptoms. Doctors can thus intervene before significant damage to the liver and monitor the progress of therapy.

To complement the ELF test, Siemens is also offering imaging and laboratory diagnostic technologies like hepatitis blood tests and ultrasound systems that help physicians identify liver fibrosis at an early stage and monitor its development.