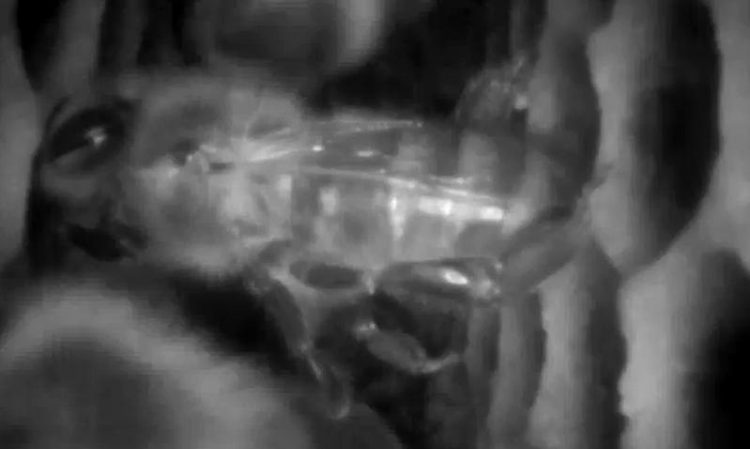 A forager bee has clamped itself between two combs using its head and the end of its abdomen so it can sleep. This image comes from a hive and was taken using an endoscope with an infrared light. (Photo: Hobos team)

The activities in a bee colony are highly organized. The insects adhere to a strict division of labor: cleaning combs, feeding the brood and the queen, producing wax and building combs, keeping watch in front of the hive, foraging for nectar and pollen – each of these tasks is carried out by a specific “professional group”.

But what is the situation with periods of sleep and rest? Do these merely represent a lack of activity, where the bees simply do nothing in the location they happen to be in at that time? Or does the bee colony also exhibit sleep behavioral patterns that are specific to their professional groups? This is exactly what happens, as biologists Barrett Klein, Martin Stiegler, Arno Klein, and Jürgen Tautz from the universities of Würzburg and Wisconsin – La Crosse (USA) report in the journal PLoS ONE.

Inside workers sleep in the middle

Young bees that work inside generally sleep in empty cells close to the middle of the hive, usually in the breeding area. They have several sleep periods daily, spread over day and night. “The breeding area is a bustling place around the clock,” says Jürgen Tautz, “so empty cells there presumably offer the least chance of being disturbed while sleeping.”

When bees switch from inside to outside service, their sleep periods are gradually delayed. Tautz explains: “The older the bees become, the less they sleep. As forager bees, they demonstrate a clear day-night rhythm to their sleeping behavior. They then generally sleep outside cells and closer to the edge of the combs. There they are likely to be largely undisturbed at night.”

Sleep in insects: The door to this research field was opened in 1983. At that time, German zoologist Walter Kaiser presented new findings about honey bees, and Swiss researcher Irene Tobler published a comparable paper about cockroaches.

The fact that non-vertebrates also demonstrate a genuine sleep behavior came as such a surprise back then that many scientists were reticent in their response, as Tautz explains. Würzburg bee researcher Martin Lindauer had found early indications as far back as 1952: During continuous day-night observations of individual forager bees, he noted that they were “idle” at night especially.

“Over time, more and more similarities have emerged between sleep in bees and sleep in humans,” says Tautz. While initially bee sleep was only detected in phases of immobility, scientists later identified periods of sleep of varying depth as well in the flying insects. As in humans, sleep deprivation in bees also reduces their ability to learn and communicate.

Also common to both is the fact that, like in humans, many questions remain unanswered regarding the biological function that sleep has in bees. Various explanations have admittedly been proposed by the scientific community, but none of them is universally recognized. One hypothesis assumes, for example, that the organism regenerates itself during sleep. Another regards sleep as an energy-saving measure, and a third suggests that during sleep the brain separates important from unimportant information, meaningfully committing the former to memory.

The Würzburg research team is keen to conduct further studies to find out more about how bees sleep. Tautz’s team will use a variety of tools, including the Hobos system (Hobos stands for “Honeybee Online Studies”): This monitors the activity in a beehive online around the clock using various sensor and measuring techniques, and the values can be retrieved on the Internet: http://www.hobos.de

Using Hobos, the Würzburg researchers have now also discovered a previously unknown sleep posture in bees: The insects clamp themselves between two combs using their head and the end of their abdomen and leave their antennae and legs dangling relaxed. They can remain completely motionless in this position for up to 30 minutes. Otherwise, bees sleep by simply squatting in one place with their antennae hanging down.