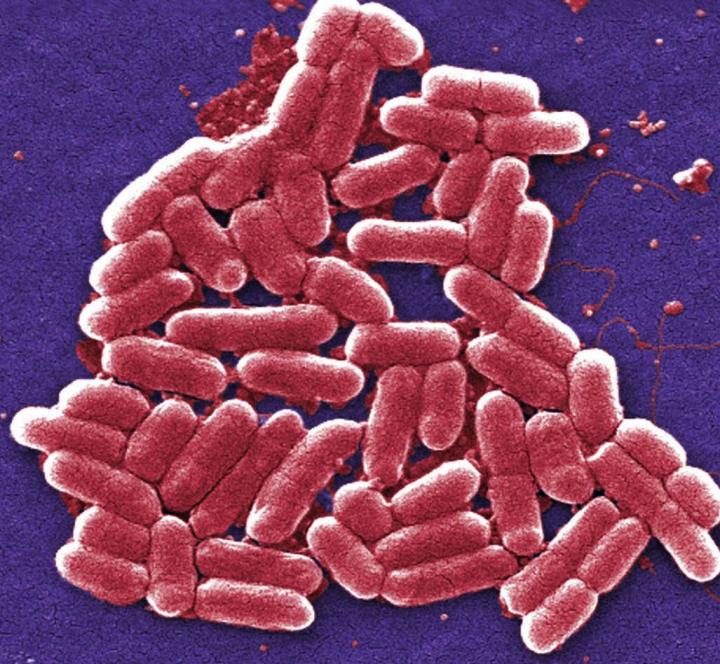 Rice University scientists have built a model to predict how long, on average, it takes to eradicate bacterial infections like those caused by shigella, above, with antibiotics. The model could help doctors fight resistance by prescribing antibiotics that neither over- or under-dose a patient. Credit: U.S. Centers for Disease Control and Prevention

If an antibiotic doesn't kill all the bacteria that infects a patient, the surviving bugs may be particularly adept at timing their resurgence.

Anatoly Kolomeisky, a Rice professor of chemistry and chemical and biomolecular engineering, considers antibiotic resistance “the most serious problem of the 21st century.”

A new study by Kolomeisky and postdoctoral researcher Hamid Teimouri shows that fluctuating growth rates of bacteria can increase the time it takes for a bacterial colony to die out and give it a better shot at developing resistance.

“Our calculations suggest this fluctuation, which bacteria can easily do, might help them bide their time and try different mutations,” Kolomeisky said. “We think this is the possible first step in antibiotic resistance.”

Their theory appears in the Royal Society journal Interface.

The researchers show that there is no correlation between the bacterial extinction probabilities widely used to determine antibiotic doses and actual extinction times.

“There is huge abuse of antibiotics in the world, and especially in this country,” Kolomeisky said. “In the last five years, there's been a 4 percent increase in antibiotic prescriptions. Essentially, a huge amount of antibiotics is given to people when it's not needed.”

The researchers argued it should someday be possible to prescribe a more accurate dose by knowing the size of an infecting colony and the average time it will take to completely eradicate it. They present a preliminary model, from which the pharmaceutical companies might learn how to develop better strategies to improve treatment of infections.

Bacterial population dynamics are key to the study, Kolomeisky said.

“Now, when doctors calculate how much antibiotic you should get, they treat everyone equally,” he said. “That's already a huge mistake: They assume you have a huge amount of bacteria in your body and use a very simple deterministic model to prescribe the minimal concentration of antibiotic. Below that threshold, they say you will not be cured, and above it, you will always be cured.

“So everyone is getting exactly one tablet per day, and it doesn't matter whether you're a kid or an adult,” he said.

That one-size-fits-all strategy doesn't account for fluctuations in the growth rate of bacteria, Kolomeisky said. The new model incorporates these random fluctuations when averaging the amount of time it takes a population to die.

“The problem comes when the antibiotics are working and you come to where there's almost no bacteria,” he said. “When there's almost none or the numbers are relatively small, so-called stochastic (random) effects become important. We know that it's enough to have as few as 10 salmonella or shigella bacteria for the infection to start again.”

Kolomeisky said current models only tell doctors the probability that a course of antibiotics will cure a patient.

“We care much more about the average time to be cured, not the probability,” he said. “This will give doctors a much clearer description of what should be done.”

The study has implications for agriculture, Kolomeisky said.

“Food supplies 75 percent of antibiotics,” he said. “We need to optimize antibiotic activities there as well, to lower the levels of antibiotics getting to people.

“This is a very long way from real applications, but it should give industry some ideas of what to do next and how to couple it with biochemical studies,” Kolomeisky said. “It's not enough to investigate only the biochemical and genetic parts of bacterial infection. Knowing the population dynamics aspects of the antibiotic action can clarify a lot of issues.”

The Welch Foundation, the National Science Foundation and the Center for Theoretical Biological Physics at Rice supported the research.

This news release can be found online at https://news.rice.edu/2019/03/21/bacteria-bide-their-time-when-antibiotics-attack/

Rice University researchers Anatoly Kolomeisky, left, and Hamid Teimouri have built a theoretical model to predict how long, on average, it takes to eradicate a bacterial infection with antibiotics. The model could help doctors fight resistance by prescribing antibiotics that neither over- or under-dose a patient. (Credit: Jeff Fitlow/Rice University)

Rice University scientists have built a model to predict how long, on average, it takes to eradicate bacterial infections like those caused by shigella, above, with antibiotics. The model could help doctors fight resistance by prescribing antibiotics that neither over- or under-dose a patient. (Credit: U.S. Centers for Disease Control and Prevention) Located on a 300-acre forested campus in Houston, Rice University is consistently ranked among the nation's top 20 universities by U.S. News & World Report. Rice has highly respected schools of Architecture, Business, Continuing Studies, Engineering, Humanities, Music, Natural Sciences and Social Sciences and is home to the Baker Institute for Public Policy. With 3,962 undergraduates and 3,027 graduate students, Rice's undergraduate student-to-faculty ratio is just under 6-to-1. Its residential college system builds close-knit communities and lifelong friendships, just one reason why Rice is ranked No. 1 for lots of race/class interaction and No. 2 for quality of life by the Princeton Review. Rice is also rated as a best value among private universities by Kiplinger's Personal Finance.