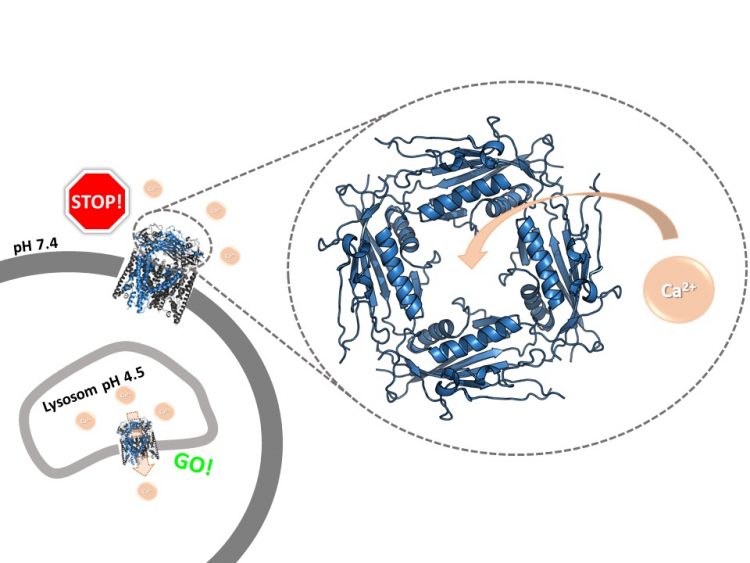 A doorkeeper ring: The extracytosolic/lumenal domain of the human TRPML2 ion channel, whose structure the present study elucidated for the first time, functions as a pH-dependent calcium controller. It regulates the function of the channel in different cellular compartments. Ill./©: Kerstin K. Viet

Ion channels are pores in the membrane of cells or cell organelles. They allow positively or negatively charged particles, so-called ions, to be transported across the membrane. Biochemists at Johannes Gutenberg University Mainz (JGU) have now succeeded in imaging an important regulatory region of the human TRPML2 calcium ion channel at high resolution, an area of the channel shaped like a large ring on one side of the membrane.

This ring acts like a doorman, deciding whether ions can move through the channel. “Our study has revealed the structure of the ring, which is also called the extracytosolic/lumenal domain (ELD), in human TRPML2 channels, and also that it is this domain that is responsible for the channel's interaction with calcium,” said Professor Ute Hellmich of the JGU Institute of Pharmacy and Biochemistry – Therapeutical Life Sciences.

Depending on the pH value, the calcium ions can open or block the channel, and therefore control their transport across cellular membranes.

Hellmich's research group investigated which structural properties of the ion channel ring are responsible for allowing calcium ions to pass. “Calcium is an important cellular messenger that also plays a role in many diseases,” explained Hellmich. The element performs numerous tasks in the body, including regulating enzymes and helping with membrane fusion.

TRPML2, short for transient receptor potential mucolipin 2, is an ion channel of the mucolipin subfamily of TRP channels involved in sensory perception in humans. TRPML2 plays a role in the immune response to infections and increases the infectivity of Zika and dengue viruses. In addition, mutations in TRPML ion channels can result in blindness, deafness, and neurological damage in humans.

The pH value is crucial for ion channel activity

As Hellmich makes clear, ion channels are not simple holes. They can be actively opened and closed. This, in turn, activates and controls cellular pathways. “We have now discovered that binding of calcium to the TRPML2 extracytosolic/lumenal domain on top of the channel is dependent on pH,” stated Kerstin Viet, first author of the paper in the scientific journal Structure. This research was part of her Master's thesis and resulted in her being awarded the Adolf Todt Foundation Prize.

At a higher pH value of around 7, found at the outside of the cell, the calcium ions can bind to the ring and thus block it. Conversely, the calcium ions are no longer able to block the opening at a lower pH typical of certain intracellular compartments. “The ring acts like a gatekeeper for the rest of the ion channel,” said Viet.

This therefore regulates the activity of the channel: It is important that the ion channel is only activated within the cell, where the pH is generally low; in effect the channel is only opened when a particular cellular mechanism signals that it requires calcium. Unprompted activation on the cell surface could well result in damage to the cell.

“The regulation mechanism is clever. It is also relevant, for example, to how the cell reacts to a viral infection,” said Hellmich, adding that the entire process just when and how an ion channel is opened or closed is not yet fully understood. The other two ion channels of the human mucolipin subfamily, TRPML1 and TRPML3, also have a similar doorkeeper ring. The study's results therefore make it possible for the first time to compare all three subtypes.

This first identification of the structure of the ion channel TRPML2 was achieved by the Membrane Biochemistry group of Professor Ute Hellmich working in close cooperation with the JGU Pharmacy group of Professor Tanja Schirmeister. They also collaborated with scientists from the European Synchrotron Radiation Facility (ESRF) in Grenoble, and the working groups of Professor Nina Morgner of Goethe University Frankfurt and Professor Hermann Schindelin of Julius-Maximilians-Universität Würzburg.

Image:
http://www.uni-mainz.de/bilder_presse/09_biochemistry_TRPML2_ion_channel.jpg
A doorkeeper ring: The extracytosolic/lumenal domain of the human TRPML2 ion channel, whose structure the present study elucidated for the first time, functions as a pH-dependent calcium controller. It regulates the function of the channel in different cellular compartments.
Ill./©: Kerstin K. Viet