A radical shift to link soot formation and interstellar evolution 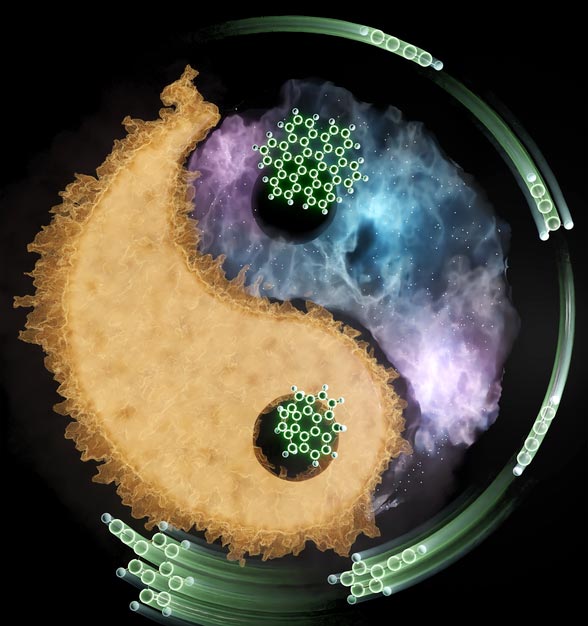 Several pathways are proposed to explain how these large organic molecules form. These typically involve a cascade of chemical reactions that assist in removing hydrogen atoms from aromatic compounds — organic compounds comprising one or more benzene rings — to generate reactive free radicals and fusing these radicals with small hydrocarbons to yield clusters. Yet, as well as being slow, this cascade also relies on a continuous supply of radicals.

“During combustion, soot formation can be significant in a reaction environment that is deficient in radicals,” says postdoc Hanfeng Jin. “Likewise, the temperature in the interstellar medium is too low to maintain a sufficient radical pool, and radicals produced by high-energy photons in the galaxy are rare,” he adds. This contradicts current hypotheses on PAH formation, whereby radical regeneration hinges on a sequential hydrogen removal.

Departing from convention, the team led by Aamir Farooq devised a mechanism in which PAH growth consumes few radicals. The mechanism involves so-called resonance-stabilized radicals, which can bind to compounds bearing double or triple carbon bonds and transfer their reactive radical site to the resulting intermediate. This allows successive addition reactions to occur and produces larger clusters without the need for activation.

Butadiyne is a compound that contains two triple bonds that exists in relatively high concentration in hydrocarbon flames, and also in Saturn’s moon Titan. The researchers evaluated the addition of butadiyne to the resonance-stabilized radical propargyl, a key PAH precursor that is also common in interstellar chemistry.

Computational predictions and elementary reaction experiments revealed that the propargyl radical first reacted with butadiyne to produce a seven-carbon aromatic compound and its corresponding resonance-stabilized radical fulvenallenyl. Further reaction yielded a larger eleven-carbon cluster consistent with the fusion of fulvenallenyl with butadiyne without additional activation.

“This continuous butadiyne addition and cyclization mechanism is applicable in radical-deficient environments, such as post-combustion of high-load engines and interstellar media evolution,” Jin says.

Delving further into the creation of the first aromatic ring, crucial for soot and PAH formation, the researchers also discovered that propargyl provided a seven-carbon resonance-stabilized radical called vinyl-cyclopentadienyl as the first aromatic ring when added to the unsaturated compound vinylacetylene. “Originally proposed seven-carbon radicals contributing to first-ring formation were derived from benzene and the five-carbon cyclopentadienyl radical,” Jin explains.

Theory and experiments suggested that, similar to fulvenallenyl, the newly obtained vinyl-cyclopentadienyl radical was a critical intermediate in the production of larger resonance-stabilized radicals by clustering without involving benzene; thus, it offers a third pathway in the inception of aromatic precursors to PAHs.

“Resonance-stabilized radical chain reactions involve a collection of PAH growth pathways. So, more of them will be discovered in future investigations,” Jin says. While exploring alternate pathways, the researchers are also developing more accurate kinetic models to better simulate PAH formation during combustion and interstellar phenomena.