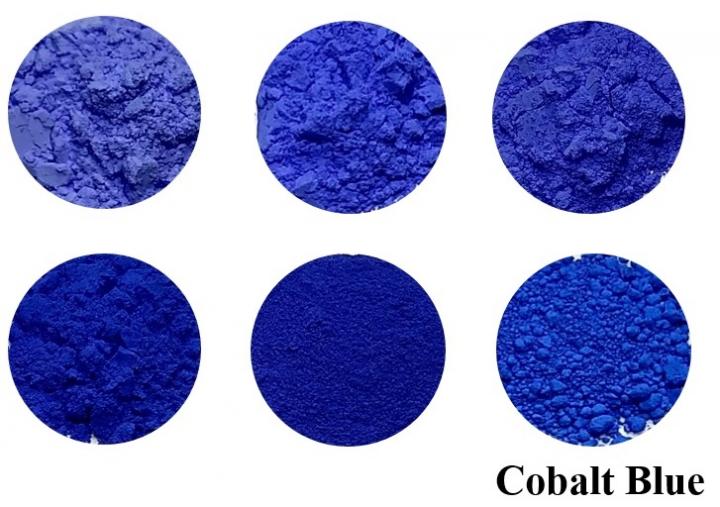 For the last 200 years, cobalt blue (CoAl2O4) has been a dominant commercial blue pigment because of its color intensity, ease of synthesis and versatility.

However, 33% of the colorant by mass is carcinogenic Co2+, making cobalt blue relatively expensive and environmentally harmful to produce.

The researchers were inspired by the crystalline structure of a light-blue mineral called hibonite. The team systematically substituted Al3+ (aluminum) ions in hibonite with Co2+, Ni2+ (nickel) or Ti4+ (titanium) ions.

The resulting series of pigments showed a range of intense blue colors, some with reddish hues. The pigments were stable even when soaked in acidic or basic solutions.

In contrast to cobalt blue, the new blues reflected near-infrared light, which could make them useful as 'cool pigments' in energy-saving, heat-reflecting coatings.

Importantly, the Co2+ concentration in the new compounds in hibonite blues was as low as 4% by mass, making the pigments cheaper and more environmentally friendly.

The authors acknowledge funding from the National Science Foundation.

The study is freely availabe as an ACS AuthorChoice article here.

For more research news, journalists and public information officers are encouraged to apply for complimentary press registration for the ACS Spring 2020 National Meeting & Exposition in Philadelphia.

The American Chemical Society (ACS) is a nonprofit organization chartered by the U.S. Congress. ACS' mission is to advance the broader chemistry enterprise and its practitioners for the benefit of Earth and its people. The Society is a global leader in providing access to chemistry-related information and research through its multiple research solutions, peer-reviewed journals, scientific conferences, eBooks and weekly news periodical Chemical & Engineering News. ACS journals are among the most cited, most trusted and most read within the scientific literature; however, ACS itself does not conduct chemical research. As a specialist in scientific information solutions (including SciFinder® and STN®), its CAS division powers global research, discovery and innovation. ACS' main offices are in Washington, D.C., and Columbus, Ohio.