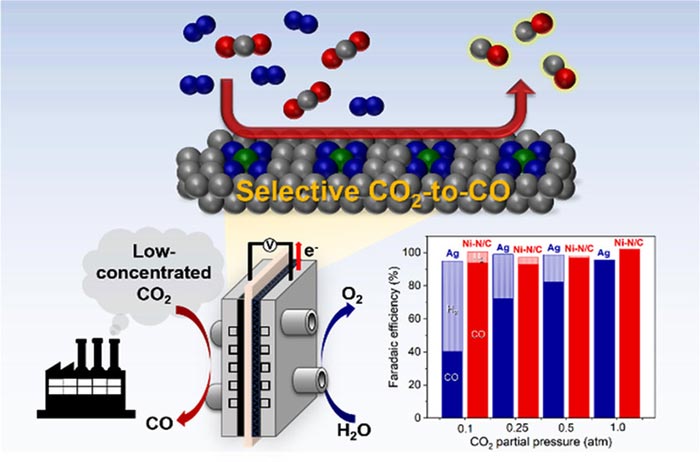 Developed extrinsic operating conditions controlling the water transfer from the anolyte to the catalyst layer and improved CO selectivity at low CO2 concentrations in the MEA electrolyzer.
Credit: Korea Institute of Science and Technology (KIST)

CO2 conversion to valuable chemicals is one of the most promising strategies for mitigating the global climate crisis and developing new processes for chemical production.However, these technologies require supply of high-concentration CO2 gas. This is because CO2 is chemically very stable, which makes it difficult to convert CO2 to other chemicals, and a high-concentration CO2 supply is needed to increase the reaction rate and the efficiency. Actual flue gas from industrial plants typically contains 10% CO2 along with other emissions such as nitrogen, oxygen, and nitrogen oxide; however, until now, it has not been possible to achieve enough efficiency from this low concentration of CO2.

As a catalyst for electrochemical conversion of CO2 to CO, Ag is mainly used due to its high CO productivity. Commercial Ag nanopacticles produce 95% CO when high-concentration CO2 (99.99%) is used, while it produces 40% CO and 60% hydrogen when low-concentration (10%) CO2 is used.

The research team at KIST has developed a nickel single-atom catalyst that can inhibit hydrogen production and increase CO production efficiency. Transition metals such as iron and nickel could not be used as CO2 conversion catalysts due to their lower reactivities than those of noble metals; however, the recent finding that using transition metals in single-atom structure can achieve high CO productivity motivated the team to develop the new catalyst. The team also developed an optimized operating techniques for advanced CO2 conversion system that can directly convert gas-fed low-concentration CO2 by using both experimental and computational simulation methods.

The developed nickel single-atom catalyst can produce 93% CO with low-concentration (10%) CO2, and it is also economically feasible by using non-precious materials composed of nickel and carbon compared to noble Ag catalyst.

Dr. Da Hye Won at KIST said, “The developed catalyst and the operating techniques can be widely applied in electro-chemical conversion systems utilizing low-concentration carbon dioxide. And we are also in the process of development of various technologies to use the flue gas directly without any additional conditioning process to achieve the economic feasibility of electro-chemical carbon dioxide conversion technology.”