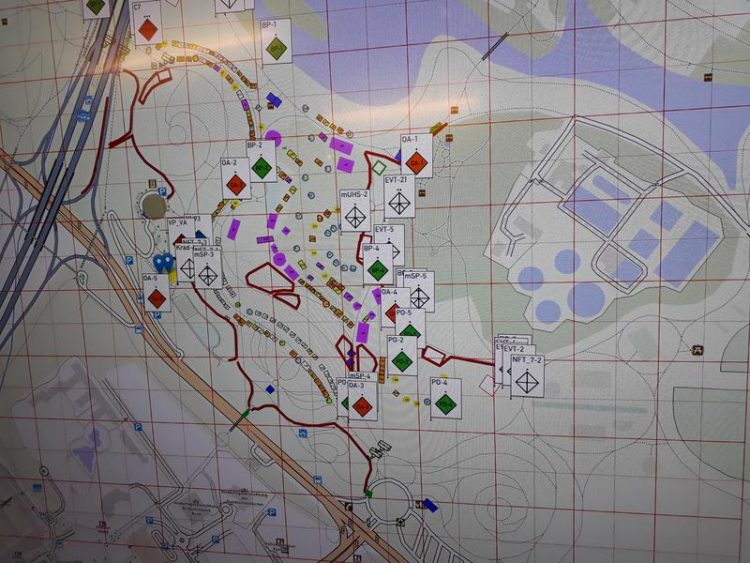 A digital situation map in the command center shows the current locations of the police officers, firefighters, emergency care assistants, and stewards involved in the event. Fraunhofer FIT

Fraunhofer FIT used the noisy hustle and bustle during the colorful Rhine in Flames event in early May for a field trial of their new version of a security staff tracking system for large-scale events.

The tracking device used is the size of a car key. The security staff can attach it to their uniform or tuck it away in a pocket. The trackers transmit their location to the command center. There, the officers-in-charge can display the positions of the individual units in a digital situation map.

“It was essential for us that the trackers do not impede the security staff in their jobs, but offer clear benefits, as they do now,” says Dr. Marco Jahn, one of the scientists involved in the project at Fraunhofer Institute for Applied Information Technology FIT.

The tracking devices use GPS to determine their location, and LoRa to transmit their data. LoRa is a wireless data transmission protocol specifically tailored to the Internet of Things, with a range of several kilometers. This long range allowed using just two antennas to fully and redundantly cover the whole area of the Rhine in Flames event. “One major advantage of our system is that it works independently of cell phone networks and at the same time requires a minimal infrastructure of its own,” adds Marco Jahn.

The tracking devices also feature something like a panic button: A big red button that the user can push in an emergency. This action will highlight the position of the corresponding unit in the digital situation map and display additional information. “We aim to make the tough job of the security forces on the ground easier, to improve the safety of everybody involved,” Marco Jahn goes on to explain.

Over the Rhine in Flames weekend, police officers, firefighters, emergency care assistants, and stewards worked with a total of 45 tracking devices. All involved were satisfied with the user experience and acknowledged the system's benefits. “To be aware of the current locations of all security forces is extremely useful and greatly improves communication and coordination during such events,” says Malik Dine, City of Bonn Department of Public Order.

Fraunhofer FIT developed the system, including the tracking devices, antennas, and the digital situation map, in the European MONICA project. The system is suited to all kinds of events. The MONICA project will again demonstrate it during Pützchens Markt in Bonn (6 – 10 September 2019) and Fête des Lumières in Lyon (5 – 8 December 2019).

The MONICA (Management Of Networked IoT Wearables – Very Large Scale Demonstration of Cultural Societal Applications) project investigates the potential of sensor technology and the Internet of Things to improve visitor safety at mass rallies. The project, which received a European Union grant of €15 million, started in 2017 and will be completed by the end of 2019 (http://www.monica-project.eu).