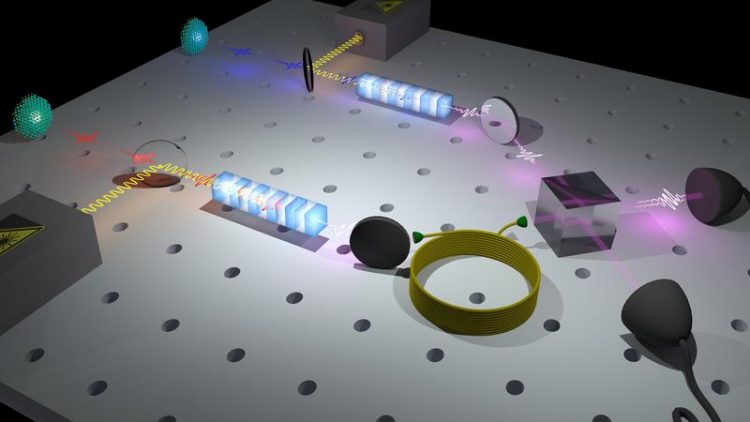 Emission of single photons stemming from remote quantum dots. The wavelength of the single photons is manipulated by mixing them with strong laser fields within small crystals. University of Stuttgart/Kolatschek

Quantum networking is based on the transmission of single photons being used as “flying” quantum bits. The probability to detect a single photon upon fiber transmission decreases exponentially with increasing fiber distance. It is therefore necessary, to use photons with specific wavelength such that transmission within a range of 10 to 100 km is possible via optical fibers. Nevertheless, the quantum signal has still to be repeated as in classical communication channels.

However, such “quantum repeaters” are fundamentally different to repeaters of classical communication as they have to bridge the intermediate distance by means of quantum mechanical effects. The building block of such a technology is the interference of two photons stemming from remote quantum emitters. “In this experiment, we use semiconductor nanostructures as sources of single photons.

They have the big potential to emit single photons at record rates”, says Jonas Weber. The PhD student at the University of Stuttgart is in charge of the handling of the quantum light sources, therefore of the generation and interference of the single photons. “High emission rates are crucial for high data transfer”, further explains Jonas Weber.

The typically used nanostructures, which are referred to as quantum dots, emit photons in a wavelength range which is not compatible with optical fibers. To still exploit the advantages and perspectives of quantum dots, the Quantum Optics group at Saarland University, led by Prof. Christoph Becher, built two independent quantum frequency converters.

With such devices, the emitted photons are mixed with strong laser beams, such that their wavelength is converted and thus prepared for transmission in optical fibers. “Only because of this manipulation, the photons can be transmitted over 10-100 km fiber distance. Without this procedure, every kilometer the signal would have to be repeated.

This wouldn’t be feasible at all”, says Benjamin Kambs, the PhD student in the group of Prof Becher, who was in charge of building and optimizing the two frequency converters.

The physicists were able to show that the necessary photon manipulation does not compromise the quantum mechanical nature of the light. Based on that premises, the emitted photons were sent through 2 km optical fiber and still successfully brought to interference. This is a non-negligible fact, given the rather fragile nature of such quantum states.