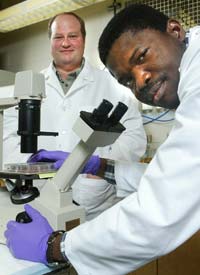 Fat cells, commonly blamed for a number of diseases, also may aid in the body’s defense against illnesses such as diabetes and cancer, according to Purdue University researchers.

“Adipocytes can be functional and beneficial without creating obesity,” Spurlock said. “The key is that we want plenty of adipocytes to meet whatever immunological and endocrinological needs they fulfill, but we don’t want them to overaccumulate lipid.”

In the January issue of The American Journal of Physiology, Spurlock and Kolapo Ajuwon, both of the Department of Animal Sciences and the Comparative Medicine Program, report that pig fat cells respond to infections by producing hormone-like proteins that regulate certain aspects of the body’s immune response.

“This is additional evidence that fat cells behave in many ways as immune cells,” Spurlock said. “It also is the first evidence that adipocyte cells respond directly to bacterial toxins like classical immune cells.”

“Our research documents a pathway by which the adipocytes participate in the immune response,” Spurlock said. “We have very clearly shown that interferon-gamma is increasing expression of cytokines in pig fat cells.”

In another part of the study, the researchers found that a molecule, or ligand, binds to molecules on the outside of pig fat cells incubated in a laboratory dish. In this case the ligand is an inflammatory molecule called LPS. This binding with the receptor molecule on the pig fat cell, like a key in a lock, signals fat cells to produce more of another hormone-like cytokine.

The researchers believe that this is similar to what happens in humans since some pig breeds show marked similarity in cardiovascular disease, hyperglycemia and insulin resistance, Spurlock said. The study’s findings that the LPS ligand and interferon-gamma regulate production of cytokines that impact both energy metabolism and immune function are significant in studying human diseases, including cancer and diabetes.

The factor in the fat tissue that is linked to diseases is the amount of lipid, also known as fatty acid or tricylglycerol, in the adipocytes, he said. As adipocytes accumulate excess lipid, their normal function is distorted and they produce too much of some biochemicals and not enough of others. These abnormalities can culminate in disease.

“For a long time, we have looked for the link between the immune system, obesity and insulin resistance,” Spurlock said. “The fact that fat cells actually promote or secrete factors, such as the cytokine interleukin-6, may be fundamentally linked to insulin resistance in diabetes. This makes adipocytes very important cells.”

People with Type II diabetes produce insulin in their pancreas, but the insulin can’t control their glucose levels. Adipocytes normally produce factors that promote insulin regulation of glucose levels, but these factors don’t function properly when obesity is involved.

Spurlock and his research team now want to determine other factors, such as certain classes of fatty acids, that will activate or suppress the LPS receptor.

“We know there are non-infectious ligands that activate the receptor, so we want to know what they are,” he said. “If we can discover these regulators, then we might be able to find a way to manipulate the receptors and immune pathways to regulate the body’s energy metabolism and apply that to diabetes and cancer.”

The other researchers involved in the study are doctoral student Sheila Jacobi and research associate Joanne Kuske, both of the Purdue Department of Animal Sciences and the Comparative Medicine Program. The program is a collaboration of Purdue’s Department of Animal Sciences, School of Veterinary Medicine and Indiana University School of Medicine with initial funding from the Indiana 21st Century Research and Technology Fund.

Reviving cells after a heart attack