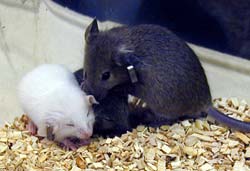 Three mice that are littermates (siblings of the same age). The two mice on the left (one partially hiding under the big mouse) are dwarf mice caused by the Perk mutation. They are less than half the size of the mouse on the right, which is normal.

A team of researchers headed by Douglas R. Cavener, professor and head of the Department of Biology at Penn State University, has announced important findings about the causes of three human diseases: severe, juvenile-onset diabetes; osteoporosis; and Wolcott-Rallison Syndrome, a rare condition whose sufferers exhibit a combination of diabetes, retarded growth, and skeletal abnormalities. Their work suggests promising lines of research for the therapeutic treatment of these diseases. The work will be described in an article in the August 2003 issue of the journal Endocrinology.

Over several years, Cavener’s team has developed and investigated a particular strain of “knockout” mice that are genetically unable to produce the enzyme PERK (pancreatic endoplasmic reticulum kinase). Cavener and his team hypothesize that the PERK enzyme is a specific or global regulator of protein synthesis, which means that the knockout mice are especially useful in unraveling complex physiological and developmental processes. “We are now able to investigate what happens when a particular gene is missing, to see what functions go wrong. Then we work backwards to fill in mechanisms that link the genotype to the phenotype” or the observable outcome, Cavener says.

PERK knockout mice have a very low survival rate because the biomedical problems caused by the absence of the PERK enzyme are so severe. Fully 63 percent die during gestation or the first few days of life which can be traced to failures in the creation or delivery of specific proteins.

The surviving PERK knockout mice have three distinct problems that parallel those seen in humans with Wolcott-Rallison Syndrome. First, the knockout mice grow very slowly so that, as adults, they are about half the size of normal mice. They are strikingly deficient in a factor which regulates growth known as IGF-1. Newborn knockout mice average only about 25% as much IGF-1 in their liver and serum as normal mice. Second, knockout mice have many skeletal abnormalities such as dangerously fragile and porous bones, hunched backs, and splayed limbs. These abnormalities are caused by a lack of collagen, a major structural component of bone. Third, the ability of knockout mice to use sugar (glucose) is abnormal. At birth, the mice are apparently healthy in this regard, with normal levels of glucose and glucose products in their livers and normal numbers of insulin-producing beta cells in their pancreases. After three weeks, juvenile knockout mice develop severe diabetes. Their glucose levels soar to three to four times normal levels and the number of beta cells in their pancreases is reduced. After six weeks, insulin-producing beta cells are rare or completely absent.

In one experiment, Cavener and colleagues focused on the mechanisms behind the retarded growth of PERK knockout mice. By injecting the PERK knockout mice with IGF-1 twice daily during the first three weeks of life, researchers were able to accelerate the neonatal growth rate of the mice. Their growth was markedly improved but not restored to normal rates. They concluded that defects in the regulation of IGF-1 were at least partially responsible for the retarded growth rates in PERK deficient mice. The improvement produced by treating the mice with IGF-1 has exciting implications for developing therapeutic interventions for people diagnosed with Wolcott-Rallison Syndrome.

Cavener emphasizes that it is extremely important that the growth and skeletal problems occur earlier than and independently from the diabetes in these mice. “Knowing which problems are the primary effects of diabetes, and which are independent effects produced by a defect in the same gene, may be of great importance in treating the disease,” Cavener predicts.

In a second experiment, Cavener and his colleagues demonstrated the complexity of the various functions of the PERK gene. They produced transgenic mice that carried a single copy of the PERK gene that was expressed only in the insulin-producing beta cells. Normal mice carry two copies of this gene and knockout mice have none. The PERK gene produced a dramatic change in glucose metabolism. Unlike PERK deficient mice, transgenic mice do not become diabetic as juveniles and retain normal numbers of insulin-producing beta cells.

During the neonatal period the transgenic mice still suffered from retarded growth. Surprisingly, Cavener’s team found that the transgenic mice resumed normal rates of growth as they aged past three weeks. This finding suggests that the slowed rate of growth in juvenile knockout mice is probably a secondary effect of diabetes.

The results of this research program lead Cavener to theorize that the major function of PERK is to sense the activity of cells that secrete such vital proteins as insulin and collagen and to signal the cells to adjust their rate of secretion or cell division to match the needs of the body for these important proteins. Much of the current research in Cavener’s group focuses on testing this hypothesis.