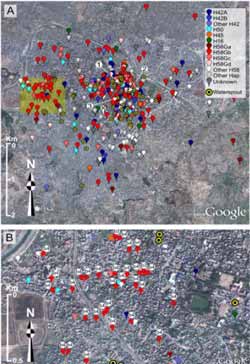 Now, in a twenty-first century equivalent, scientists funded by the Wellcome Trust working in Kathmandu, Nepal, have combined the latest in gene sequencing technology and global positioning system (GPS) case localisation to map the spread of typhoid and trace its source.

Typhoid fever is caused by two bacteria – Salmonella typhi and Salmonella paratyphi. Both of these bacteria are found in Kathmandu and they usually spread through water or food contaminated with faeces. Symptoms of the disease include fever, abdominal pain and vomiting.

Recent advances in DNA sequencing have allowed scientists to accurately track the spread of some diseases by measuring mutations in the pathogen's DNA when the DNA replicates.

However, tracing the spread of typhoid has proved challenging as these mutations are small in number and not detectable by most techniques in use.

Tracing outbreaks of typhoid in Kathmandu also carries its own problem: street names are not used in Nepal, so capturing the addresses of typhoid cases – and hence accurately mapping the outbreaks – has proved challenging to health workers.

In research published today in the journal Open Biology, scientists at the Wellcome Trust Major Overseas Programme in Vietnam and the Oxford University Clinical Research Units in Kathmandu, Nepal, and Ho Chi Minh City, Vietnam, have found a way to accurately map typhoid outbreaks in the city. Their research combines DNA sequencing technology and GPS signalling, and maps the data onto Google Earth.

“Until now, it has been extremely difficult to study how organisms such as the typhoid-causing bacteria evolve and spread at a local level,” explains Dr Stephen Baker from the Oxford University Clinical Research Unit in Vietnam. “Without this information, our ability to understand the transmission of these diseases has been significantly hampered. Now, advances in technology have allowed us for the first time to create accurate geographical and genetic maps of the spread of typhoid and trace it back to its sources.”

To capture the information, health workers would visit a patient's home and use GPS to capture the exact location. They would also take a blood sample from the hospitalised patient to isolate the organism and to allow analysis of the typhoid strain's genotype – its genetic make-up. This genotyping used sequencing technology able to identify single changes in the 'letters' of DNA – the A, C, T and Gs that make up the code.

The researchers found extensive clustering of typhoid infections in particular locations. Yet, perhaps counter-intuitively for a disease that spreads amongst humans, this clustering was unrelated to the density of the local population. In fact, the study showed that people living near to water spouts, for whom these provide their main source of water, and people living at a lower elevation are at substantially greatest risk of contracting the disease.

Typhoid incidence is likely to be associated with faecal contamination of ground water during the monsoon. As S. paratyphi A (a strain of S. paratyphi found in Nepal) appeared to spread downstream from the main focal point, this would put people living in areas with low elevation at higher risk. These two variables, elevation and water spout proximity, are likely to be interconnected, as the water spouts are more common in low lying areas.

The research has also shed light on the role of asymptomatic carriers of the disease in the spread of typhoid. As these carriers do not show symptoms, they are likely to be unaware of their infection and can unwittingly spread the disease. The most famous of such cases was a cook in New York in the early twentieth century, nicknamed 'Typhoid Mary', who is believed to have spread the disease to dozens of people.

If the disease was spreading within a household due to direct transmission – either from an asymptomatic carrier or someone with symptomatic, acute disease, the researchers should be able to isolate the same genotype from a number of individuals in the same household. In fact, the variation of genotypes was more or less random, suggesting that the disease infrequently spreads from asymptomatic carriers. Rather, infections are transmitted predominantly through the environment – for example, through the water source.

Dr Baker adds: “Improvements in infrastructure are fundamental to the control and elimination of typhoid. Poor water quality, sanitary conditions and the presence of carriers mean that the organisms will persist in the community long after the limited window of immunity given by the current vaccine. Without integrating improvements in infrastructure alongside other control measures such as diagnosis, treatment and vaccination, it is unlikely that typhoid can be adequately controlled in places like Kathmandu in the long-term.”

Combating infectious diseases is one the strategic priorities of the Wellcome Trust. Much of this work is carried out at a local level in regions where disease is endemic. This includes several major overseas programmes, including the Wellcome Trust Major Overseas Programme in Vietnam.

Commenting on the research, Dr Jimmy Whitworth, Head of International Activities at the Wellcome Trust, said: “Just as John Snow's pioneering cholera maps of the nineteenth century showed that poor sanitation leading to contaminated water was spreading disease, this study, which combines accurate mapping with the latest in genotyping technology, further reinforces the importance of improving the quality of water supplies and infrastructure for sanitation if we are to seriously tackle diseases such as typhoid.”