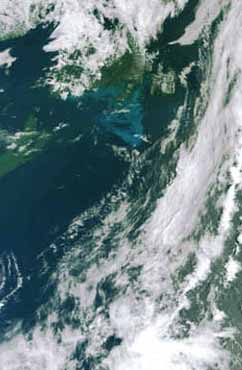 From 800 km in space, you would have to squint really hard to see one of these – a micron-sized phytoplankton and its armoured shell. But when a lot of them get together, say, a few trillion or so…

…what you see is the image below from the European Space Agency’s Medium Resolution Imaging Spectrometer (MERIS) instrument. The sensor, carried onboard the Envisat satellite, acquired imagery of a phytoplankton bloom that occurred this summer in the north Atlantic, off the coasts of Nova Scotia and Newfoundland in Canada.
The large, aquamarine-coloured patch visible in the image is a 300 x 200 km ocean area densely populated with phytoplankton, small aquatic organisms that form the basis of the ocean’s food chain and play a key role in the global ecosystem.

These blooms – the sudden appearance of phytoplankton in massive numbers, enough to colour the ocean and be detected from orbiting sensors– are capable of being analysed now on a global scale only in the past few decades with the advent of satellite-based sensors. The MERIS instrument offers new capabilities to marine researchers interested in phytoplankton blooms and other ocean processes.

Phytoplankton blooms are a fairly common occurrence, most often found in temperate waters. A recent study from the US National Aeronautics and Space Administration and the National Oceanic and Atmospheric Administration found an overall annual decrease in phytoplankton globally, with phytoplankton levels in open waters near the equator increasing significantly, and decreasing in many areas of open water in northern oceans.

By bloom standards, the Canadian one was not particularly large. In comparison, it was smaller than the large blooms seen regularly south of Iceland, which measured 1000 x 300 km in 1991. “It’s very much smaller than the bloom in the Bering Sea in the northern Pacific in 1998-99, which lasted six months or more,” says Prof Jim Aiken with the Plymouth Marine Laboratory (PML), a UK centre for investigating marine biodiversity and the role of the oceans in global climate change.

What made this bloom interesting to researchers was when it occurred, in late summer. Typically, phytoplankton bloom in temperate latitudes every spring. During the winter, the lack of sufficient sunlight, too much wind and lower temperatures keep the phytoplankton population at a minimum. As the season changes, however, the amount of sunlight increases, the water heats up and the surface layer of the ocean stratifies, keeping plants near the surface. The phytoplankton start growing again, “just like land plants do in the springtime,” Aiken describes.

So-called “upwellings” can also cause the population of phytoplankton to explode suddenly. In these events, seen off the west coast of Africa and off the South American coast near Peru, cold water is pushed up from the ocean depths and brings with it rich nutrients, with a resulting explosive growth in the phytoplankton population.

“When the deep water hits the surface, the nutrients plus the sunlight result in a bonanza for the phytoplankton, and you get blooms,” explains Dr. Toby Tyrrell, an ecological modeller with the Southampton Oceanography Centre (SOC), part of the University of Southampton in the UK.

The Canadian phytoplankton bloom was not associated with an upwelling and fell outside the normal springtime bloom pattern. Late summer blooms are a phenomenon that is not completely understood by marine biologists, but one in which satellite imagery is a key scientific tool in conducting further research. “We don’t have a good understanding of what factors can produce phytoplankton blooms later in the year,” Tyrrell adds.

“We can hypothesize in the seasonal successions, the diatoms – minute, single-cell planktons – appear first,” explains PML’s Aiken. “They form glass-like silica shells that use the silicate in the water, but they may not use up all the other nutrients such as nitrates and phosphates. Then other forms of phytoplankton appear later that feed off these other nutrients.”

Based on the optical characteristics from the MERIS image, the phytoplankton colony that appeared off the coast of Canada was probably a species known as Emiliana huxleyi, or Ehux more familiarly, one of the approximately 5000 different species of phytoplankton. As seen in the accompanying electron microscope image, each plate of the shell resembles a car’s hubcap and remains in the ocean after the organism itself has died.

These organisms measure roughly five microns in diameter, with shells, called coccoliths, about one micron thick. Line up ten of them, and they would fit across the width of an average strand of human hair.

They may be small, but collectively they pack a huge punch. “The total phytoplankton biomass is probably greater than that of all the marine animals (zooplankton, fish, whales) put together,” says Tyrrell. “Phytoplankton productivity is one of the primary forces in regulating our planetary climate.”

Phytoplankton are the first course in the food-chain buffet. They provide the basic nourishment for larger zooplankton, shrimp-like krill, and related ocean dwellers known as euphasiids that are, in turn, the food source for several types of fish, seabirds and other marine animals.

Although these links are well known, there are still unanswered questions about the role phytoplankton and phytoplankton blooms play in the production of the types of seafood that we want to appear on our dinner plates.

They also play various, and significant, parts in regulating Earth’s climate and other ecosystems. Large concentrations of this phytoplankton reflect sunlight back out into space; other types absorb sunlight. This affects the Earth’s albedo, the ratio of light reflected off the Earth’s surface versus the amount of sunlight falling on it, thus affecting global warming. Phytoplankton also release sulphur compounds, some of which make it into the atmosphere and there assist cloud formation, shielding the Earth from incoming solar radiation.

Thanks to the presence of photosynthetic chlorophyll pigments, these simple organisms also play a similar role to terrestrial “green” plants in the photosynthetic process. Phytoplankton are able to convert inorganic compounds such as water, nitrogen and carbon into complex organic materials. With their ability to “digest” these compounds, they are credited with removing as much carbon dioxide from the atmosphere as their earthbound cousins.

In the past few centuries, extensive deforestation, changes in land-use patterns and, particularly, the use of fossil fuels have resulted in massive increases of carbon dioxide in the atmosphere. Carbon dioxide is one of several “greenhouse” gases responsible for mediating the temperature of our planet.

“It has been suggested by international committees that the increase in atmospheric carbon dioxide concentration may be responsible for undesirable climate changes causing natural disasters such as floods, desertification and coastal erosion,” Aiken comments, adding that phytoplankton are estimated to account for about 50 percent of the biosphere’s photosynthesis, are strongly involved in the carbon cycle and play a fundamental role in regulating the Earth’s climate.

Despite their beneficial impact on absorbing at least one of the greenhouse gases, more is not necessarily better. In Ehux blooms occurring in the Bering Sea, for instance, diving sea birds could not see their prey because the waters were so murky, according to SOC’s Tyrrell. And, he added, because Ehux build their shells out of calcium carbonate, this alters the water’s alkalinity and actually makes the oceans emit carbon dioxide.

The MERIS instrument onboard ESA’s Envisat satellite was designed with phytoplankton in mind. The primary mission of MERIS, with sensors operating in 15 bands in the visible and near-infrared portion of the spectrum and ground resolutions of 300 and 1200 metres, is to measure sea colour in the oceans and in coastal areas. It’s global objective is to make a major contribution to scientific projects which seek to understand the role of the oceans and ocean productivity in the climate system through observations of water colour and furthering the ability of scientists and researchers to forecast climate changes. A secondary objective is to further understanding of atmospheric parameters associated with clouds, water vapour and aerosols in addition to land surface parameters, in particular vegetation processes.

The MERIS sensor offers full coverage of the Earth’s surface every three days. Data from the instrument can be converted into various of measurements useful to those studying Earth’s oceans, including chlorophyll pigment concentration, suspended sediment concentration, and the levels of various aerosols suspended in the atmosphere over marine environments.

With one band operating at a wavelength of 681-nanometres, MERIS can pick up the characteristic red flourescence of chlorophyll in phytoplankton. The signal is very weak, but the excellent spectral resolution and radiometric accuracy of MERIS permits fluorescent line height measurements, analyses used to quantify phytoplankton concentrations in the water as well as to estimate the physiological state of the biomass. As a result, concentrations of phytoplankton can be detected as low as 0.01 microgram, or 1/100 000 000 of a gram, per litre, a sensitivity that no other satellite sensor can match. As additional experience is gained in using MERIS data, it is expected that the instrument will be capable of distinguishing among different species of phytoplankton, information that can be used to monitor the worldwide distribution of these organisms that are essential to the well-being of the planet.

Imagery from space provides invaluable “eyes in the skies” for researchers looking into phytoplankton blooms and other ocean phenomena. Sensors such as MERIS, MODIS, SeaWiFS, and others carried on satellites including Envisat provide data on a global basis that sea-borne and aerial sensors cannot hope to match.

“Satellite imagery is vital to understanding these oceanic processes. It gives us a chance to know the blooms and to map them with increased accuracy,” Tyrrell adds. “We hardly knew anything about the distribution of this species before satellites came on the scene.”

In short, images such as the ones captured by MERIS of the Canadian phytoplankton event are enabling a better understanding of them to, well, bloom.

CO2 as a raw material for plastics and other products

Stand-up paddle board made from renewable lightweight materials

Flood water: Toxins from the riverbed