Protecting species for the good of global climate 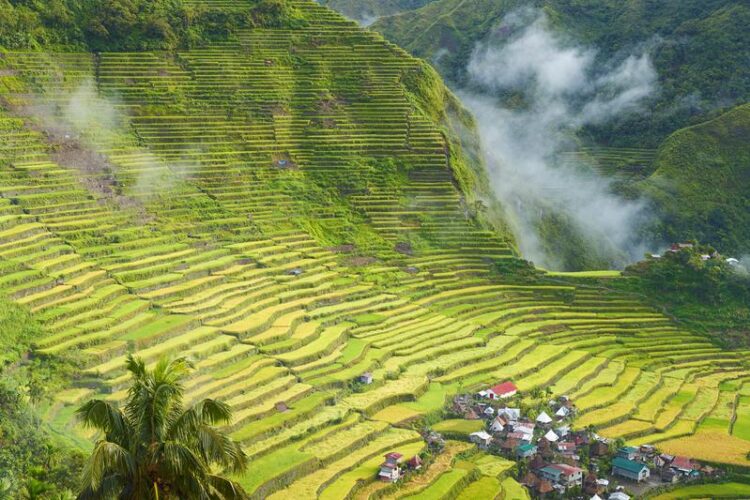 The World Heritage Site with its irrigated fields owes its existence to a continuous water supply from the forests above. While methane is emitted through rice cultivation, the traditional genetic diversity of rice plants is preserved here at the same time, which can form the basis for future land use adaptations. It also preserves the forest, which is characterised by enormous biodiversity and a high proportion of animal and plant species found only there. At the same time, this protection contributes to the sequestration of carbon in the forests.
Credit: © André Künzelmann / UFZ

How climate can benefit from the conservation of biodiversity.

When the global community is expected to meet for the second part of the UN Biodiversity Conference in Kunming, China, in autumn, it must also adopt the next generation of UN biodiversity targets. These will then replace the Aichi Targets that were aimed for until 2020 – and have hardly been achieved. 21 “Post-2020 Action Targets for 2030” have already been pre-formulated. While they still have to be finally agreed, they aim to reduce potential threats to biodiversity, improve the well-being of humans, and implement tools and solutions for the conservation of biodiversity.

In a review study for Global Change Biology, the authors assessed to which extent these 21 biodiversity targets can also slow climate change. The bottom line: 14 out of 21 (i.e. two thirds) of all targets are making a positive contribution to climate protection. “It turns out that conservation measures that halt, slow, or reverse the loss of biodiversity can greatly slow human-induced climate change at the same time”, says lead author Dr. Yunne-Jai Shin of the French National Research Institute for Sustainable Development (IRD). Among others, this applies to the goal of connecting protected areas via corridors or further protected areas on at least 30% of the earth’s surface. “There is growing evidence that the creation of new protected areas and the adequate management of existing ones on land and in the sea help to mitigate climate change through capture and storage of carbon”, says UFZ biodiversity researcher and co-author Prof. Josef Settele. For example, it is estimated that all terrestrial protected areas around the globe currently store 12–16% of the total global carbon stock. And, even though knowledge is still limited, deep-sea ecosystems can also contain important carbon stocks on the seabed (e.g. on remote islands, deep-sea mountains, and Arctic and Antarctic continental shelves). However, the 30% target is still far from being reached. According to current United Nations figures from 2021, the coverage of protected areas on land was 15.7%, and in the sea, 7.7%.

But climate also benefits from some of the other newly formulated global biodiversity goals. For example, one goal is also to restore at least 20% of degraded ecosystems (e.g. tropical and subtropical forests) or coastal habitats (e.g. coral reefs, sea grass beds, and mangrove forests). According to the study, global carbon capture in coastal systems is considerably lower than in terrestrial forests because of their smaller size. However, the amount of carbon captured per unit of coastal vegetation area is considerably higher. Taking biodiversity into account in laws, directives, and spatial planning processes also helps to protect the climate because, inter alia, it prevents the clearing of forests, which are an important CO2 reservoir. Other goals that are positive for both biodiversity and climate protection include the expansion of green and blue infrastructures in cities (e.g. parks, green roofs, and lakes) or better public relations work in order to encourage the general public to deal with waste in a more sustainable way and to consume less.

The authors have compiled 12 case studies in order to illustrate how these biodiversity goals are already being implemented in practice (e.g. in the conservation of African peat lands, the protection of mega-fauna in the Southern Ocean, or the saving of the largest mangrove forests on earth, the Sundarbans, on the border between India and Bangladesh). However, there may also be conflicting goals between the protection of climate and biodiversity. In Central Europe, the preservation of the cultural landscape is an example that shows that not everything can be easily reconciled. On one hand, imitating traditional land use systems instead of intensifying or even abandoning land use has clear advantages for the conservation of biodiversity. “These systems reduce the extinction risk of rare species and varieties that are quite well adapted to an extensive form of agricultural use and promote the preservation of a high diversity of pollinators and natural enemies of pests”, says UFZ researcher Josef Settele. On the other hand, there are conflicts because some of the measures are, in fact, harmful to climate. “Because much of the land is used for agriculture, the proportion of forest is not as high, and less carbon is stored”, he says. In addition, the farming of cattle, sheep, and cows releases methane, which is harmful to the climate. “There is a consensus that we must stop climate change – but this must not be at the expense of nature. We therefore need to find methods to slow climate change and implement adaptation measures without losing biodiversity. This is often possible only through compromises”, says Settele. It would therefore be positive if many of the new global biodiversity targets of the UN Convention on Biological Diversity were implemented. Prof. Hans-Otto Pörtner, co-author and climate researcher at the Alfred Wegener Institute, Helmholtz Centre for Polar and Marine Research (AWI), adds: “The climate problem is now well understood. However, the issue of biodiversity is treated in complete separation – even when it comes to possible solutions. There is also the risk that nature is discussed as a vehicle for solving the climate problem; this is quite problematic. The capacity of ecosystems to slow climate change is overestimated, and climate change is damaging this capacity”. Humans nevertheless believe that nature is capable of overcoming the climate crisis and enabling us to continue or prolong the use of fossil fuels. “But it is the other way round: only when we succeed in drastically reducing emissions from fossil fuels nature can help us to stabilise the climate”, says Pörtner.

Last June, the scientists of the Intergovernmental Panel on Climate Change (IPCC) and the Intergovernmental Science-Policy Platform on Biodiversity and Ecosystem Services (IPBES) set the record straight in a joint workshop report, where they compiled current knowledge on biodiversity and climate change, and defined and prioritised courses of action.