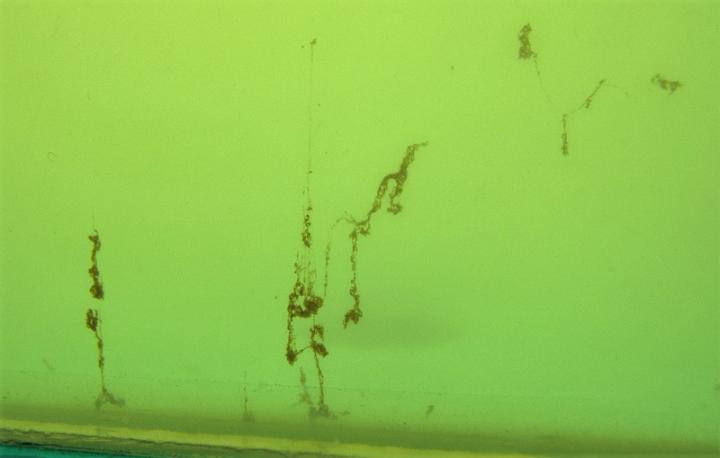 Andrew Wozniak monitored tanks filled with seawater from the Gulf of Mexico and mixed the seawater with oil, plankton and a chemical dispersant used during the Deepwater Horizon oil spill to conduct a chemical analysis of the particles of marine oil snow that fell to the bottom of the tanks. Credit: Andrew Wozniak

If you were able to stand on the bottom of the seafloor and look up, you would see flakes of falling organic material and biological debris cascading down the water column like snowflakes in a phenomenon known as marine snow.

Recent disasters like the Deepwater Horizon oil spill in the Gulf of Mexico, however, have added a new element to this natural process: oil.

During these events, the natural marine snow interacts with oil and dispersants to form what's known as marine oil snow as it sinks from the surface through water column to the seafloor sediments.

The danger with marine oil snow is that it transfers oil and its negative impacts from the water column to the sediments on the bottom of the seafloor, delivering a more diverse suite of oxygenated compounds to sediments and deep-sea ecosystems. These oxygenated forms of many oil compounds are more toxic to organisms in the sediments than are the non-oxygenated forms.

While this result may lessen the impact on near-surface organisms like fish and birds and shellfish, it transfers the oil to the deep ocean where it impacts fauna, deep corals, and fish down there, where adverse impacts were documented after the Deepwater Horizon oil spill.

The University of Delaware's Andrew Wozniak conducted research to investigate the fate and accumulation of marine oil snow in the Gulf of Mexico, the results of which were recently published in the Environmental Science and Technology journal.

Wozniak, assistant professor in the School of Marine Science and Policy in UD's College of Earth, Ocean and Environment, conducted the research while a research faculty member at Old Dominion University. He said that to recreate the conditions of the Gulf of Mexico, he and his collaborators used 100-liter glass tanks filled with seawater collected from the Gulf.

In addition to the seawater, they added plankton collected from coastal waters directly before the initiation of the experiment. They also added the kind of oil spilled during the Deepwater Horizon disaster, along with the chemical dispersant used to break it up, and monitored the tanks for four days.

Particles in the tanks formed on the surface, in the water column and the rest sank to the bottom. Wozniak collected the particles that sank and isolated the oil component to conduct a chemical analysis.

When they performed the chemical analysis and compared it to the initial oil, the samples differed in a way that could be attributed to microbial degradation.

Wozniak said this occurred as the marine oil snow sank through the water column.

When an event like an oil spill occurs, the phytoplankton and bacteria in the ocean interact with the oil — which is bad for them — and they release extracellular polymeric substances (EPS) which collects the oil.

“It's kind of a defense mechanism and because that EPS is sticky, it gets that oil aggregated and hopefully protects them from the oil,” said Wozniak.

The result of the EPS protection is a base particle for other substances to glom onto.

“If something with enough density like minerals form on it, then they'll sink and that's when you get that marine oil snow,” said Wozniak.

By looking at the degraded material at the bottom of the mesocosms, Wozniak could see that as the oil sank through the water column, it provided a microhabitat for microbes and microbes that prefer hydrocarbons and oil-like compounds proliferated.

In addition to supporting that community of bacteria, it also keeps a portion of oil that has been changed — potentially for the worse — in the ocean.

“It may have consequences for the toxicity of the oil because it oxygenates compounds,” said Wozniak. “The oxygenated forms of some of the compounds, like Polycyclic Aromatic Hydrocarbons, tend to be more toxic and so it may have important implications for future study for what's happening in sediments or deep coral reefs.”

The research was supported by a grant from the Gulf of Mexico Research Initiative to support consortium research entitled the Aggregation and Degradation of Dispersants and Oil by Microbial Exopolymers (ADDOMEx) Consortium.