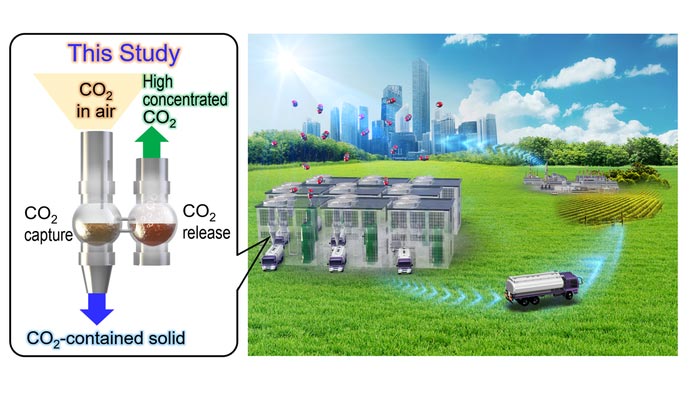 Atmospheric air with low concentrations of carbon dioxide is passed through an aqueous solution of IPDA, where the carbon dioxide rapidly reacts to create a solid product. Carbon dioxide is subsequently re-released with mild heating of the product in suspension, for storage or new applications.
Credit: Tokyo Metropolitan University

Researchers from Tokyo Metropolitan University have developed a new carbon capture system which removes carbon dioxide directly from the atmosphere with unprecedented performance. Isophorone diamine (IPDA) in a “liquid-solid phase separation” system was found to remove carbon dioxide at the low concentrations contained in the atmosphere with 99% efficiency. The compound is reusable with minimal heating and at least twice as fast as existing systems, an exciting new development for direct air capture.

The devastating effects of climate change are being felt around the world, with an urgent need for new policies, lifestyles and technologies that will lead to reduced carbon emissions. However, many scientists are looking further ahead than a net-zero emission goal, to a future “beyond zero” where we can actively reduce the amount of carbon dioxide in the atmosphere. The field of carbon capture, the removal and subsequent storage or conversion of carbon dioxide, is developing rapidly, but hurdles remain before it can be deployed at scale.

The biggest challenges come from efficiency, particularly in processing atmospheric air directly in so-called direct air capture (DAC) systems. The concentrations of carbon dioxide are such that chemical reactions with sorbents are very slow. There is also the difficulty of getting the carbon dioxide out again in more sustainable capture-and-desorption cycles, which can be very energy intensive in itself. Even leading efforts to build DAC plants, such as those using potassium hydroxide and calcium hydroxide, suffer serious efficiency issues and recovery costs, making the hunt for new processes notably urgent.

A team led by Professor Seiji Yamazoe of Tokyo Metropolitan University have been studying a class of DAC technology known as liquid-solid phase separation systems. Many DAC systems involve bubbling air through a liquid, with a chemical reaction occurring between the liquid and the carbon dioxide. As the reaction proceeds, more of the reaction product accumulates in the liquid; this makes subsequent reactions slower and slower. Liquid-solid phase separation systems offer an elegant solution, where the reaction product is insoluble and comes out of solution as a solid. There is no accumulation of product in the liquid, and the reaction speed does not slow down much.

The team focused their attention on liquid amine compounds, modifying their structure to optimize reaction speed and efficiency with a wide range of concentrations of carbon dioxide in air, from around 400ppm to up to 30%. They found that an aqueous solution of one of these compounds, isophorone diamine (IPDA), could convert 99% of the carbon dioxide contained in the air to a solid carbamic acid precipitate. Crucially, they demonstrated that the solid dispersed in solution only required heating to 60 degrees Celsius to completely release the captured carbon dioxide, recovering the original liquid. The rate at which carbon dioxide could be removed was at least twice as fast as that of the leading DAC lab systems, making it the fastest carbon dioxide capture system in the world at present for processing low concentration carbon dioxide in air (400ppm).

The team’s new technology promises unprecedented performance and robustness in DAC systems, with wide implications for carbon capture systems deployed at scale. Beyond improving their system further, their vision of a “beyond zero” world now turns to how the captured carbon may be effectively used, in industrial applications and household products.

This work was supported by Project Number P14004 of the New Energy and Industrial Technology Development Organization (NEDO).