Home / Ecology, The Environment and Conservation / Climate change drives plants to extinction in the Black Forest in Germany
28.10.2020 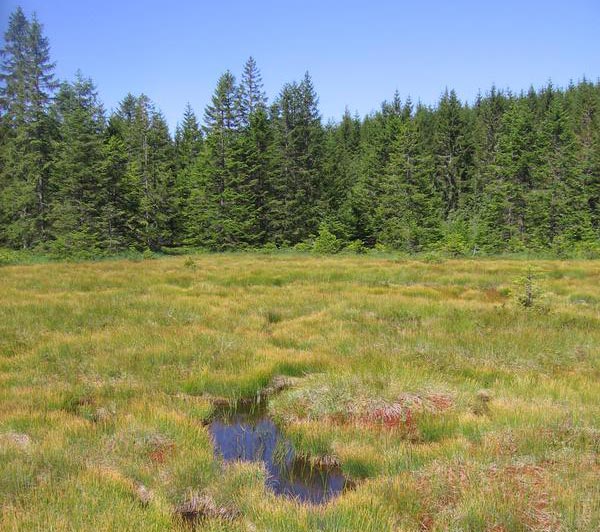 Climate change is leaving its mark on the bog complexes of the German Black Forest. Due to rising temperatures and longer dry periods, two plant species have already gone extinct over the last 40 years. The populations of many others have decreased by one third. In the next couple of decades ten more species could become extinct, researchers from Martin Luther University Halle-Wittenberg (MLU) and the German Centre for Integrative Biodiversity Research (iDiv) write in “Diversity and Distributions”.

There are only a few healthy ombrotrophic bogs, raised bogs and spring mires left in Germany. They used to cover large swathes of north-western Germany. Today they are still found in the foothills of the Alps and on low mountain ranges, for example in the Black Forest. They are very sensitive ecosystems that are highly dependent on certain climatic conditions. “These bogs and spring mires are seismographs of climate change. They react very sensitively to small changes in precipitation and temperature,” says professor Helge Bruelheide, a geobotanist at MLU and co-director of iDiv. Bog complexes also have a very high proportion of endangered plant and animal species.

Bruelheide joined forces with Thomas Sperle, a biologist and wetlands expert, to investigate the trends in biodiversity in bogs and spring mires in the southern region of the Black Forest. The two scientists drew on data from the 1970s about the vegetation of 124 complete bogs. Sperle completely re-surveyed nearly all of the areas over a period of four years. “It is really tricky to prove the extinction of a species for an entire bog. I had to carefully scan the whole area to ensure that specific individuals were not overlooked,” says Sperle. Bruelheide then used the data to analyse the 88 plant species. Two species have already become extinct. The population size of another 37 have decreased by about one third since the 1970s. This has disproportionately affected so-called specialist species that are adapted to specific climatic conditions and make up a large portion of the biodiversity in Germany. However, there were also 46 so-called generalist species that have coped better with the changes and whose numbers have increased over time.

The researchers also checked whether their observations could be explained by other factors, such as the size of the bogs, the distance from one bog to another and whether adjacent areas were used for agriculture. However, no factor could explain the data better than climate change. “Our analyses clearly show that species are declining and dying out in places where it is drier and warmer for longer periods of time in the summer. This is the first indication that climate change has already arrived in our latitudes,” concludes Bruelheide. “It is getting noticeably drier and hotter in the Black Forest, which is why this change is evident there. Presumably, the same thing will happen in other low mountain ranges such as the Harz. Our study can serve as an example for other regions in Germany, but also for other habitats and groups of species.”

In their study, the biologists predict that ten more specialist species will disappear by 2045 if conditions progress as expected. This is an alarming sign as there is no way to counteract this extinction in raised bogs and spring moors. “You cannot really replace missing rain in those bogs,” says Bruelheide.

The new study is an outcome of the iDiv project “sMon – Biodiversity Trends in Germany”. Reliable data on the development of biodiversity are compiled and analysed throughout Germany as part of this initiative. To this end, researchers team up with public institutions and numerous nature conservationists.