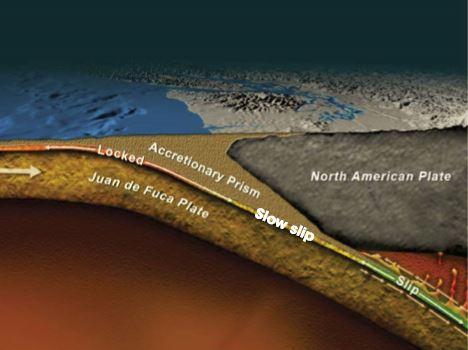 Slow earthquakes happen between the hazardous locked zone and the viscous portion that slips silently. They are found on subduction zones, like Cascadia's, where a heavy ocean plate, in this case the Juan de Fuca Plate, sinks below a lighter continental plate. Credit: Univ. of Washington

A University of Washington seismologist who studies slow-slip quakes has looked at how they respond to tidal forces from celestial bodies and used the result to make a first direct calculation of friction deep on the fault. Though these events occur much deeper and on a different type of fault than the recent catastrophe in Nepal, the findings could improve general understanding of when and how faults break.

The new study, published online April 27 in Nature Geoscience, shows that the gravitational pull of the sun and the moon affect the Cascadia fault a few days after it has started slipping. The timing of movement suggests that the friction at this depth on the fault is only 0.1, roughly that of two pieces of lubricated metal.

“I was able to tease out the effect of friction and found that it is not the friction of normal rocks in the lab — it's much lower,” said author Heidi Houston, a UW professor of Earth and space sciences. “It's closer to Teflon than to sandpaper.”

The surprising results of the new study could help to better model the physics of these systems, and they could even tell us something about the frictional forces in the locked portion of the fault where hazardous earthquakes occur.

The research looked at six recent slow-slip events along the Cascadia subduction zone, one of the best-studied places for these enigmatic slow quakes. The slow quakes are accompanied by tremors, weak seismic vibrations previously thought to be random noise. The tremors begin every 12 to 14 months below Puget Sound, Washington, and then travel north and south at about 5 miles (8 kilometers) per day for several weeks, affecting each section of the fault for about five days.

The paper looks at how the gravitational pull of the sun and moon, which slightly deform the Earth and oceans, affect forces along, across and inside the fault, and what that means for the slow-slip seismic activity more than 20 miles (35 kilometers) underground.

Results show that on the first day of tremors, the tidal forces don't matter much. But starting at about 1 1/2 days — when Houston thinks minerals that had been deposited from the surrounding fluid and that held the fault together may have broken — the additional pull of the tides does have an effect.

“Three days after the slipping has begun, the fault is very sensitive to the tides, and it almost slips only when the tides are encouraging it,” Houston said.

“It implies that something is changing on the fault plane over those five days.”

By averaging across many sections of the fault, and over all six events, she found that the amount of the tremor increases exponentially with increasing tidal force.

Regular fast earthquakes are also very slightly affected by the tides, but they are overwhelmed by other forces and the effect is almost too small to detect.

There is no need for worry, Houston says — even when celestial bodies line up to generate the biggest king tides, the effect would only rarely be enough to actually trigger a slow-slip quake, much less a regular earthquake. But it does tell us something about the physics of a crucial process that can't be easily studied in the lab.

“We want to understand the physics of what is happening, to understand and predict how the fault is storing stress, and how it's going to relieve stress,” Houston said. “Friction is a big piece of that. And it turns out that this part of the fault is much slipperier than previously thought.”

Slow-slip earthquakes relieve stress right where they slipped, but the movement actually places more stress on neighboring parts of the fault, including the so-called locked zone, where a rupture can cause the most damaging type of earthquakes.

In Cascadia's slow-slip events the fault will move about an inch (3 centimeters) over several days, with different parts of the fault moving at different times. When the shallower “locked zone” ruptures, by contrast, a large section of the fault can lurch over 60 feet (18 meters) in minutes. When this occurs, as it does about every 500 years in a magnitude 9 on the Cascadia subduction zone, it generates strong damaging seismic waves in the Earth's crust.

Still unknown is how slow-slip events are related to the more damaging quakes. A shallower slow-slip event was detected in the weeks before the deadly 2011 Tohoku earthquake and tsunami, on a fault like Cascadia's where an ocean plate plunges below a continental plate.

“Understanding slow slip and tremor could give us some way to monitor what is happening in the shallower, locked part of the fault,” Houston said. “Geophysicists started with the picture of just a flat plane of sandpaper, but that picture is evolving.”

The study was funded by the National Science Foundation.