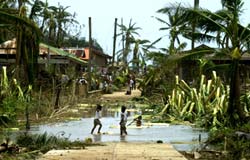 Filipino children play at a flooded portion of the road clamped with toppled banana trees and coconut trees with shredded leaves after Typhoon Nida hit the coastal town of Gigmoto, Catanduanes province, southeast of Manila, Wednesday May 19, 2004. The powerful typhoon triggered landslides, destroyed houses and capsized a ferry, killing at least 19 people and leaving hundreds homeless in the Philippines, officials said Wednesday as the storm blew toward Japan. <br>Credits: AP Photo/Aaron Favila

The 150-kilometre-per-hour winds of Typhoon Nida brought destruction and death to the Philippines this week. At least 31 people were killed and hundreds more were made homeless as the storm passed across the eastern part of the country on Wednesday.

Envisat acquired this image of the eye of the Typhoon on Tuesday 18 May, using its Medium Resolution Imaging Spectrometer (MERIS) in reduced resolution mode. The 1200-metre resolution image is some 1150 km wide.

The storm caused floods, landslides and agricultural damage. Thousands of people were evacuated, houses were destroyed, trees overturned and a ferry was reported capsized off the town of Canotes on the island of Cebu. Nida then switched direction to head in the direction of Japan.

Typhoon is the term used for a tropical cyclone with winds of 119 km per hour or more, arising in the western North Pacific Ocean. The equivalent named in the North Atlantic or elsewhere in the Northern Hemisphere is hurricane.

Whatever their name, tropical cyclones are large powerful storms that rotate around a central area of extreme low pressure. They arise in warm tropical waters that transfer their heat to the air. The warmed air rises rapidly, in the process creating low pressure at the water surface.

The eye of a tropical cyclone is an area of relatively light winds and mild weather found at its centre, the zone of low pressure around which the rest of the storm revolves – the lower its pressure, the greater the strength of the storm.

The Philippines gets struck by around 20 storms and typhoons annually, and already forecasters have spotted another tropical storm – known as Omais – forming east of the country.

MERIS is one of ten sensors on Envisat, looking down from the earthward face of the spacecraft. It works by recording visible and near-infrared radiation reflecting from our planet across a range of up to 15 programmable wavebands, to a resolution of either 1200 or 300 metres.

This flexibility and the excellent radiometric and spectral performance designed into the instrument means that scientists can make use of MERIS data across many different fields, variously obtaining information on Earth’s oceans, coastal zones, land surfaces and atmosphere – and potentially combining it with results from other Envisat instruments.