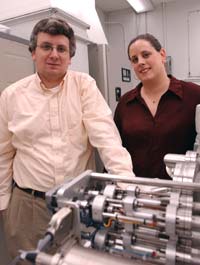 Early life may have lived very differently than life today

As two rovers scour Mars for signs of water and the precursors of life, geochemists have uncovered evidence that Earth’s ancient oceans were much different from today’s. The research, published in this week’s issue of the journal Science, cites new data that shows that Earth’s life-giving oceans contained less oxygen than today’s and could have been nearly devoid of oxygen for a billion years longer than previously thought. These findings may help explain why complex life barely evolved for billions of years after it arose.

The scientists, funded by the National Science Foundation (NSF) and affiliated with the University of Rochester, have pioneered a new method that reveals how ocean oxygen might have changed globally. Most geologists agree there was virtually no oxygen dissolved in the oceans until about 2 billion years ago, and that they were oxygen-rich during most of the last half-billion years. But there has always been a mystery about the period in between.

Geochemists developed ways to detect signs of ancient oxygen in particular areas, but not in the Earth’s oceans as a whole. The team’s method, however, can be extrapolated to grasp the nature of all oceans around the world.

“This is the best direct evidence that the global oceans had less oxygen during that time,” says Gail Arnold, a doctoral student of earth and environmental sciences at the University of Rochester and lead author of the research paper.

Adds Enriqueta Barrera, program director in NSF’s division of earth sciences, “This study is based on a new approach, the application of molybdenum isotopes, which allows scientists to ascertain global perturbations in ocean environments. These isotopes open a new door to exploring anoxic ocean conditions at times across the geologic record.”

Arnold examined rocks from northern Australia that were at the floor of the ocean over a billion years ago, using the new method developed by her and co-authors, Jane Barling and Ariel Anbar. Previous researchers had drilled down several meters into the rock and tested its chemical composition, confirming it had kept original information about the oceans safely preserved. The team members brought those rocks back to their labs where they used newly developed technology -called a Multiple Collector Inductively Coupled Plasma Mass Spectrometer-to examine the molybdenum isotopes within the rocks.

The element molybdenum enters the oceans through river runoff, dissolves in seawater, and can stay dissolved for hundreds of thousands of years. By staying in solution so long, molybdenum mixes well throughout the oceans, making it an excellent global indicator. It is then removed from the oceans into two kinds of sediments on the seafloor: oxygen-rich and those that are oxygen- poor.

Working with coauthor Timothy Lyons of the University of Missouri, the Rochester team examined samples from the modern seafloor, including the rare locations that are oxygen-poor today. They learned that the chemical behavior of molybdenum’s isotopes in sediments is different depending on the amount of oxygen in the overlying waters. As a result, the chemistry of molybdenum isotopes in the global oceans depends on how much seawater is oxygen-poor. They also found that the molybdenum in certain kinds of rocks records this information about ancient oceans. Compared to modern samples, measurements of the molybdenum chemistry in the rocks from Australia point to oceans with much less oxygen.

How much less oxygen is the question. A world full of anoxic oceans could have serious consequences for evolution. Eukaryotes, the kind of cells that make up all organisms except bacteria, appear in the geologic record as early as 2.7 billion years ago. But eukaryotes with many cells-the ancestors of plants and animals- did not appear until a half billion years ago, about the time the oceans became rich in oxygen. With paleontologist Andrew Knoll of Harvard University, Anbar previously advanced the hypothesis that an extended period of anoxic oceans may be the key to why the more complex eukaryotes barely eked out a living while their prolific bacterial cousins thrived. Arnold’s study is an important step in testing this hypothesis.

“It’s remarkable that we know so little about the history of our own planet’s oceans,” says Anbar. “Whether or not there was oxygen in the oceans is a straightforward chemical question that you’d think would be easy to answer. It shows just how hard it is to tease information from the rock record and how much more there is for us to learn about our origins.”

Figuring out just how much less oxygen was in the oceans in the ancient past is the next step. The scientists plan to continue studying molybdenum chemistry to answer that question, with continuing support from NSF and NASA, the agencies that supported the initial work. The information will not only shed light on our own evolution, but may help us understand the conditions we should look for as we search for life beyond Earth.