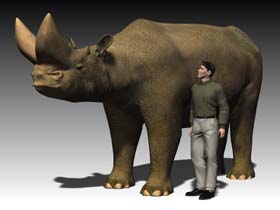 Image: An example of the genus Arsinoitherium, a large mammal of the Oligocene epoch (approximately 24-34 million years ago), with an average-sized modern man shown for scale. <br>Caption: A new species of Arsinoitherium found in the Chilga region of Ethiopia is both the largest (probably standing ~7 feet at the shoulder) and the youngest (approximately 27 million years old) yet discovered. An average-sized modern man is shown for scale. Credit: Trent Schindler / National Science Foundation

An international team of researchers has announced the discovery of new fossils from the highlands of Ethiopia. The fossils fill a long-standing gap in scientists’ understanding of the evolution of African mammals. The results are reported in this week’s issue of the journal Nature.

“The work of this team continues to reveal the extremely rich fossil record encased in East Africa’s rocks,” says Rich Lane, program director in NSF’s division of earth sciences, which funded the research. “It also sheds light on the role pre-modern animals played in establishing the worldwide distribution of mammals today.”

The dynamics of animal populations from 24 million to 32 million years ago has long stood as one of the most poorly known for all of Africa and Arabian, says John Kappelman, a paleontologist at the University of Texas and the project’s leader.

During that time period, today’s Red Sea had not yet begun to rift open and Africa and Arabia were still joined as a single continent that was isolated from the other landmasses by surrounding oceans and seas.

“These are the ’missing years’ for Afro-Arabia,” Kappelman adds, “and what, exactly, happened to mammals during this 8-million-year period has long remained a mystery to science.”

Unlike well-publicized paleontological work reported from much younger rocks in Ethiopia’s fossil-rich Rift Valley, this project is based in the highlands of the northwestern part of the country. The rugged terrain is some 2,000 meters in elevation and consists of massive flows of basalt lava that poured out of the Earth about 30 million years ago. The sediments that contain the fossils were deposited on top of these basalts and are now exposed among agricultural fields in stream and gully cuts.

“Geologists have known about the sediments in this region for nearly 100 years,” says scientist Mulugeta Feseha of Addis Ababa University, “but it wasn’t until we began our study that fossil mammals were discovered.”

The international team relied on high-resolution satellite imagery to find sedimentary rocks located far from the nearest roads and then recorded the position of the fossils with GPS technology. Peter Copeland, of the University of Houston, determined the ages of the volcanic rocks found with the sediments to be 27 million years old.

Several of the newly discovered fossil mammals mark the earliest evidence for some of today’s African mammals, while others represent the last holdouts of species thought to be extinct long before. The team was surprised for example, to find several species of primitive proboscideans–very distant cousins of today’s elephants that were thought to be long extinct. Even more surprising, they were found living side by side with more advanced species that are the ancestors of today’s elephants.

“The story of elephant evolution is one that we have long suspected to have occurred entirely in Africa,” says scientist William Sanders of the University of Michigan, “but these new fossils provide the evidence that we needed to lock down this story. These more advanced elephants were much smaller than today’s African elephants,” he continued, “but at nearly 1,000 kg–about that of a medium-sized Texas longhorn–they were still a bit too big to keep in your backyard.”

Some of the other fossil mammals are even more bizarre. Perhaps the most unusual of these is the arsinoithere, an animal larger than today’s rhino with a pair of massive bony horns on its snout. This species is also a holdover from much earlier times, but the new discoveries show that it too survived through the period of the missing years.

“If this animal was still alive today it would be the central attraction at the zoo,” says paleontologist Tab Rasmussen of Washington University.

The new discoveries from Ethiopia show that mammals of Afro-Arabia continued to evolve and produce new species on this isolated continent during the missing years, but the clock was ticking for many of the more primitive forms.

“At about 24 million years ago the continent of Afro-Arabian began to dock with Europe and Asia,” says Kappelman, “and we believe that event set into motion both the eventual extinction of the more primitive species as well as the modernization of the rest of the African fauna.”

The arsinoitheres and more primitive proboscideans became extinct, perhaps being out- competed by the invading species, while the ancestors of today’s elephants flourished in spite of the new immigrants and managed to carry their adaptations out of Afro-Arabia to successfully colonize the rest of the world.

“More fossil localities closer in age to this major event are needed to fully evaluate the competing hypotheses,” says Kappelman, “and we are now convinced that the fossils are out there waiting to be found.”