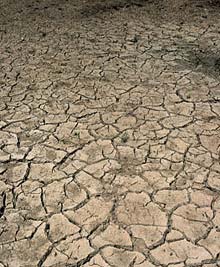 Drought and other extreme climate events may become more likely in the future because of global climate change. (Photo by Carlye Calvin) <br>

Two of the nation’s premier atmospheric scientists, after reviewing extensive research by their colleagues, say there is no longer any doubt that human activities are having measurable-and increasing-impacts on global climate. Their study cites atmospheric observations and multiple computer models to paint a detailed picture of climate changes likely to buffet Earth in coming decades, including rising temperatures and an increase in extreme weather events, such as flooding and drought. The study appears December 5 in Science as part of the journal’s “State of the Planet” series.

The coauthors-Thomas Karl, director of NOAA’s National Climatic Data Center, and Kevin Trenberth, head of the Climate Analysis Section at the National Center for Atmospheric Research (NCAR)-conclude that industrial emissions have been the dominant influence on climate change for the past 50 years, overwhelming natural forces. The most important of these emissions is carbon dioxide, a greenhouse gas that traps solar radiation and warms the planet.

“There is no doubt that the composition of the atmosphere is changing because of human activities, and today greenhouse gases are the largest human influence on global climate,” they write. “The likely result is more frequent heat waves, droughts, extreme precipitation events, and related impacts, e.g., wildfires, heat stress, vegetation changes, and sea-level rise which will be regionally dependent.”

Karl and Trenberth estimate that, between 1990 and 2100, there is a 90 percent probability that global temperatures will rise by 1.7 to 4.9 degrees Celsius (3.1 to 8.9 degrees Fahrenheit), because of human influences on climate. Such warming would have widespread impacts on society and the environment, including continued melting of glaciers and the great ice sheets of Greenland, inundating the world’s coasts. The authors base their estimate on computer model experiments by climate scientists, observations of atmospheric changes, and recorded climate changes over the past century.

However, there is still large uncertainty in understanding the global climate and how it will change, says Karl. If temperatures rise 1.7 degrees, the expected changes would be relatively small, whereas a 4.9-degree increase could bring drastic impacts, some of which may be unforeseen.

Carbon dioxide levels in the atmosphere have risen by 31 percent since preindustrial times, from 280 parts per million by volume (ppmv) to over 370 ppmv today. Other human activities, such as emissions of sulfate and soot particles and the development of urban areas, have significant but more localized climate impacts. Such activities may enhance or mask the larger-scale warming from greenhouse gases, but not offset it, according to the authors.

If societies could successfully cut emissions and stabilize carbon dioxide levels in the atmosphere, temperatures would still increase by an estimated 0.5 degree C (0.9 degree F) over a period of decades, Karl and Trenberth warn. This is because greenhouse gases are slow to cycle out of the atmosphere. “Given what has happened to date and is projected in the future, significant further climate change is guaranteed,” the authors state.

If current emissions continue, the world would face the fastest rate of climate change in at least the last 10,000 years. This could potentially alter ocean current circulations and radically change existing climate patterns. Moreover, certain natural processes would tend to accelerate the warming. For example, as snow cover melts away, the darker land and water surface would absorb more solar radiation, further increasing temperatures.

Karl and Trenberth say more research is needed to pin down both the global and regional impacts of climate change. Scientists, for example, have yet to determine the temperature impacts of increased cloud cover or how changes in the atmosphere will influence El Niño, the periodic warming of Pacific Ocean waters that affects weather patterns throughout much of the world. The authors call for multiple computer model studies to address the complex aspects of weather and climate. The models must be able to integrate all components of Earth’s climate system-physical, chemical, and biological. This, in turn, will require considerable international cooperation and the establishment of a global climate monitoring system to collect and analyze data.

Because of the broad range of potential change in temperature, it’s extremely important to ensure that we have a comprehensive observing system to track unforeseen changes and variations, says Karl.

“Climate change is truly a global issue, one that may prove to be humanity’s greatest challenge,” the authors conclude. “It is very unlikely to be adequately addressed without greatly improved international cooperation and action.”