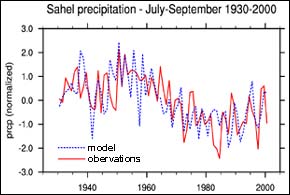 The time series in the figure above represents variations above or below the long-term mean of rainfall in the Sahel region of Africa (located just south of the Sahara, between 10N and 20N). The observed time series is the average of station observations in the region, while the modeled time series is an areal average of the model’s rendition of the variability. The similarity between the two is a measure of the success of the model in reproducing the observed variability, based on the influence of sea surface temperatures only on the global atmospheric circulation, and on Sahel rainfall. Image credit: Alessandra Giannini

A strong link has been confirmed between sea surface temperatures and precipitation in Africa’s semi-arid Sahel, according to a new study published in Science on October 9th. The study was co-authored by Alessandra Giannini, a climate expert with the International Research Institute for Climate Prediction (IRI), a unit of the Earth Institute at Columbia University.

Previously, it was not known how much land use changes may have led to the region’s recent history of prolonged drought, or whether variability in ocean temperatures was the primary driver of the region’s climate. The new study finds that “pervasive evidence” indicates that sea surface temperatures, particularly in the Indian Ocean, are the most powerful indicators of precipitation in the Sahel.

Tropical Pacific surface temperature variation, such as that occurring with the El Niño and Southern Oscillation phenomena, have an effect on the variation of year-to-year rainfall, while the Indian and possibly Atlantic Oceans, affect longer term trends. The new study tracked sea surface temperatures and precipitation rates from 1930-2000, the first time that ocean and climate trends have been studies on a decadal time scale.

As the paper’s authors write: “The recent drying trend in the semi-arid Sahel is attributed to warmer-than-average low latitude waters around Africa which, by favoring the establishment of deep convection over the ocean, weaken the continental convergence associated with the monsoon, and engender widespread drought from Senegal to Ethiopia.”

“What interests me particularly is the potential for seasonal predictions of precipitation in the Sahel, and all the implications and uses for such predictions,” says Giannini. One of the International Research Institute for Climate Prediction (IRI)’s unique strengths is in research connecting climate with health, agriculture, and other human factors affected by rainfall. For instance, at the IRI connections are being investigated between malaria (a wet season disease), meningitis (a dry season disease) and precipitation in Western Africa.

“Land surface factors do feed back into the climate system of the Sahel, but they are a consequence, not the cause, of variability in precipitation,” Giannini explains.

The International Research Institute for Climate Prediction is part of the Earth Institute at Columbia University, the world’s leading academic center for the integrated study of Earth, its environment, and society. The Earth Institute builds upon excellence in the core disciplines –earth sciences, biological sciences, engineering sciences, social sciences and health sciences –and stresses cross-disciplinary approaches to complex problems. Through its research training and global partnerships, it mobilizes science and technology to advance sustainable development, while placing special emphasis on the needs of the world’s poor.